drunk on dreams
by Douglas Messerli

FX series, after their quite excellent American Crime Story based on the murders connected with O. J. Simpson, soon after released another fascinating season based on, not so very particularly, despite its title, on Gianni Versace’s (Édgar Ramírez) murder—but rather on the activities of his killer, the sociopathic gay man, Andrew Cunanan (Darren Criss). And despite his terribly violent activities—which ended in the deaths of five gay men, including David Madson (Cody Fern), the man he loved and wanted, incredibly in an era in which gay marriage was not possible, to marry and raise a family—this movie, going and forth between time between nine-1-hour episodes, actually transforms Cunanan into a kind of tragic would-be Gatsby, a natural loser in a society that lionizes wealth and what used to be called the desire for “The American Dream. 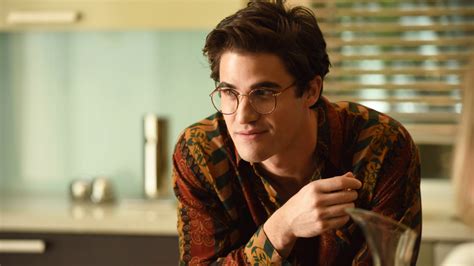 Cunanan, unfortunately, despite the advantages his family attempted to provide him with—an education in a prestigious private school, a master bed-room, and a college education at the University of California San Diego—was an outsider from the start. The son of a doting but somewhat psychotically disturbed Italian mother (Joanna P. Adler) and a smart Philippine father, Modesto (Jon Jon Briones) who bartered his way into being a stockbroker and preyed on elderly men and women, and who, finally, was tracked down by the FBI for his corruption—from the start had no possible entry into the world which he had been taught was his for the taking.
What he never perceived, and which makes him detestable, is that the world was not his for the asking, the fact that he needed to work for it—a lesson that is reiterated again and again in this film (one of the works its obvious flaws in its repetitions) by his elderly rich male lover, Norman Blachford (Michael Nouri), by his friend, and by several others, working endlessly hard to make their lives meaningful. Andrew, who has dropped out of school, clearly wants it all without any effort; and when he demands precisely that from Blachford and is rejected by his requests, he spins out into drugs and a kind of mad terror that ends in the wealthy elderly gay Lee Miglin’s (Mike Farrell), an ex-Navy highly decorated officer, Jeff Trail (Finn Wittrock), and ultimately in Madson’s deaths. The spurned Cunanan cannot deal with the facts of his own life. 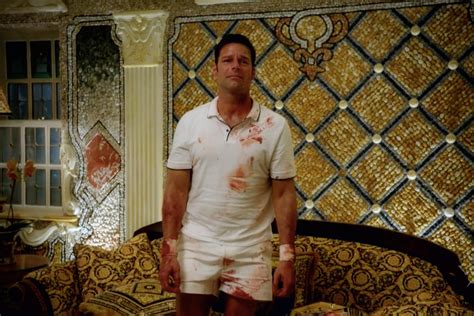 As I told Howard, while watching the series, it was, as Ford Maddox Ford begins his famous novel The Good Soldier, one of the saddest stories I had even read.
Although you can’t exactly feel sorry for Cunanan. He expects everything to simply be handed to him—wealth, love, happiness—by those around him; he even gives away any money he may receive to achieve these goals, including handing over his paltry earnings from gay prostitution in Miami to a local AID’s victim, and flying in his would-be Minneapolis lover on a first-class flight to a 4-star hotel in San Francisco. This is a man who cannot comprehend that money, however meaningless, comes from true work. As smart as he is, he cannot comprehend that knowledge is acquired from reading and study. His obsession with Versace and the fashion world is simply an indication of his cultural emptiness. 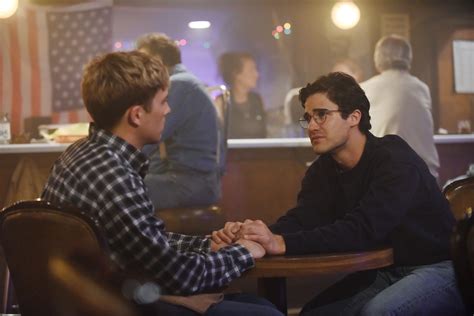 Meanwhile, at the Versace palace, things are not much better. Versace might seem to have it all, a wealthy life, the love of another young male consort, in this case the handsome Antonio D'Amico (Ricky Martin), utterly hated by his sister, Donatella (Penélope Cruz), who—except for
the murderer, Cunanan—is perhaps the real villain of this series. The Versace estate denying most the reality of the work, claimed that Versace had never had AIDS. Donatella, in real life and on screen refuses to reveal her brother Gianni’s gay attractions and, even more significantly resists his attempt to admit to his having become HIV-positive. Even an interview he is determined to have with  the gay magazine The Advocate is a cause for battle.
Her solution to her brother’s sudden loss of hearing is that he has cancer of the ear. Her hatred of Antonio is palpable, and forces Gianni to impose a pax Familia so that he might die with some calm. He tries, moreover, to bring her into the fashion world by co-designing a dress of her imagination, which is a great success at the shows, but an utter financial failure given that no one might wish a dress that expresses their feminine militant desires.
Gay men, living with older lovers are clearly, in this film, individuals not to be loved, represented as they are as merely young men who suck the money out of their lovers. But there is clearly a difference in Tom Rob Smith’s scripts. Cunanan is all about dependence, while Antonio does truly express affection and love.

Both end badly, of course, particularly given the FBI’s and police disinterest in actually seeking out and finding the true culprit. Even the local Miami detective realizes when they arrive that they are not truly interested in discovering the actual murderer. They don’t even have enough copies of Cunanan’s photo to distribute to the local gay bars. They have little strategy in how to find him. They stumble through the reality they don’t want to face, leaving hundreds of obvious clues behind.
At one point a figure makes it clear when the killer goes missing: “Andrew is not hiding. He’s trying to be seen.” It is a tragic reality made so very obvious that you want to cry. Despite his several murders, this man has done the horrendous deeds simply to bring himself the attention he so desires.
Cunanan’s descent, long in the making, ends in his hide-out in a temporarily abandoned house boat where he is forced, without access to the world and with no money, to eat dog food.
As the police move in, he takes the gun which has killed many of his victims and pulls the trigger into his own mouth.
When Antonio is told by Donatella that any of the houses he might have lived in is now the property of the Versace estate, he swallows the dozens of pills that kill him. Both have been, so unfortunately, “Drunk on Dreams.”

Posted by greenintegerblog at 11:29 AM