tearing up the script
by Douglas Messerli

Satyajit Ray’s 1966 film, Nayak, is one of his oddest works. Unlike the long narrative arcs of the Apu trilogy or the moral urgency of films such as The Stranger or An Enemy of the People, or even the historical ennui of The Music Room, Nayak is basically a talk-piece spoken to a somewhat inexperienced journalist by an insecure Bollywood actor as the two speed through the countryside on a train headed to Delhi.
Although there is something touching about actor Arindam Mukherjee’s (Uttam Kumar) self-revelations and, perhaps, something uplifting in Aditi Segupta’s (Sharmila Tagore) patience and determination, finally, not to publish the somewhat tawdry history of his life he has shared with her, it doesn’t really add up to a truly significant tale. 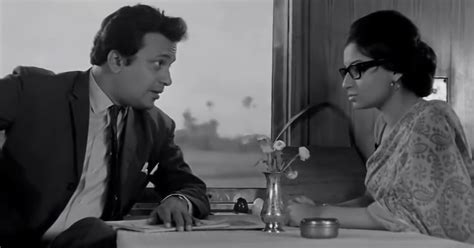 A bit like Hollywood fables of major film stars such as The Goddess and A Star Is Born Mukherjee’s story tells of sudden rise as a “hero” of Bollywood films—his early abandonment of theater and his mentor Shankar-da; his fears and distress with working with the haughty elderly star Mukunda Lahiri (Bireswar Sen), nicknamed “The Voice,” and later his revenge against the aging actor; and his affair with a married actress Promila Chaterjee (Sumita Sanval), with whose husband he has just the day before had an altercation in a bar, and now reported in many of the newspapers.

Yet, these standard tropes of the rise of stardom don’t really add up to much. The most surreal scene in the film, and perhaps its most memorable, is Mukherjee’s dream of being swallowed up in piles of money. It’s hard to gather up much sympathy for this guilty fantasy about his success.
It’s even more difficult to believe that this all might lead to his possible suicide, since he is on his way to receive a prestigious award. But, obviously, that is part and parcel of so many of these kinds of movies.
Yet, Mukherjee is no Marilyn Monroe, Judy Garland, or even Lady Gaga. And it is difficult to even perceive why this rather chubby actor has become such a celebrity, even within the commercial Bollywood system. His interlocutor, Sengupta, who edits a woman’s magazine, is herself sarcastic about his career, and secretly plots to take notes about what, quite inexplicably, he is revealing to her. Perhaps it is the fact that she is not a sycophant, as so many of the other travelers and even people along the route are. She is smart and independent. There is no reason other than she might widen her audience for her to interview him.
The most interesting aspect of Ray’s film is that, despite her secretive note-taking, she finally emphasizes with him and, after his suicidal suggestions, tears up her notes after returning his safely to his train cubicle. 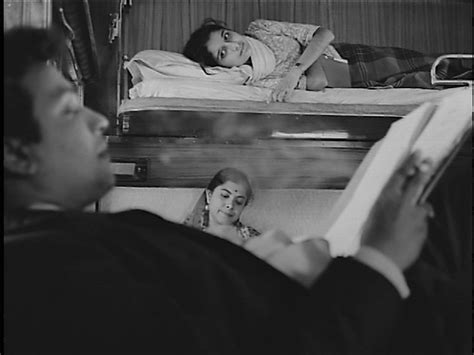 Yet, of course, Ray, who probably knew the Indian film industry better that anyone, clearly does tell Mukherjee’s—and others like him—story, so perhaps her good deeds matter very little. If she might have been presented as a kind of heroine, in the end, the director himself undoes her good deeds by revealing what she has uncovered—unless he is suggesting that we might also tear up his script.
In short, there is a kind of missing morality in this tale that is generally always at the heart of Ray’s great films. Everyone, except perhaps for a feverish (running a fever and highly excited about sharing a room with her cinematic hero) young girl, is caught up in his or her own prejudices and fantasies; the “hero’s” fans as well as his detractors equally make it difficult to feel much for either them or for Mukherjee.
And by the end of Ray’s work one has no sense that anyone has been transformed by the series of confessions that the actor has made. The film industry—just as Ray proves through this production—will simply go on, with light and shadows creating a world of fantasy that makes its actors rich and turns its audiences into somewhat mindless acolytes.