Abel Gance | End of the World

a dying society
by Douglas Messerli

Abel Gance’s 1931 film End of the World certainly did represent the “end” of a very important thing: the director’s career as a great cinema pioneer. The original film, lasting more than three hours, was edited down by his producer Vladimir Ivanoff—with a janitor, so Gance quipped—to 105 minutes. The acting, moreover, as a critic of the day, Philippe Soupault, wrote, “is a mixture of the pretentiously naïve and the blatantly unrealistic, of the pompous and the trivial.” Gance, playing the role of Jean Novalic, a suffering philosopher-actor idealist, helplessly in the love with the film’s heroine, Genevieve de Murcie (Coloette Darfeuil), was particularly morose and melodramatic in her declamations. Darfeuil’s performance was also more in line with the gestural acting traditions of silent film. 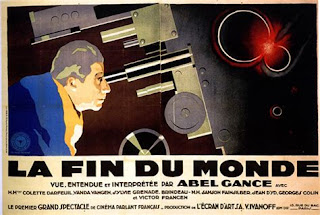 In fact, had this movie been a silent film, it might have gotten away with its melodramatic conventions; as one the first French talkies, released just as Jean Renoir, René Clair, and Jacques Feyder were coming into their own, it was doomed. Gance’s acclaimed career quickly took a nosedive.
Yet, for all that—and despite the fact that the acting and plot both are, at moments, nearly unbearable to watch—End of the World is a fascinating piece of filmmaking. Very much of its day, with World War II fulminating across the European landscape, the film is based on Camille Flammarion’s pre-World War I novel, Omega: The Last Day of the World. Gance and his co-writers took the science-fiction drama of that novel as a metaphor for what was happening in world politics, suggesting that perhaps only the impending death of everyone on the planet—in this iteration through the cataclysmic crash into earth by Lexell’s Comet—might possibly bring the nations together just long enough to escape the devastation of the impending World War. In short, Gance uses science fiction as a potential to avert the inevitable destruction that actually faced his own audience. 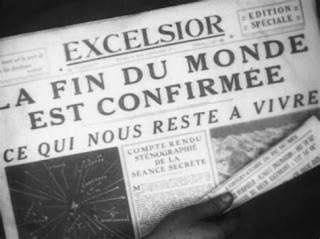 The film, in fact, is at least in its metaphors, quite prophetic: the world is almost destroyed, devastating numerous cities and cultures, yet is saved for its tortured survivors. Forget the twisted plot, wherein the idealist Jean’s brother, Martial (Victor Francen), a great scientist and Martial’s financier, Werster (Georges Colin) attempt to save the world from the Machiavellian forces of the (unstated but obviously Jewish) wealthy munitions supplier, Schomburg. The blonde beauty Genevieve, in a series of reversals that strain credulity, falls from grace to decadence—and is punished with death in the elevator of the Eiffel Tower.
The story is simply a froth stirred by Gance (and Flammarion before him) into their moral denunciation of impending war(s) and the end of the world as they know it. The real issue of this movie is the salvation of mankind in a manner that few filmmakers of the day might have bothered to express it. For comparison one might just mention Renoir’s—far aesthetically superior but entirely satirical—The Rules of the Game released at the very edge of the war in 1939. In 1931 Gance was entirely serious; he clearly saw the dangers and willing, at least, to treat the issue with a dire seriousness, perhaps to his own detriment. (I should note that by the time The Rules of the Game reached French audiences, they could no longer laugh at the approaching devastation. It makes one wonder whether anyone looked bac at Gance’s drama with regret for having mocked it.)
The real wonderment of this film, however, is its cinematic experimentation. I one can forget the bad acting, overlook the clumsy cuts that leave the story in mid-action, and blink through some of the overblown aspects of the narrative, such as the comparisons drawn between the scientist-savior Marial Novalic and Jesus Christ, it is still possible to be highly entertained by the cinematic brilliance of Gance’s End of the World, a work far ahead of its time. 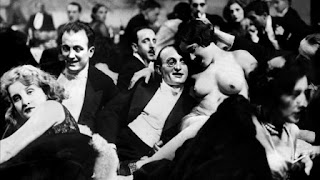 There is a night scene in which the lights from a flotilla of boats are paralleled by the sky lit-up by fireworks—just moments after Novalic has discovered that the Earth is to be destroyed by a comet in 114 days. Even if one ignores the surrealist, slightly disturbing, symbolism of white pigeons perched on the body of the dying Novalic, who can dismiss the dynamic mese-en-scène during the attempts by that character’s forces to take down the broadcasting tower atop the Eiffel Tower. Few films before the 1960s can compear with the sheer technical intensity of this battle. Here the film cuts are incomparable.

Too bad that this movie came at a moment in French culture when people were desperate from something “new”; by decade’s end they would be doomed by the old.