Agnès Varda’s last work, made with photographic artist JR, is an odd documentary, even given her rather eccentric (and I mean that in the best possible way) career. Faces Places (Visages, Villages) follows the pair, this time Varda offering ideas and camera angles more than directorial content, as JR and his photography truck travel throughout rural France snapping shots of individuals, factory workers, farmers, and others, and then blowing them up to large black-and-white posters, which JR 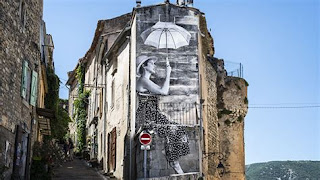 and his crew then paste to the sides of buildings, factories, and barns. One of the most touching of sequences is when she and JR photograph the hard-working wives of three local dockworkers, posting them across stacks of cargo containers, the men totally enjoying the fact their wives have finally become visible to their workers, but with a slightly misogynist slant that suggests that these 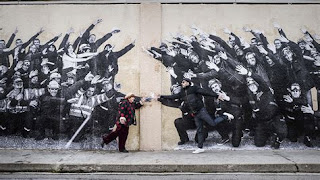 women are still being “contained.” “This will give a totally new perspective” says one of the husbands. But one of the wives is bit frightened for sitting on a high container just beneath the head of her photograph. 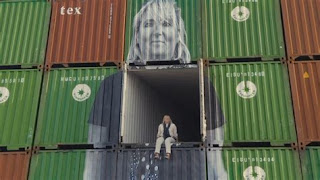 It’s such a simple premise that my review might stop here. The joy in the film comes primarily from the lovely, if brief, interchanges between the then 89-year old director, in her double dyed hairdo seemingly always joyous and curious about everything she encounters, which links this film a bit with her previous The Gleaners. But if in that earlier film Varda sought people who picked up food and products which others had left behind, here, the unknown figures, in some senses, are unknown heroes in their small town and rural isolation.

Almost all of them seem absolutely delighted to be photographed, and even more awed by the monumentalism of their faces, proudly pointing out their images in the group portraits, and delighted to become rather famous in the towns and country neighborhoods in which JR’s and Varda’s larger-than-life portraits have now been placed.
In a sense these unknown folk, who work at simple and back-breaking jobs or simply have outlived others not so fortunate, have suddenly become the heroic figures they might always have wished to have be. Instead of the monuments to the great—so pervasive in French life, particularly in the major cities—these hard workers finally receive their own, if temporary, due.
We are never told just how permanent JR’s outsized portraits are, and how quickly in the rain, heat, and winds, these testimonies to their very existence will last. Surely for enough time for them to claim some sense of temporary fame.
But that may not really matter, because JR’s camera as well as Varda’s several cinematographers, Romain Le Bonniec, Claire Duguet, Nicolas Guicheteau, Valentin Vignet, and Raphaël Minnesota, have also captured their faces on a film which they may never see. But we, the audience, recognize this as a kind double tribute accordingly, one at the local level and the other on the international (this film was shown at the Cannes, the Toronto, and other film festivals, winning several awards along the way). And their rugged faces and their open demeanor reveals them, if only briefly as actors far better than those in most of cinema. 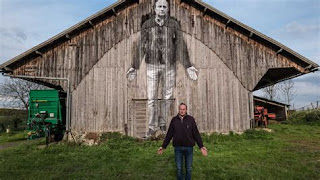 Like Bresson, Varda, in this film, uses people untrained to act, but they act so very unassumingly that each of them should win an award, which perhaps they unwitting did when the film was chosen for France’s highest prize for a documentary at the  César Awards in 2018.
Along the way the director expresses her joie de vivre, even laughing at herself and the impossible project she and JR have undertaken. At one point she poignantly recalls visiting famed French write Natalie Sarraute near where they snap another photo.
Near the end, JR determines to take pictures of Varda’s eye, now nearly blind, and her small feet, blowing them up and pasting them the sides of railroad oil cars. The railroad-head approves, telling Varda that she will now be taken to places she has never before been. It’s a touching conclusion to this highly populist film. 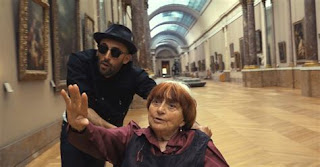 At another moment the film goes back in time to show JR rushing Varda, seated on a wheelchair, through the Louvre Museum in a kind of unspoken contest with Godard’s quick run-through that institution in one of his films. It is a lovely comic moment, as Varda calls out her favorite paintings as the photographer rushes her by them one by one.

Varda, in turn, has a surprise for JR. She has made an appointment with Jean-Luc Godard, presumably for her final picture-shoot of the great director. But when they arrive, Godard is not there, presumably having bolted.
One of my friends suggested that this passage of the film was immensely sad. But Varda, herself, proclaims that Godard is a solitary philosopher, which cinema needs in order to survive. Yet, underlying her defense of him, we also perceive that it was Varda, herself, who had the best instincts. Celebrities are not, perhaps, the greatest subjects for film. The ordinary people, running wild in the streets, gathering up things that the society-at-large no longer wants, and workers living in near-solitary in small rural communities are far more interesting in the end. These people are truly appreciative the art she creates about them and their lives.
Los Angeles, May 3, 2019
Reprinted from World Cinema Review (May 2019).