Aki Kaurismäki’s 2017 film The Other Side of Hope—which he, sad to hear, declares will be is lost—is about a group of lost people, a Finnish businessman, Waldemar Wikström (Sakari Kuosmanen); a Syrian refugee, Khaled Ali (Sherwan Haji) who, having just arrived on a cargo ship hidden in a coal container—the first few scenes simply show him washing the coal off of his body—seeks the where-abouts of his sister and asylum in Finland; and Mazdak (Simon Hussein Al-Bazoon), an Iraqi refugee, who, after meeting Khaled in a waiting station, becomes friends with him. 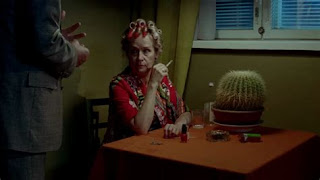 As with so very many individuals fleeing their war-torn and financially decaying nations, things quite obviously do not go well with Khaled, who, focusing on his attempts to find his sister, Miriam (Niroz Haji) instead of his own needs to find a new home, is turned down for asylum. And one fears, early on in this film, that we will be witnessing another sad tale of the destruction of a human being who will be returned to a world—in his case the epicenter of the Syrian struggles, the city of Aleppo—where he will surely die. 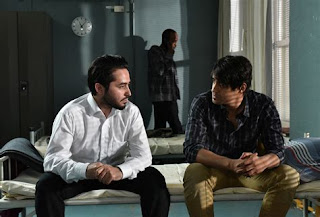 Yet, much like the wonderful Belgium filmmakers the Dardennes brothers, Kaurismäki is one of the most humane directors of the late 20th and early 21st centuries. Events turn in strange ways, as individual resolve and society itself sometimes for people to come together in multicultural patterns in which we might have never expected.

In this film, the sad sack Waldemar, after leaving his clearly unappealing wife (Kaija Pakarinen), sells the rest of his stock of shirts, enters a backroom gambling room of a local casino, and wins big—maybe one of the largest gambling miracles since Wayne Kramer’s film The Cooler—allowing him now to finally able to buy into his dream, in this case a local failing restaurant, whose employees have not been paid for months.
As in so many of this brilliant filmmaker’s works, hope is suddenly restored, even if the workers—the doorman Calamnius (Ilkka Koivula) and the waitress Mirja (Nuppu Koivu)—originally doubt Waldemar’s abilities. 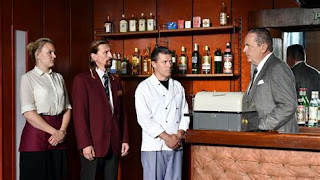 Despite their fears, however, he pays them back wages and gradually revives the café, even if it remains a rather dumpy place. The same theme, was, in fact, played out in Kaurismäki’s 1996 film Drifting Clouds. And now both Waldemar and his eccentric staff seem to have found their rightful homes in the same nation from which Khaled has been excluded.
Yet the resilient Khaled miraculously escapes his detention cell, living for a while on the street where he is nearly incessantly attacked by roving Finnish thugs.
It is strange that when Clark Coolidge and I went walking in the only night in Helsinki I ever experienced, we too, in this wealthy and beautiful city, were attacked by just such a gang, who backed off when they perceived us simply as American tourists. But they were clearly out for blood for any possible immigrant or person who might wish to enter their sacred society. Even if nothing happened in that incident, it scared me. Were the Finns really such a violent people as the Americans are in so many parts of the country? Yes, I realized. Every country has its rightists who want no one to intrude upon their territory.
These cinematic villains even attempt to set the Syrian afire, until he is saved by some locals, and finally, after being found as living by Waldemar’s restaurant dumpster, is put to work at the café. If he begins simply as a busboy and dishwasher, he soon assumes larger roles, and grows to love his secret immigrant life in Finland, particularly after Waldemar helps to get him a green card and allows him a basement corner in his own apartment for sleep, toilets, and showers. 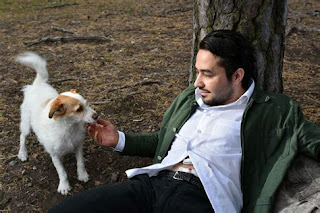 Mazdak reappears with Khaled’s sister, found working as a prostitute in Lithuania, and who has probably been raped by the trucker who directs Mazdak to her location. If she is not entirely happy with her reunification, the always believing brother does not quite comprehend her contentions.
Returning home one night, however, he is again attacked by the ever-present street gangs who want his kind out of the country. These are the kind of people who our current president encourages. And, in this case, they stab him with the intention of murder.
The lost, but reborn, Waldemar follows the pools of blood to discover his new employee-friend sitting on the bank of a river, smiling, despite his serious wounds, as a friendly dog licks his face.
We know, that if he survives, Khaled must encounter further tortures. But, in his own mind, at least, he is now Finnish, ready to learn that difficult language and remain in a brave new world in which he will always have to struggle to survive.

Posted by greenintegerblog at 9:44 AM