Ingmar Bergman’s 1948 film Port of Call was his third feature. Although it does yet reveal the artistry of his later movies, it is still a fascinating work and is well worth seeing, at times extremely moving while pointing to several of his later concerns.
Generally, it has been described as a neorealist work, particularly because at the end credits mention of the director Roberto Rossellini. Yet I have always questioned most of the notions that critics have about neorealism, arguing that, in reality, these are quite romantically conceived films that pretend a kind of realism that Rossellini, in particular, eventually abandoned. Certainly this film has very little connection with someone like De Sica’s Bicycle Thieves.
Bergman’s work, as critic David Blakeslee suggests, may have more connections with the poetic realist French films, one of which, Marcel Carne's film of a decade before, Port of Shadows, which is obviously hinted at in Bergman’s Hamnstad (its Swedish title which more literally means Port Town). The gritty work was filmed in the Swedish city of Götenberg, on Sweden’s west coast (strangely the only Swedish city I have ever visited), and represents a world obsessed with the hard work at the docks and of the poverty of its citizens. In the end, I might say that Port of Call reminds me more of the great late 19th century realist-writer Émile Zola than its mid-20th century counterparts.
Bergman’s film, moreover, is highly linked to the sea (after all for much of his later life the director lived on an island), and in the film’s first few scenes we see long-time sailor Gösta (Bengt Eklund) on his way back to port to become, once again, a land lubber; yet at almost the very minute Gösta, symbolically speaking, “jumps” ship, he witnesses a young woman, Berit Irene Holm (Nine-Christine Jönsson), leap into the harbor in an apparent attempt at suicide. The young sailor has no choice, as the hero of this piece, but to jump into the water and save her, despite her vehement protests. 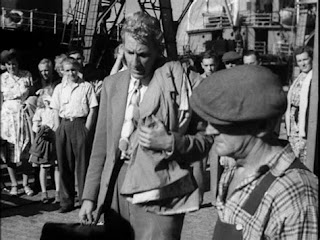 These two, we immediately perceive, will be intrinsically intertwined. And the rest of the film, in part, is a kind of study in how this version of Nana has come into the situation in which Gösta first encounters her.
The sailor is quite obviously a quiet and thoughtful guy—after all in one of the first scenes he is reading the read Swedish naturalist Harry Martinson—but in his shy demeanor he seems easily manipulated by his friends, who offer him a bed in their small apartment, help get him a job at the local dock, and insist that he put down the book and go out with them dancing on Saturday night.
It is there, at the dance hall, after being dragged around the room by a gum-chewing teenager, that he reencounters Berit, the two of them immediately interested in each other and quickly escaping the noisy and crowded hall. 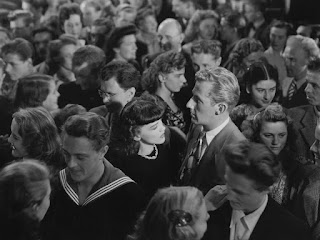 Berit drags him to her family home where she lives with her over-controlling and apparently religious mother, who happens to be away for the night. If Gösta is hoping for sex with the pretty girl, he should be a bit clued to her past, when, after offering him coffee, she quickly undresses and lures him into bed. But this former sailor, so long away from the company of women, is a bit clueless, as he almost immediately begins to court her, making another appointment, and, upon her birthday, whisking her away to a day of romantic paradise the likes of what we now perceive—given Bergman’s toggling between present and past with a rather old-fashioned use of flashbacks—she has seldom experienced in her unfortunate past.

Their relationship might almost have moved swimmingly forward, were it not for the continued abuse of Berit’s mother, who whenever her daughter encounters a man threatens to send her back to reformatory school. Fortunately she has a boss in the ring factory in which she works intervenes, freeing her, at least temporarily, from her mother’s retribution. The pretendingly kind juvenile office is right out of a novel by Charles Dickens.
But as Berit increasingly falls in love with her new Romeo, she becomes determined to tell her story, despite Gösta’s suggestion that he need not hear it (“We all have a right for our own lives”), revealing the endless battles between her father and mother throughout her childhood, her sexual rebellion, her several years in a reform school, and other details, all of which end up shocking the somewhat innocent would-be lover. 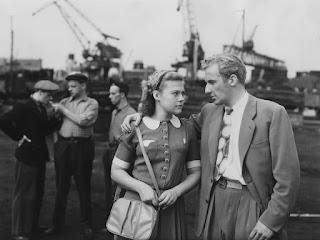 When a prostitute friend of Berit’s, Gertrud (Mimi Nelson), discovers that she is pregnant, she turns to an illegal abortionist, who feeds the girl a toxic mix of something which ends in her death in Berit’s house, bringing the apparent "sinner" to the police once again. Disgusted with the torridness of it all, Gösta gets drunk, hires a prostitute, and goes nearly mad, breaking his liquor bottle against the bed and almost abusing the woman. Ultimately, he is locked by her john into the courtyard from which he cannot escape.
Critics have mentioned that Bergman was later sorry for this scene, wishing he had never shot this quite melodramatic episode. But actually it is interesting if only because Gösta himself now must experience what Berit has for most of her life: despair, anger, and imprisonment. He might as well now be on that pier about to slip into the waters of death. And in this scene, moreover, we see the character playing out a theme that will recur again and again in Bergman’s work: he is a man conscience suffering for that very fact.
The seemingly tacked-on ending plays that sense of “conscience” out in literal terms, as he finally tracks down Berit again, the two possibly ready to begin the reparations between them and their own pasts. As Blakeslee points out, if this ending seems a little too easy, so too would have been the couple’s total separation and/or deaths. In Port of Call everything is simply open, allowing the characters to determine their own futures, their own lives.
No, this is not Bergman at his prime, but is a work that shows his mind brewing the many tensions between men and women, and women and women that are at the heart of his great works.

Posted by greenintegerblog at 8:52 AM