appreciation and confusion
by Douglas Messerli

The first time I saw Luchino Visconti’s Death in Venice, in its 1971 premiere, I was not particularly impressed. The film seemed static, and too dependent upon the Gustav Mahler connection through its music, who himself in 1870 announced that he was gay, despite his marriage to Alma, who went on, after his death to marry Walter Gropius and Franz Werfel. I found the movie by Visconti languid and too fawning about the young Polish young beauty Tadzio (Björn Andrésen). I might, in those days, even agree with Roger Ebert’s assessment:

Visconti…misses, or avoids, the subtlety of the novel's development of the relationship between the two characters. In the Mann version, the man can never really know what the boy thinks of him; they do not speak, and if the boy favors him sometimes with a look or a smile, he favors many others as well, because that is his nature. It is entirely possible, the way Mann tells the story, that the boy is totally unaware of any homosexual implication -- and the man, indeed, may also be in love with an ideal rather than a person. No such possibility exists in the heavy-handed Visconti retelling. The boy's function in the film, which he performs at least two dozen times, is to self-consciously pose in front of the man, turn slowly, smile sweetly, and turn languorously away. This is almost literally the only physical characteristic the boy has in the movie; and Visconti lays on the turns, looks, and smiles with such a heavy hand that the boy could almost be accused of hustling. 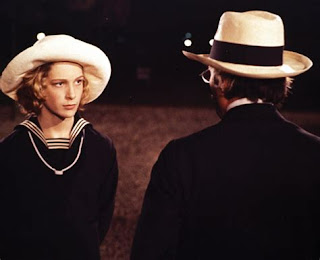 But this time, I saw the film in a completely different light. The suffering artist, Count Aschenbach (the great actor Dirk Bogarde), simply does not quite know what has come over him in being so attracted to this young being, and Tadzio doesn’t quite comprehend what to make of the heavy male gaze. In fact, the young beauty is probably gay, without his even knowing it. The strange Wikipedia entry describes him as “being beaten up on the beach by an older boy” on the beach, when anyone with two eyes can see the two lovely young men are simply sexually driven to one another, grabbing at one another’s bodies in an attempt to communicate their sexual desires.

Tadzio’s constant turns to the elderly Aschenbach are both an admittance of the observation of his body, but also represent an utter confusion. Why is the old man looking so intentionally at me all the time. Sexual appreciation and confusion seem to be what is at the center of Visconti’s film: I like that you looking at me, but why? For the sad, gradually dying Aschenbach, the same questions might be asked: “Why am I so very attracted to this boy and I love just looking at him, which reminds me of all my youth and sexuality? In a sense the two are destined to a world which is dying around them—in this case with the composer’s heart disease and a cholera epidemic which no one around them seems to be able to tell the few guests left in the city is occurring.

Neither of these tragic figures—we might well presume the young Tadzio dies in the epidemic just as Aschebach dies of heart disease—can comprehend one another.

I once had a professor at the University of Wisconsin, Thomas Vogler, who taught Mann’s Death in Venice, who dared to declare in his classroom that the real problem of this work was that Aschenbach never declared his love to Tadzio.
I remember discussing this once with my friend Martin Nakell, and both of us laughing the audacity of this professorial statement. But, after seeing this film again, I think he may have been right. Had the elder man simply told the young boy that he loved him, that, for him, he represented the beauty of youth he had lost, then both might have comprehended where they stood, man and boy. Sex was, obviously, an impossibility, but the comprehension of desire might have released both of them from their endless exchanges of eyes. The boy would have known where he stood, and the old man might have recognized how his intense gaze was a kind of child abuse. Or perhaps they might have found a kind of middle-ground. You like me for my beauty, and I like you for your appreciation of what I represent. Mann’s short novel suggests such a possibility, the ambiguity which Ebert missed in this film.
The day I chose to watch Visconti’s classic film, my computer was inexplicably not functioning, and I was forced to view it on out TV, on which films, no matter how loud we register them, sound always muted. It was, however, not a bad choice. For Death in Venice, in the end, is a kind of silent movie. Except for the Maler score, hardly anyone speaks, and when they do it is with quiet gestures and almost mute statements. This is a film (and even in Mann’s version) a work of quietude. No one really says what’s truly on their minds. The water laps up to their feet, their hips, and, if you listen attentively, the Venice ocean waters slurp into the city. You can hear them quite clearly, but the character’s voices are always at a hush. Polite, refined, unable to express themselves, the figures are entrapped in the sinking city, unable to express their obvious desires. In the oceanic influx, Tadzio’s and Aschebach’s bodies become utterly intertwined.

Posted by greenintegerblog at 12:18 PM