Victor Sjöström | Terje Vigen (A Man There Was)

Generally described as the beginning of the “golden age” of Swedish silent filmmaking, Victor Sjöström’s Terje Vigen (A Man There Was) is a powerfully unusual work in that it is based on an historically-inspired poem by Henrik Ibsen. Moreover, few films spend as much time simply observing the lap of the waters on the sea; even Moby Dick doesn’t expend as much energy on simply studying the roll of waves. 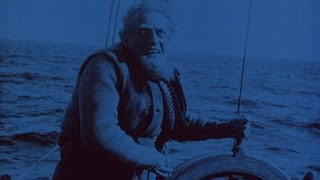 But then the major character of this work, Terje Vigen (played by the director himself) is a sailor who in the earliest scene returns from a long sea voyage to his island home, now determined to remain with his wife (Bergliot Husberg) and his very young daughter. All seems joyful until in the 1809 English blockade the poor can longer get food to feed their families and quickly discover themselves near starvation.
The seaman, Vigen, is determined to do something about it, taking a small boat to Denmark in order to buy provisions, while outsmarting the British navy by covering his boat over with branches. He successfully purchases the food and is headed back home when a British frigate spots him. 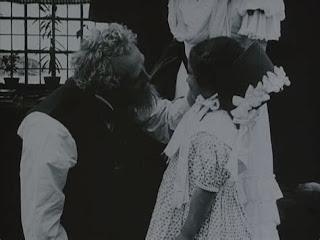 The English captain, seemingly without any human feelings, captures the former sailor and sends him off to a British prison for five years.
Almost inevitably, upon his return to his seaside home Vigen discovers that in his absence his wife and child have died. Vigen has now no choice but to live out the rest of his life in utter loneliness, with the sea as his only companion. The brilliant cinematographer Julius Jaenzon and Sjöström himself play out this horrible solitude with a kind of lyric grandeur that clearly attempts to match Ibsen’s poetry, as the constantly roiling sea becomes a metaphor for both his isolation and a sense of endless placidity. Without his desiring it, the sailor has now returned to the kind of longing he expressed early in the film for love and the hearth of home. 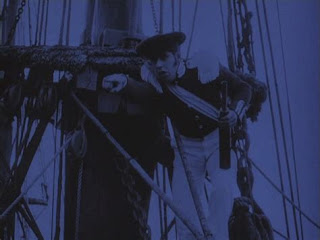 Yes, there is a certain sentimentality to all this. And not much happens for the entire second section of the movie. But the final sections of this cinematic prose-poem return us to the adventurous life that Vigen previously lived, as he spots a small yacht ready to break apart in a heavy storm.

A good man still, Vigen quickly rushes out—again in the kind of boat which resulted in his imprisonment—to save those whose lives are in immediate danger. He succeeds in saving them, only to discover that the man he has rescued is the same sea captain who has previously destroyed his own happiness.
The innate pacificism of the Swedes might not be better expressed by Vigen’s determination to not seek revenge, but simply bring the captain and his wife (August Falck and Edith Erastoff) to safety, perhaps in that act redeeming his own life and the memories of his small family.
One could hardly describe this 1917 silent film as a true masterpiece, since the film itself speaks with great modesty despite its then extravagant budget of SEK 60,000. Yet in this film we can perceive the beginnings of the great Swedish film industry which would follow it. In a sense Sjöström’s success begat Alf Sjöberg, Ingmar Bergman, extending to Lasse Hallström, Ruben Östlund and others, as well as Scandinavian filmmaking in general.

Posted by greenintegerblog at 9:06 AM