a symphony of silence: true believers
by Douglas Messerli

Philip Gröning’s 2005 documentary film, Into Great Silence takes us for almost 3 hours into a world we might never have known and certainly would never have heard from: the Carthusian monks of the Grande Chartruse, who live under a vow of silence, dedicating their lives to prayer and music. If there seems to be a slight contradiction in this, where singing is central and speaking is restricted, that is, in a sense, what the film is really about. 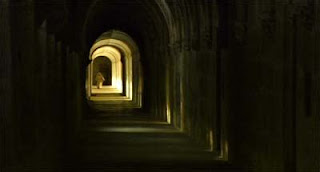 Gröning first asked the order for permission to film their activities in 1984, and it took the group 16 years to make their decision: he would be allowed if he alone did the filming and used real lighting. The result is quite remarkable.
As anyone who has read my several volumes of writing will know, I am not entirely sympathetic with formal religion. But in this film’s evidence of the brothers’ complete commitment to their beliefs and to their community—each taking on special tasks from gardening, farming, cooking, delivering meals, singing, bell-ringing, house cleaning, barbering, clock repair, and administration—that we cannot but marvel at their simple but beautiful lives high in the French Alps. 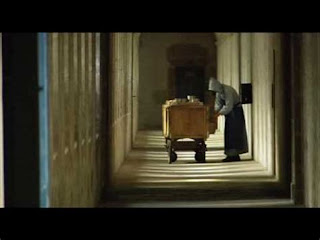 And then, despite its rather austere title (in German Die große Stille, “the great silence”), the film is anything but silent. Like a John Cage performance, the overwhelming noise of the order is front and center: the constant creak of the cart as its driver delivers the food, the footsteps of the brothers as they move along the gothic corridors, the hourly ringing of the bell, even the voice of the brother who feeds the cats (evidently the order allows verbal communication with animals)—all reveal that the rhythm of these monks’ lives is very much involved with noise. And then there is their endless epistolary activities that Gröning reveals through the piles of letters on the head-monk’s desk and through the daily mail that the individual monks receive.
Nature, through rains, the melting icicles of spring, and the heavy shovel of the gardener monk used in order to reclaim his summer gardens, the water streaming down the mountains, the numerous bird-calls, an occasional jet plane overhead (more silent than the nature around them), even their antiphonal crack of their knees as, one by one, these mostly elderly men bend to the floor in their communal meetings, all create a great commotion of sound. And then there are their occasional outings in the countryside where they are permitted to talk, discussing their habits of cleanliness in relation to other orders. The whiz of the electric razors which trim their hair…everything here creates a kind of avant-garde symphony, if one is only willing to listen.
And then there is their beautiful music, seemingly Gregorian-like chants sung in unison, so wonderfully sung and clearly so meaningful for their self-expression that one does, at moments, want to cry. These are their major verbal expressions, and we watch with awe as a young, apparently African novitiate attempts in his cell to learn them with a small key-board accompanied by his voice. It is clear he will ultimately bring this group more of what they so very much love. 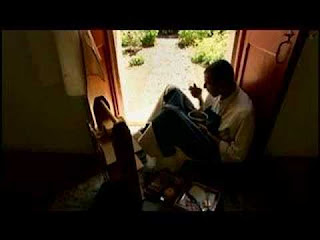 Finally, of course, there is the silence, the hours of deep prayer wherein they escape into an internal relationship with their God that none of us can truly imagine. Gröning, moreover, reveals them as individuals with his camera focusing on their various faces throughout the film, some of them looking a bit grim, others shyly smiling, all a bit uncomfortable with the camera before them, but perfectly willing to give themselves up to the intruding lens, just as they have to God.

It took me three days to actually watch this deeply intense movie. There is only so much silence I, a truly urban dweller, can bear. But each time I watched, I found myself opening the window to more carefully hear the sounds of the doves, the hummingbirds, and other natural beings who inhabit our condominium garden before, once more, turning on the endless patter of the news which I watch every day.
When I was in college singing in the Madison, Wisconsin Presbyterian church choir, someone in our midst arranged a trip to Chicago, where we met, for the afternoon, with members of a silent order in Chicago. They had broken their vow just for lunch and our afternoon visit. I recall how peaceful they all appeared, how delighted they were just to be able to explain their views of the world without at all attempting to convert us to their way of life. They simply demonstrated it without even attempting to evaluate their or our world. It was. Nothing more or less.
Watching Gröning’s film, I felt that same humility. These monks were not trying to sell us anything. They were what they were: true believers. Evidently, after seeing the director’s final cut, they were all happy with the result. The peace and loving of their lives was apparent even through the frame of the camera.