the lies we tell ourselves and others
by Douglas Messerli

On the surface Iranian director Asghar Farhadi’s 2009 film About Elly may, as many reviewers and critics have observed, seem to have relationships with the great Antonioni film L’Avventura; in this film, also involving a vacation trip to a seaside location (the Caspian sea, in this case, having replaced the warmer waters of the Mediterranean) during which suddenly, without explanation, a young woman suddenly goes missing. If these figures do not precisely parallel the more wealthy celebrants of the Antonioni film, they nonetheless do represent a upper-middle class of Teheran life. And, like the Italians of L’Avventura sexuality is certainly in the air—although in Farhadi’s film there is no suggestion of any actual sexual encounters; the men and women sleep in separate rooms, even though all but of two of the would-be partyers are already married and have children who accompany them on the trip. 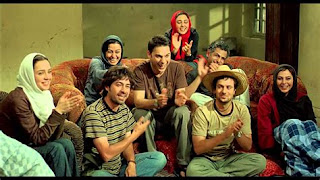 Yet the comparison with the ground-breaking art-house film also immediately breaks down after those few easy associations. For Farhadi’s film, as some critics have made clear, does not have roots so much in continental/international filmmaking, despite its highly artful direction, as it does with daily Iranian life. As Godfrey Cheshire has written, this director has no intention in his films of explaining Iran to Westerners, nor even pointing out the political difficulties of living in Iran—although he certainly does subtly point to them. No, this film is comfortable in its own milieu, just as are these young couples who have known each other for years, mostly through having gone to school together, feel at home with one another.
Indeed, at least in the beginning of the film, they speak so quickly in a Farsi argot that even with an excellent English translation it is often difficult to comprehend them. It’s not that they are so much different, but actually so much like modern young US, Mexican, European, and Canadian couples that renders them so slightly incomprehensible. Yes, the women all wear headscarves (a requirement in Iranian films) and, every once in a while, the men break down in male-on-male dances unthinkable in the West, but these contemporary citizens of Iran are almost painfully too much like us. The men immediately bond like those in so many American comedic bromances, and the women, at first, are shuffled off into another group to busily clean up the seaside apartment they have had to accept after being told that the villa they had paid for is due for a visit from its owner. Yet, husbands and wives, even allowing for the gender separations, behave much like most such group vacationers throughout the world, sometimes grousing about their assignments, but sharing in complex relationships that reveal their marital situations. This might almost have been a Hollywood-made movie demonstrating the joys and difficulties of friends recoupling in paradise such as the same year’s release Couples Retreat. 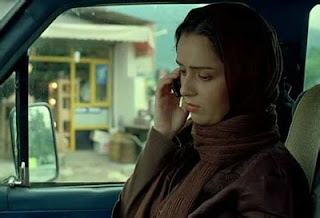 But beyond the first frames of this work, we already begin to perceive that here something is amiss in a kind of Hitchcockian way that will alter all of our expectations. First, there is the mix-up about the rooms they thought they had rented, and then the manager’s young son—who looks like a slightly menacing Pugsley right out of The Addams Family—sourly observes the group’s actions, even as he opens the gate to their more than filthy digs. With broken-out widows, they will surely be cold at night. And then there is the continuous roar of the sea which never lets up throughout the film.

More importantly, into their tightly-knit group they have mistakenly woven two outsiders: their former friend Ahmad (Shahab Hosseini), who has just returned from living in Germany after divorcing his German wife, and one of their daughter’s school-teacher Elly (Taraneh Alidoosti), whom Sepidah (Golshifteh Farahani) has invited along with the particular intention of hooking him up with Ahmad.

The beautiful Elly, attending to the children and shyly helping out in all the cleaning and cooking, is soon loved by all, and even the now unwedded Ahmad begins to warm up to her after the group intentionally sends them off on a car trip to pick up more supplies. Yet we can’t help but know something is wrong. In a cellphone call to her mother, Elly reassures the sickly woman that she shall be back by the next day, lying to her about where she is and contradicting the fact that the others have planned for a stay of a two days longer.

When Elly insists that she be driven into town so that she might return home by bus, the would-be matchmaker Sepidah hides Elly’s traveling bag and refuses to allow the trip, insisting she, herself, will pick up the new needed provisions alone, demanding that Elly watch the children bathing in the sea. 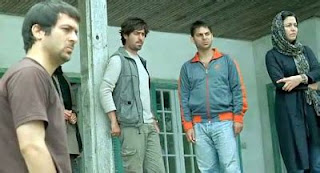 Somewhat like the more recent film Roma, the crashing waves seem to be swallowing up these children instead of allowing them to plash in their waves. And Farhadi brilliantly plays out what we might have imagined as two of the children run back to the volley-ball playing men to report that the young boy Arash has disappeared. Basically they ignore her until another child runs to them reporting the same information, sending them through a mad rush throughout the house before they realize Arash is lost a sea.
The long sequence in which they search for him, the camera roving back and forth over the landscape and waves before they finally find the boy, bringing him in and successfully resuscitating him, is an exciting piece of cinema that reveals Farhadi’s brilliance as a director.
But soon they discover another, maybe even more serious problem. Elly is also missing. Had she attempted to save the child and drowned? Had she simply abandoned the children to return to Teheran? Why is her bag missing? As Sepidah’s husband Amir (Mani Haghighi) begins to interrogate her, his wife reveals that she has hidden Elly’s bag, and that, in fact, Elly was engaged to another man, Alireza, and that she has pressured the young teacher to join them on their vacation trip nonetheless.
When the men call Alireza, who breathlessly arrives at their retreat, they explain what has happened, the fiancé grows violent, attacking Ahmad, and demands to talk to Sepidah. Encouraged by Amir to not tell the whole truth, she explains, much to his distress, that Elly went willingly with them.
Implicit, obviously, is the fact that in this male-dominated culture, her choice suggests she was willing to abandon her relationship with him. And, in this sense, the director is hinting, if of nothing else that the gender relationships available to his countrymen are very unfair and delimited.
Yet, given that knowledge, Sepidah’s actions and her final lie are even more detestable, and she is obviously renounced through her actions by her friends, even if Amir tenders forgiveness for her acts.
The final nail in her coffin comes when the police discover Ally’s body, which has suddenly washed up on a nearby shore. Called to the morgue by the police to identify his fiancée, Alireza breaks down, crying uncontrollably. Did Ally deliberately drown herself for her shame in having left him? Had she desired to leave him long ago? Was she, perhaps, attempting to save Arash? No answers are given. The movie doesn’t need them. What began as a loving domestic comedy has turned into a tragic outing that has forced them to all to realize the lies they have told to each other and themselves.