look what we’ve come through!
by Douglas Messerli

As my husband Howard argued yesterday, after we viewed Dexter Fletcher’s Rocketman: “Instead of describing the film as most critics have as a “musical fantasy,” I’d call it a “fantasia” on Elton John. A fantasia is a piece of music with no fixed form, or one consisting of tunes that many people know or recognize, which is precisely how this film reveals John's early years—his childhood as a boy unloved by either his aloof jazz-loving father or his selfish sexually-flitting mother, his early musical talents and his sudden rise to fame, his short-lived affair with his callous agent, and John's own out-of-control downward vortex into drugs, alcohol, and sex. The recent film Bohemian Rhapsody—a movie I very much liked—demonstrated Freddie Mercury’s difficulties with the first two (drugs and alcohol) but just barely incorporated his gay sexual experiences, almost hinting at his homosexuality, rather than actually depicting it. 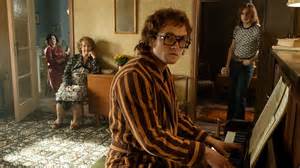 Rocketman takes the subject head-on, even portraying a couple of joyful gay sex scenes, in which John seems utterly open to its pleasures. But then, given John's public persona, his outrageously campy costumes, and his openly sybaritic life, perhaps Fletcher’s Baz Luhrmann-like film (as The New Yorker critic Anthony Lane argued) was inevitable and necessary. As John said when Walt Disney Studios asked that he and his husband tone down their film to allow it a PG-13 rating: “I did not live a PG-13 life style.”
What this does to the film in general, however, is to create a structure built on a retrospective of lived events and songs that work against the emotional experiences it attempts to portray. Yes, there are beautiful moments that truly bring tears to your eyes—the moment when visiting his recalcitrant father, now remarried and with two young children, Mr. Dwight gently picks up and hugs them, as John leaves, something he never did to his first born, Reggie (John's original name); his encounter with his is disgusting mother who claims that his birth caused her to lose her husband and, when he calls her to tell her that he is gay (necessary so he is told so that she might face the press about the issue), her only response is “I knew that hon” and “You will never be able to find love”; and, finally, when, stuffed with drugs and liquor, he attempts to commit suicide by diving into his swimming pool.
Perhaps the very most painful moment is when his very best friend and lyricist Bernie Taupin (Jaimie Bell) temporarily leaves him as John pleads for him to return. Yet, because of its flashback-like structure we know that things will quickly change—after all John is still performing (even if it’s a self-proclaimed final tour) and, as the movie announces just before the credits, he has now been sober for 38 years, found love with his husband David Furnish, and is raising two boys. Along with his great wealth, "who could ask for anything more?" Well, John clearly did, and so might we watching this biopic. 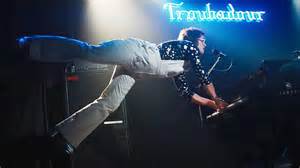 Fortunately, the infectious performances of the mostly singing cast, particularly Taron Egerton—who unlike Rami Malick in Bohemian Rhapsody does not lip-sync his songs—make this film a joy to behold. From the moment of John’s first big break-through at Los Angeles’ Troubadour night club, where the performer almost literally defied gravity while playing the piano and singing with rock singers such as Linda Ronstadt, Crosby, Stills & Nash (all three) and others in the attendance, anyone who loves music cannot help but enjoy the film, despite the narrative interruptions. Indeed with songs such as “Someone Saved My Life Tonight,” “Your Song,” and “Rocket Man,” who needs a back story? John’s music set to Taupin’s hot-house lyrics tells its own story of John’s desperate need for love and kindness, and his pained suffering for seldom being able to obtain either.
As he points out at one point in the movie, even his dearest friend abandoned him after John’s stunning Troubadour concert for a woman he picked up at Ma Cass’s party. It is clearly one thing to be celebrated on the stage, and quite another to be cared for at a party which he seems so desperately alone in the strange world of early 1970s Los Angeles. 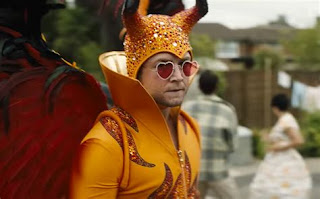 It is almost as if, having left the stage and when the lights have gone down, the man Elton John no longer existed, but returned to the unloved boy of his childhood. His handsome agent John Reid (Richard Madden), who temporarily lit up John’s life (the cliché is purposeful), basically used him as a money-making machine, having forced John into lifetime contracts and abusing him by demanding he perform impossibly large venues week after week. It is only when the needy boy still alive in this adult man can temporarily walk away from it all and seek psychological help that he can again move forward. As he tells to the institute counselor, he has probably tried every drug in existence, and, one might add, drunk every liquor available.

Strangely, for all this film’s honesty about his sexuality, it does not appear that John, unlike Mercury, had sex with every man he met, perhaps saving his life. Surely, he recognized this, working thoroughly with his AIDs charity. But it is clear from this film that the now 72-year old (my age as of last week) has had to battle hard to get where he now is, stumbling like most human beings, through an obviously conflicted life to get there. His story might almost be titled what D. H. Lawrence named his book of poems, Look What We’ve Come Through!

Posted by greenintegerblog at 11:42 AM