L'Assassin habite au 21, was Henri-Georges Clouzot’s first feature film, and the 4th movie he wrote for the Nazi-run studio Continental Films—a company created, in part, to replace banned American films. Fortunately, there are no obvious Nazi propagandistic elements in this work, and some critics have observed subtle satiric moments poking fun at the Germans. 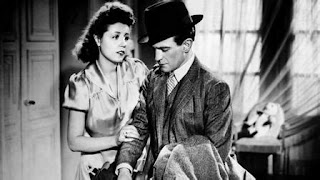 The subject here is murder described in a comic way that almost reminds one of The Thin Man series, particularly since its central characters, the police detective Wens (Pierre Fresnay) unintentionally teams up with his wife, the hilarious would-be opera singer, Mila Malou (Suzy Delair) to solve a series of city murders committed by a man or woman who leaves behind, with each killing, a card declaring it is the work of “Durand.”

The Mayor, the Chief of Police, and others are naturally frustrated that there seem to be utterly no clues as the identity of Durand, and demand the Wens solves the case within a few days or he will be without a job.
At a would-be opera tryout, the over-the-top Mila Malou—a woman who not only sings her songs a bit higher than they are written and who is more than a little neurotic—is told by the opera impresario that even if she were to sing well, he could not hire her because she has no “name.” 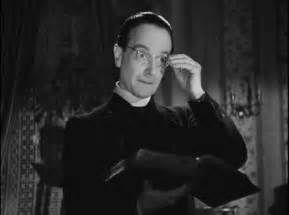 Determined to quickly become famous, Mila determines to outdo her husband by being the first to discover Durand’s whereabouts, but her actions, driving without lights, immediately land her in jail until Wens can show up to claim her as his wife.
Meanwhile, Wens gets a break when an ex-con, now gone straight and working as a second-hand furniture dealer, purposely gets arrested—through a hilariously put-down of a local policeman as he sits perched on a streetlight—so that he can tell Wens privately that he found newly printed cards in the drawer of a desk recently sold to him by someone living at a boarding house at 21 Avenue Junot.
Going in search to the murderer, Wens tells his wife he is traveling, leaving a sealed letter behind in case he doesn’t return.
He arrives at the boarding house dressed as a priest and there meets a cast of lunatics that might be at home in Arsenic and Old Lace: a bird-tweeting doorman and servant, a slightly dotty landlady, a man who makes dolls with no faces, an ex-soldier who spouts his detestation of mankind and who sees Durand as a kind of hero, a magician who sleeps in a coffin and keeps making things disappear, a would be lady-writer whose manuscripts are perpetually rejected, and blind ex-boxer and his nurse who appear to be having an affair. Each of them is strange and it seems that any one of them might be Durand. 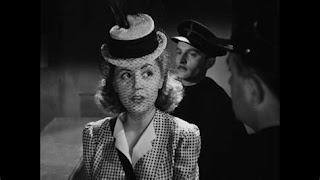 The fun of this film, a bit like Agatha Christie’s Ten Little Indians, lies in trying to outguess Wens and—when his wife unexpectedly shows up as a new guest in the house—Mila in determining which one is the murderer. Even Wens seems, once he has settled on the mean ex-soldier, mistaken. For although the arrested man finally admits to being Durand, police are faced with another murder with Durand’s calling card hanging from the corpse’s neck.
They arrest the dollmaker only to be served up with another body, and Wens goes on a chase to find the magician performing a new act, which still does not reveal his guilt. Indeed his life is now threatened as the 13th and perhaps final murder.
As anyone who has read my hundreds of reviews knows, I always reveal the entire plot, so if you’ve not seen the movie and want the joy of attempting to figure the murderer out for yourself, you should stop here. 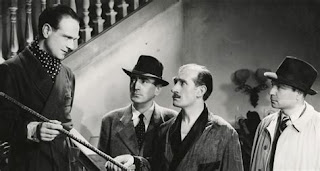 The revelation that Durand is not one person but all three of the men in the boarding house working in tandem might suggest that it takes an army, such as the German Nazis, to kill and rob so many people. In fact these three have been covering for one another all their lives, saving each other from school expulsion and other scrapes they encountered as children. In short, they grew in a culture of deceit that might even suggest the German nation. And in the end, after having captured Wens, they each claim the right to murder him.

Yet, this is after all a comedy, and at the last moment, the police, with Mila in the lead, rush into the warehouse where the three Durands have trapped the detective, in order to save his life. How they discovered his whereabouts is never quite explained. But it hardly matters, for Mila has saved her husband. Perhaps now she can have the baby she desires and, after performing so significantly to the boarding house audience, give up her musical aspirations.
This charming who-done-it is a strange offering from a Nazi film company given that it so imitates British and American cinema.

Posted by greenintegerblog at 8:53 AM