a shot in the dark
by Douglas Messerli

Chinese Roulette is now the 28th film by Rainer Werner Fassbinder I have reviewed, and I have loved them all—perhaps with the exception of his last film Qurelle, which I still found fascinating and beautiful. Even my beloved Hitchcock can’t match that. Yet when the movie first appeared in 1976 and 1977, many otherwise intelligent critics, including the admirable Dave Kehr, disparaged it as too intellectual and being disinterested in character. 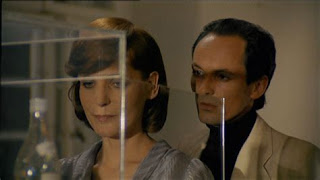 Watching this yesterday, I felt as I seeing one of his very best works, almost as satirically dark as Satan’s Brew and having as much to say about German-international culture as works such as Katzelmacher and Ali: Fear Eats the Soul. Unlike the last two mentioned films, this work does not represent individuals from other countries, but given the “outsiderness” of the family daughter, Angela (Andrea Schober), crippled from a childhood illness, and her nanny Traunitz (Macha Méril), who is mute, and the fact that for the first time Fassbinder worked with two French actors, Méril and the great Godard figure Anna Karina, the film speaks of the tensions between traditional German culture and those who do not seem to quite fit into those confines. 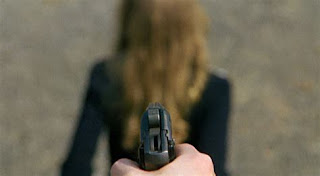 Indeed, in this film there are many references to the German Third Reich. Fassbinder even hints, without making it a major issue, that a friend who has recently been killed, the owner of the country manor in which the film’s events take place, Gerhard Christ (Alexander Allerson) and his quite dastardly housekeeper Kast (Brigitte Mira) have a shadowy past that they are hiding. (I might add, as an aside, that I even had a dream about that trio, one of whom we never meet, last night).

If nothing else, family life at the Christ’s household is anything but Christ-like as both husband and wife begin the film by lying to each other, Gerhard insisting that he must travel to Oslo, and his wife Ariane (Margit Carstensen) responding that she must travel to Milan for her job.
In fact, this couple both plan to escape to their slightly decaying but very grand country estate to have trysts with their lovers, Gerhard with Irene Cartis (Anna Karina) and Ariane with her husband’s assistant Kolbe (Ulli Lommel). Gerhard and Irene spend the first few moments in the nearby woods and gardens in one of Fassbinder’s most beautifully filmed scenes of nature—and throughout this film the director spends a great deal of time revealing the beauties of nature, quite atypical except for his black-and-white masterwork, Effi Briest—before entering the mansion where they discover Kolbe and Ariane on the floor in the midst of sex.
After a moment of horror, and Irene’s attempt to escape the situation, they all break into laughter at the ridiculousness of the event. Yet the evening dinner, cooked up by the complaining but reliable Kast, is clearly not something to be enjoyed by the two “intruders,” and is even made even more unbearable by the fact that Ariane and Gerhard spend much of the table talk recounting their adventures together throughout the world. It is almost torturous conversation that any sane couple would have avoided simply out of empathy for their lovers. 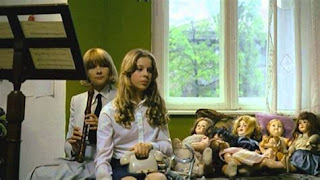 And Fassbinder, as critic Ed Gonzalez observes, films these figures with a camera that “moves constantly in all directions as if attached to a system of pulleys. He follows characters as they walk, stop, shift alliances, and subsequently fractures his frame using the reflective devices that clutter the film’s mise-en-scène.” Fassbinder does not attempt to analyze his characters as much as he is determined to use them as soulless dolls—much like the several grotesque dolls their Christ’s daughter later brings to the party—constantly pushing against and pulling apart from each other.
I haven’t yet mentioned Kast’s dunderhead of a son, Gabriel (Volker Spengler), a kind of blond-haired angel that might only have been dreamed up by Dante. A man of indeterminant sex, he even admits to an obviously desirous filling-station attendant, that like Lucifer, he lives in hell, existing in a kind of androgynous life that can’t allow him any pleasure. He is a voyeur, possibly even a would-be child abuser (Angela invites him into her room every time she visits the man), but mostly he is a slave to the manor, busily running errands and shining shoes, when what he really desires is to become a great writer. 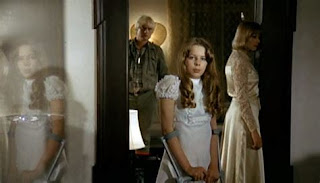 Yet these are all terribly guilty people—guilty of lying, sexual infidelity, and clearly much more. And it takes the horrifyingly truth-telling daughter, Angela, a trunk load of dolls intact, to reveal their corruptness. Insisting that the Kasts join them at the dinner table the next night, she suggests that they all play a game of Chinese Roulette, an “entertainment” in which one team asks questions and the other must reply, which often reveals their own and other’s faults without actually naming them. With her and Traunitz in control the others have no possibility but to destroy each other by insinuation.
We already suspect that her own memory is flawed, that she sees her illness and her parent’s inability to accept it as the cause of their lies and infidelities which she has scornfully observed for years. But Kast utterly denies this. And it is apparent that her young imagination also is something grown out of perversity. In one amazing scene to which Gabriel opens the door, Angela’s nanny Traunitz is quietly dancing while embracing her charge’s crutches. In short, everything in this upside-down world is open to question.
Ariane, Angela’s mother, has long ago revealed her hostility to her daughter—at one earlier point even aiming a pistol at her through a window—and as the Chinese Roulette game progresses, so too does she become more and more agitated. The final question brings all the film’s issues together into one: "What would this person have been in the Third Reich?"
Many of the questioners imagine the question aimed at Kast, but Angela, in agreement with the hand-signing of her nanny, point to Ariane as a concentration camp commander. As if to prove them right, the mother takes up her husband’s pistol pointing it for a moment at her daughter before shooting Traunitz.
While others call for an ambulance, Gerhard once more reveals his talent for self-preservation by calling his lawyer: “My wife has done a rather stupid thing….”
Taunitz, we are told, will survive. The bullet has only grazed her forehead.
Yet the vengeful daughter is not finished: meeting Gabriel on the staircase she tells him that she knows that every word of his would-be masterwork has been plagiarized.
It would be hard to imagine a more spiteful child unless George and Martha’s son in Edward Albee’s Who’s Afraid of Virginia Woolf? really had existed. But, as we know, he did, and expressed that spite in the form of writing a kind of horror play about the parents who had adopted him. To me it’s possible that the film exists as a kind of template for this film.
As Fassbinder’s camera slowly pulls out from house of horrors, we hear yet another shot coming out of the dark environs of that building. The movie ends without any answers.
Of course, it could have meant the death of any one of those within. God knows, they all have enough guilt on their minds. But I suggest it ultimately boils down to just three obvious candidates: the suffering child Angela who has negotiated this terrible night or Ariane who has demonstrated her own special propensity to be actually a concentration camp commander. Yet these are the two most traditional of possibilities, and both are strong monsters who have learned from hate how to survive.
I’d argue for Gabriel, shamed for his unoriginality, his lack of imagination which he so desperately desires in order to escape from the dark pit in which he exists. And he, also the messenger—a symbol of the director himself, who has woven this terrible tale of societal entanglement—finally brings the film to a stop.