Today, particularly in the US, it is almost unimaginable that a silent 1913 film might have helped to change political values, in this case regarding the “poorhouse laws.” Even Dickens’ novels of the previous century didn’t quite have those effects. Yet Victor Sjöström’s moving melodrama, Ingeborg Holm, based on a 1906 play by Nils Krok, created a debate in the generally concerned society of Sweden that led to real changes in laws.
As well it should have. For in this work, noted for its narrative power in an era when films generally featured moments of comic or tragic expression, relates the story quite flawlessly of a rather happy family with a well-balanced husband and wife (Hilda Borgström as Ingeborg) who have three lovely children, two boys and a young daughter. The film begins accordingly in a kind of natural paradise, an allotment garden where the family is raising fresh vegetables, presumably to sell and increase their modest income or simply to help lower their grocery expenses. 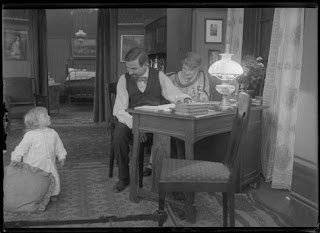 Indeed, we soon discover that Ingeborg’s husband has his own aspirations to become a small grocer, someone being able out of his modest income, to save 4,000 Kroner (an amazing sum in those days) which helps him to obtain a much larger loan to begin his new enterprise.
It appears that this hard-working and clearly loving family is completely blessed. Although Ingeborg obviously has a few doubts about taking on such a debt, she also knows that this new venture represents a future for her family that can make all the difference in their lives.
From the beginning, however, Sjöström hints that there are darker possibilities, as we see the husband, at one point, slightly cough and put his hand to his chest. In another instance, when Ingeborg leaves the room to put her youngest boy to bed, we perceive by his gestures that he is truly in pain.
Nonetheless, their grocery shop proceeds, each of them taking turns with a young assistant in serving their customers. What neither of them knows is that their employee (Erik Lindholm) is passing on free produce and grocery stocks to any young woman who enters their domain, while rudely ignoring the shop’s older customers, acts that will later haunt the family, particularly when the father finally succumbs to tuberculosis, and Ingeborg is left with the shop and its debts. 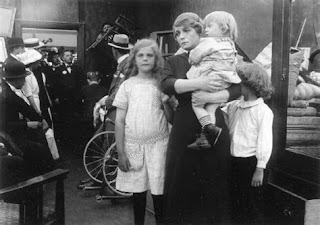 Told that she must now come up with an immediate payment, she is shocked to perceive that, despite reasonable sales, she is destitute. She writes the authorities, unable to explain her bankruptcy. Although she is allowed an opportunity to plead her case before governmental figures, her case is denied, and she and her children are sentenced to the workhouse—little more than a prison in which those sentenced to it must daily scrub and clean the place to pay the society which has helped to destroy their lives.
To protect her children from such a life, Ingeborg allows her boys and daughter to be adopted, now losing hold of the last ties to everything she once loved.
Most of the foster parents seem to be good folk, promising to protect each of her children; but for a mother who has deeply loved them, it is no solace. And when she discovers, through a mislaid letter by the villainous poorhouse Superintendent (Georg Grönroos) that her daughter Valborg is ill, she escapes her confines to go in search of her sick daughter, the police following her, determined to bring her back.
The daughter is peacefully asleep and being well-cared for; but when she seeks out her young son in a neighboring community, he no longer recognizes her and rejects her loving hugs.
Moreover, the police at now at the door of the adoptive parent’s home. Fortunately, the foster parents are kind people who quickly scuttle her off to the basement hold, the wife entertaining the policemen while the husband helps Ingeborg to escape.
It is no use, however, for the police soon capture her, returning her to the workhouse, whose authorities now want to charge her to even more slave labor in order to pay for their efforts to track her down. 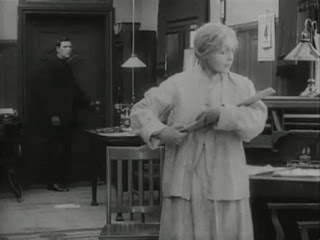 How can one even endure these events? Ingeborg, who has tried to entertain her baby son by quickly creating a cloth doll, now carries with her a wooden doll perceiving it as her lost baby. She is now incarcerated in the mentally-disturbed section of her prison.
Watching this work, I kept being reminded of another poor Scandinavian family, the Norwegian Hansen family living in San Francisco. This family also has little money, the father out of work, and the mother of several children, the Mama of the film’s title, pretending she has a bank account to help her family live in an environment without fear of poverty. Yet everything in I Remember Mama seems to go right for them. Even the necessary euthanasia of the youngest child’s cat turns into a kind of miracle, as the cat survives. So does this harried family, all through the endless love of their mother and the writing talents of the eldest daughter, gracefully survive, which gives credence to the mother’s endless reserves of love. Like Ingeborg, she too has scrubbed floors in order to keep her promise to her ill daughter in a hospital.
Ingeborg Holm is this family in reverse, a mother just as loving, losing everything including her sanity, as the society refuses to embrace and protect her.
A bit like I Remember Mama, it is the child who saves the mother, as her eldest son, now a sailor, returns home to visit his mother and, through a photograph she is included his luggage which she packed for his childhood departure, now reveals who she is—or, at least, who she was. She returns to herself, becomes Ingeborg once more. But we can only ask “for what purpose?” Her entire life has been stolen from her. Yes, the adult Erik Holm (Aron Lindgren) has come home, but the woman he now encounters is a forlorn shipwrecked being, having just barely escaped drowning.