nobody knows anything
by Douglas Messerli

Iranian filmmaker Asghar Farhadi’s most recent film, Everybody Knows, begins a bit like Robert Altman’s Gosford Park, with so many family members and guests arriving simultaneously at a location that it is nearly impossible for the viewer to sort them out. In fact, in both cases, that is the purposeful effect. Like unknowing guests we arrive on the scene in which everyone else seems to know “everything,” and we are blinded almost through the first third of this beautifully-filmed work by our imperceptions. Perhaps that initial sense of confusion caused critics at the Cannes Film Festival and upon the American release in 2019, to keep their distance from this Farhadi masterwork, or perhaps it was simply fact that the arthouse director, in this case, was working in a language not his own, within a far popular genre, a thriller-mystery.
The reviews seemed generally polite, but to my way of thinking, did not do justice to this complexly stimulating work. 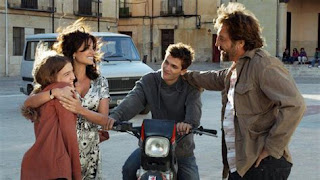 Those early scenes are obviously overwhelming. Who are all these people? And why are they gathering with their wives, husbands, and children in this small Madrid suburban town? We soon recognize that Laura (Penélope Cruz) has traveled the furthest, without her husband, but with her two children, Irene (Carla Campra), and the younger son Diego (Iván Chavero), from Argentina, evidentially the for one of the first times since she left the small community with her husband Alejandro (Ricardo Darín).
We soon recognize Laura’s sisters Mariana (Elvira Mínguez)—who reveals that she and her husband are in the process of divorce—and her younger sister, Ana (Inma Cuesta) who is about to marry Joan (Roger Casamajor). And we are just a quickly introduced to the father of this clan, the widowed and stubbornly independent-minded Antonio (Ramón Barea), so advanced in age that we might almost imagine this could become a kind comic work about dying. Altman might have turned it into that.

It’s not. At least not literally. The family is, in fact, not the real focus of this work, although they certainly capture the majority of the frames early on. For the real relationships in this work exist not in the present, with the marriage of Ana and Joan, but in the past and in the future, the last of which quickly slaps this film into motion as the carefree teenager Irene suddenly encounters a young local boy, Felipe (Sergio Castellanos), with who, almost as suddenly as they arrive, she goes on a wild motorcycle ride through country roads, she at the helm. We almost perceive immediately that the film is truly about her and fears for the dangers which she may encounter.

Yet Farhadi, as always, is a sly story-teller, slowly enveloping the entire community into this tale about love past and present. As the young couple wind their way up the staircase of the local church—naughtily opting out of the wedding of the couple just below—Irene discovers that the walls of the past contain the legendary loves of the time, mostly just with the initials Americans might have carved in the roots of trees. One of them reveals an L and a P, which Felipe reveals stands for Laura and a now-local wine grower, Paco (Javier Bardem), who is his uncle. Suddenly, we perceive that the interwoven texture of those early scenes represent the entire natural image of this community, each vine inter-weaving with the others, sustaining and choking out the past those vines represent.

I read a recent article about how trees interconnect with one another through their roots: and this is a literal rendering of that. These individuals all know each other far too well, and far better than any outsider might ever be able to. We, the audience, are simply the visitors to the wedding and its after-events, far too slow to comprehend the love, bitterness, and hate that the village itself has nourished. As Paco tells his workers very early in the film, you have to keep the newly picked grapes away from the others if you intend to create a great wine. 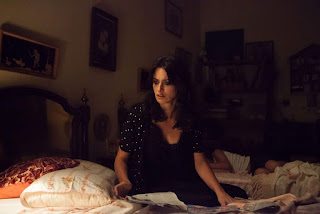 But we know, even as outsiders, that the problem is that in such a community the past can never separated from the present. When Laura’s daughter Irene suddenly goes missing, the kidnapper(s) leave a terrible message in the form of newspaper clippings from another past kidnapping, in which evidently the young girl had been killed. The kidnappers reassure her that if she goes to the police, Irene too will be murdered.
By now, of course, we have entered the domain of Alfred Hitchcock, and the desperation of family members, all of whom have their own theories, reaches to the heights of The Man Who Knew Too Much—except in this film everybody knows too much, or, at least, think they do. For a more reasoned logic, Laura must turn to her youthful lover, Paco, who advises her to pretend that she is attempting to raise the money the kidnappers demand—despite the fact, she is forced to admit, despite the village perceptions, her husband and she have no money, he having been unemployed for the past two years?
Like an onion being pealed, bit by bit, we discover what even we’re not sure are truths. Is Irene actually Paco’s child, as Laura ultimately claims. Did she sell the estate which Paco has turned into a profitable enterprise at an enormous loss, simply to escape the town or the need to run on with her current lover? And why are the kidnappers now sending messages to Paco’s wife, Bea (Bárbara Lennie) as well?
When she finally summons her husband, Alejandro, to return, he too seems almost like a suspect, although an unwitting and rather naïve version of such a figure.
Although “everybody knows everything” in this community no one seems to know anything really. Was it someone close to the family, a group of angry workers from Paco’s fields, even Paco himself—particularly if he knew of the paternity of Irene? These are the questions the film keeps demanding that we consider.
Perhaps simply out of guilt or playing bluff, Paco offers his estate for sale, never imagining, one must presume, that such a sale would have to take place in order to bring back Irene.
The truth, in this world, is almost too difficult to reveal, and, as Farhadi himself has suggested, the real truths, despite what we finally hear, exist out of the film’s frame. Did Laura herself arrange for the kidnapping in order to punish her childhood lover, to find money in order to survive with her current husband? You need to see the movie and make your own conclusions. Yet however you might interpret it, there are no longer any easy answers.
Nobody knows truly what made these figures act the way they did. Perhaps not even them. The film ends with Laura gently unwrapping Irene’s legs and bringing her back into family love. We can only suspect that, in fact, she has introduced her into another generation of secrets of love and hate.


Posted by greenintegerblog at 9:20 AM