the blackmailer’s charter
by Douglas Messerli

Through a half-intentional coincidence I spent the weekend of international LGBTQ pride marches watching Basil Dearden’s 1961 film Victim, one of the first English-language films to actually deal with homosexuality head on. Yes, The Children’s Hour—based on Lillian Hellman’s 1934 play—was released in the very same year as Dearden’s, a film hinting, winking, and nodding to a possible lesbian relationship. A couple of years before Tennessee William’s Suddenly, Last Summer played with gay child abuse and cannibalism. And in the following year, the US film Advise and Consent lamely dealt with some of the same issues. As I have shown, moreover, there have many dozens of smaller and larger films that hover around the issues, some of them rather joyfully embracing their would-be/maybe gay and lesbian figures. 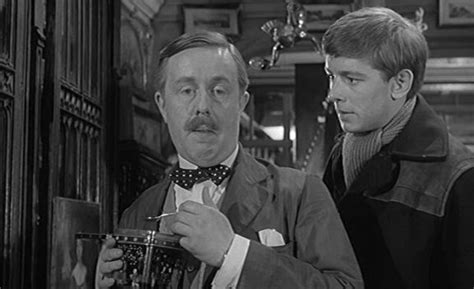 But Victim actually confronts it, and with a fairly open-minded head detective who, despite the British laws which declared homosexuality a criminal act, nonetheless seems to want to help save the many gay men who—fearing for their careers, their closeted marriages, and their terror of imprisonment—must suffer what he describes as “the blackmailer’s charter.” His assistant represents the popular view of gays as disgusting beings who all need to be rounded-up and arrested.
The film begins not with the central character, barrister Melville Farr (Dirk Bogarde)—the character’s name alone calling up the gay American author and a sense of his distance from the society in which the barrister is now safely entrenched—but with a much younger working man, Jack “Boy” Barrett (Peter EcEnery), who upon seeing the police arrive at a construction site in which he is working, bolts, calling a friend to immediately remove a package from the back of his closet. That package evidently contains a scrapbook with articles and pictures not only of Farr, but several other respectable businessmen, a barber, a bookseller, a noted actor and others, with whom he has consorted over the years. 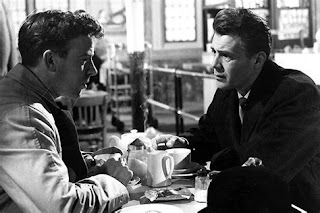 If “consorted” seems a very archaic word-choice, it’s perfect here, for the picture with Farr shows them simply in a car, the lawyer’s hand around Boy, who is in tears (a photo, incidentally, that we never actually see, despite testimony of several reviewers that do see it). Evidently the husband and wife writers of this film want us to believe that Farr himself, once a gay man whose university lover (again in a non-special relationship) committed suicide, has since lived in a solid heterosexual relationship with his beloved wife, Laura (Sylvia Syms) without sexually going astray.

Obviously, even a third-grader could read the authorial lie. As Farr later tells his wife, he feared in his “friendship” with Boy that he was almost ready to go “too far” and “wanted him.” Accordingly, when Boy calls him several times, attempting to warn Farr of the police raid, he becomes convinced that his young “would-be” love is himself trying to blackmail him and refuses to answer. We can presume that something similar must have happened with his early male lover. For now Farr is highly successful barrister, possibly about to be appointed as the Queen’s Counsel. 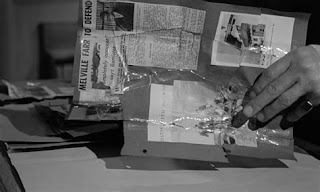 Boy attempts to escape to the nearby countryside, only to again encounter the police and be arrested. Even though the police chief attempts to explain that he should explain his activities so that they might find the blackmailer—Boy has stolen £2,300 from his current employer—the young man keeps silent, as do most of the figures of this ultimately tragic work of suspense. The barber, also faced with blackmail sells his business in order to move away, but when approached by mobsters suffers a heart-attack and dies. So Boy, like so many gay men of the day, feels trapped. Sooner or later, he recognizes, the police will shake the truth out of him, and not only might he be imprisoned but many of his previous companions will be taken down as well. He, like Farr’s early lover, hangs himself.

The film might timidly have moved on from here in the manner of Evelyn Waugh’s Brideshead Revisited or as the early lover of the title character of E. M. Forester’s Maurice did, enwrapping its characters into hidden married existences. Farr might have faded back into his closeted life, protecting his career and the domestic placidity of his home life. But it is precisely here that Dearden’s film grows brave, as Farr determines to track down the blackmailers on his own, involving one of Boy’s friends (apparently a heterosexual), as he follows down every clue. 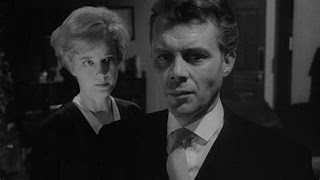 Meanwhile, his wife realizes that the call she has intercepted from Boy Barrett to her husband is the same figure which the newspapers have now reported as being dead. She confronts her husband who quite honestly explains the situation (a scene, apparently, written by Bogarde himself), of which she is not convinced, determining that he has gone back on his commitment to a heterosexual life. Despite the fact that he now recognizes he may lose her and all public standing, he nonetheless moves forward, eventually with some police help revealing the blackmailers: I’ll save those details from future viewers, despite my usual propensity to reveal all the plot. It really doesn’t matter, since in those days, apparently, there were hundreds of such figures lurking behind homosexuals, looking for a way to bring in income. And, yes, the word homosexual is actually used in this film. And scrawled across Farr’s garage door is an ugly reminder of the times: FARR IS QUEER. 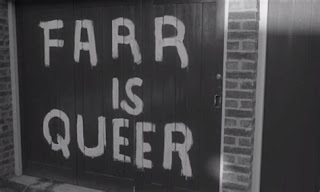 Who cares, really, if Farr, encouraging his wife to leave so that she will not be involved with what will surely be an ugly court case, is later reunited with her. He, unlike so many before him, has been honest, admitted a love that was not supposed to have been named. And despite this film’s timidity, in hindsight it proves to be quite brave, facing a storm of protest the British and US censors at the time—as well as homophobic critics.

For once, I totally agree with Pauline Kael’s comments:

The hero of the film is a man who has never given way to his homosexual impulses; he has fought them–that's part of his heroism. Maybe that's why he seems such a stuffy stock figure of a hero... The dreadful irony involved is that Dirk Bogarde looks so pained, so anguished from the self-sacrifice of repressing his homosexuality that the film seems to give rather a black eye to heterosexual life.

After several actors (including James Mason and Stewart Granger) turned down the role, Bogarde, who was living with his business manager Anthony Forwood, suggests he may have made one the “wisest” decisions of his life, allowing him to abandon the pretty boys of the matinee idol and comic roles to which he had previously been assigned. He went on to play in Pinter and De Sica films as a conflicted, often gay- oriented figure which demonstrated his true acting abilities.


Posted by greenintegerblog at 10:53 AM