Christopher Münch | The Hours and Times

Christopher Münch's 1991 black-and-white film about a weekend vacation to Barcelona with John Lennon and The Beatles’ manager Brian Epstein is, like the other two “The Beatles without Beatles’”
I review, a fantasy. Yet this one has a special poignancy, because it truly might have happened even in a slightly different form. 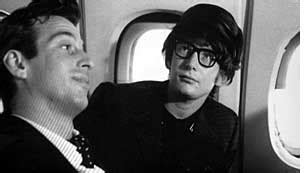 Epstein (David Angus), a sophisticated, culturally acclimated gay man traveled with the gum-chewing Liverpoolean Lennon (Ian Hart) to Spain in 1963 for a few days, presumably to allow Lennon to get some rest and, just maybe, become a bit more worldly, since together, and least in this telling, they did visit several Gaudi buildings, museums, and films.

In The Hours and Times the director toys with the possibility that the street-smart singer might have been somewhat curious, despite his own heterosexual marriage to Cynthia, about gay life. It wouldn’t be the first time that heterosexual men have toyed with and even explored the LGBTQ world. And Münch presents Lennon as a highly intelligent, if a bit course and uneducated man, who’s a tart wit, at times, and is most certainly curious about the world around him, even if he expresses utterly no interest in seeing Barcelona; for him it could have been any city in any country.
The fact that he trailed along after the ascot-wearing Epstein into strange territory is highly intriguing, and Münch subtly steers his queer-friendly film around the possibilities, while makes no claim to suggest that anything sexual between the two ever occurred.
In fact that is precisely what makes this such an insightful work. The director saw it as a kind of exercise in thought, never expecting that such a movie would get any distribution or even receive permission to be shown. Rather amazingly, it won the Special Jury Recognition award at the 1992 Sundance Film Festival.
During the flight to Barcelona Lennon flirts with a more-than-attentive stewardess, Marianne (Stephanie Pack) inviting her—despite Epstein’s discouragement—to visit him in his hotel when she returns to Barcelona two days later. After all, Lennon proclaims to his knowing management, you have to give me “allowances,” to which Epstein grumbles that is always what he always does.
Yet when the two travelers actually do reach their hotel destination, Lennon brings up the subject of gay sex—Epstein’s sexuality being a open secret— suggesting that he sometimes thinks about trying gay sex but imagines it would be too painful. 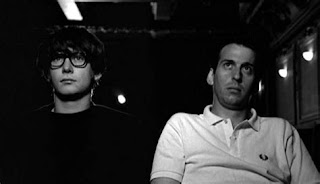 To diffuse the tension, Epstein suggests they play cards, and Lennon returns to his own room alone, receiving a call from his wife, whom he appears to treat quite badly despite her insistence that she misses him. Lennon seems to miss only his son, Julian, and hangs mid-sentence.
The next day Lennon actually suggests that Epstein take him to a gay bar. The bar, more a “gentleman’s club” than what we might today describe as a gay bar, is almost empty at the hour, except for Quinones (Robin McDonald), a gay man who is married, a fact which Lennon finds intriguing. Quinones, clearly interested in Lennon, takes them back to his hotel room, but they soon leave, Epstein furious with Lennon’s flirtation, describing the man as a fascist and an anti-Semite, subtly apparent in the stranger’s questions and demeanor.
Frustrated, Epstein goes to bed, but not before casually asking the hotel boy Miguel if he might perform oral sex. But when the boy queries him, Epstein proclaims he was just joking. Like Lennon, he receives a call from a domineering woman: his mother.
During a tour through the city, Epstein encourages his protégé to speak about his relationship with Cynthia, but it is clear that Lennon is uncomfortable discussing such things. 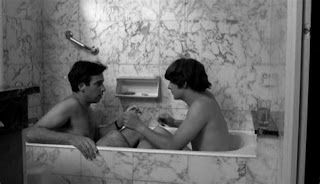 Returning to their rooms, Lennon is determined to take a bath while playing his harmonica. The manager enters the room, sitting on the edge of the tub before the musician asks him to scrub his back. As Epstein does so, Lennon unexpectedly begins to kiss him, and Epstein, totally encouraged by event, undresses and joins the Beatle performer in the tub. The kiss continues for a few moments before Lennon stands up and bolts.

Lennon is what we call in the gay world a “come on,” a flirtatious being who will not/cannot carry through—the most frustrating of all people. Yet Lennon takes this even further, receiving a phone call from the returned Marianne, whom Lennon immediately invites up to his room, leaving Epstein to suffer alone again in bed.
Yet even Marianne, amazingly intelligent and spunky, does not necessarily offer herself up to an easy “rape,” making that possibility political: “Our country rapes another country.” She also describes the musician as tormenting his manager.
Yet she has brought a present for Lennon, a Little Richard record, a singer who Epstein had asked to lead for a Beatles’ concert the year before these events. Given Little Richard’s effeminate exaggerations, his choice of wearing make-up and other feminine clothing, and his fascination with voyeurism, it is another subtle reminder to Lennon that his macho behavior may not get him very far in this world. His evening with Marianne ends with a quiet dance to that record.
The following day the singer and his manager turn the discussion to Epstein’s own life, who explains he was sent by his mother to Barcelona as a young man after he’d been robbed and blackmailed by a man he’d encountered in sex. And here the film seems to shift slightly as Epstein almost appears to ask for a date—even if it’s far into the future, 10 years from now, “no matter what you are doing.” Lennon agrees to thank about it. It’s a little bit like the top of the Empire Building date in An Affair to Remember, and this fictitious Epstein even seems to hint of it when he later takes Lennon to his favorite roof-top place, revealing that he has loved their time together. 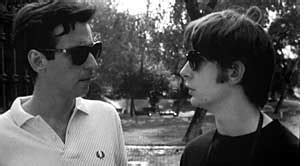 In the very next scene we see Lennon sleeping next to him in bed. Münch is not so much suggesting that the two have sexually “come together” so to speak, but that they have come to a kind of arrangement, a comprehension of their differences and desires. It is strange that, as they plan, on their final day to attend a bull fight, it is Epstein who is worried about whether or not Lennon might be too squeamish to watch, suggesting perhaps that the gentle soul here is Lennon not Epstein, who is a hearty man experienced in the pleasures and terrors of the universe.
The above might simply sound like a recounting of the plot. But this film is about its details, in the negotiations such different people, who still admired and loved one another, make with one another in order to get on. And it is almost a study in the torments of the sexual frames we put around ourselves and each other. In this case, both were seeking a kind of fluidity, even if they might never find it.
Accordingly of the three fantasias on which I focus—The Hours and Times, Across the Universe, and Yesterday—this film is perhaps most honest, and the closest the The Beatles’ real world, however unknowable and insane that might have been.


Posted by greenintegerblog at 9:03 AM