an existential cry about the forgotten
by Douglas Messerli

Richard Curtis (screenplay, based on a story by Curtis and Jack Barth), Danny Boyle (director) Yesterday / 2019

Of the three Beatles movies of which I write, the most recent, Danny Boyle’s Yesterday is certainly the most fantastical. In a sense Boyle’s film, with a script by noted screenwriter Richard Curtis (Four Weddings and a Funeral and Notting Hill). As The New Yorker critic Anthony Lane argued, Curtis’ film writing has always been about the possibility of people who love and need each other not “coming together,” or coming together too late for their effective collaboration to make sense.

In Yesterday, the coming together did actually happen, but is inexplicably wiped away (along with a few other events, the Harry Potter books, for example) in a twelve-second global blackout, during which our unlikely hero, Jack Malick (Himesh Patel), whose bike is hit by a bus and is sent hurtling through the air.
Up until this moment Jack has been a mediocre Suffolk musician whose concerts are attended primarily by a straggling group of four or so friends. Even desite his manager's love of him and support, he is convinced his career is ended.  His guitar-based compositions just don’t have the magic necessary to allow him a career. “It would take a miracle,” for his dreams to become reality, he declares.
But waking up in a hospital bed results in just such a miracle, particularly when he discovers that no one around him any longer remembers the Beatles. A Google search results in nothing but pictures and information on bugs. The songs of the fab four no longer exist and no one on earth, apparently, has ever heard them. 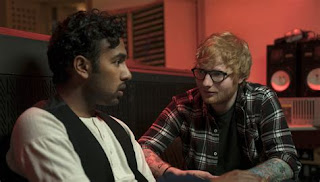 Jack urgently attempts to put their songs back together, recalling the Beatles’ music, sometimes with great difficulty—his parents and family friends, for example, keep interrupting his piano rendition of “Let It Be,” suggesting that he change the title to “Leave It Be”; at a later point record executives suggest he change the song “Hey Jude” to “Hey Dude”—as resurrects their repertoire and begins to performs it with great success. They are after all, amazing songs—and to give him his due Patel, performs them quite brilliantly.
Indeed the casting of a Britisher whose parents were of south Indian origin (his mother lived for a while in Zambia and his father in Kenya), is perhaps the most brilliant aspect of this film. You don’t have to go across the universe to appreciate the Beatles, their songs breathe everywhere they exist. And Patel’s renditions of “Yesterday” and “Back in the U.S.S.R” are among the best. But the very audacity of this kind of everyday man becoming the sole repository of the Beatles’ albums is more than a little touching. No mop-headed boy/man is often scruffy-bearded Jack.
As Malick becomes popular he is soon approached by the noted singer Ed Sheeran (playing a fictional version of himself) who invites him to be the opening act at one of his concerts. 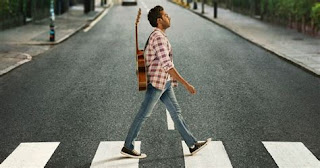 Curtis’ films are all about impossible dreams come true, so you know that Malick will soon become famous and be tempted by fame and big money, in this case by the absolutely brilliantly acted wicked-witch of an agent (“You make the money and we take most of it”), Debra Hammer (Kate McKinnon), whose entire face reveals her every evil fancy that crosses her empty mind.

All this is great fun, that is until Malick is trailed by two others who somehow also survived the “blackout” and know that he is a plagiarist. They explain that they don’t care as long as he continues to keep the Beatles’ music alive. They even pass on a secret address, which Malick visits, encountering a totally happy John Lennon, who, with his wife, makes art (shades of what might have been his life with Yuko Ono had he not been tracked down near the Dakota by his murderer Mark David Chapman).
Yet Malick is also is being tracked down by his own conscience and is being trailed by his ex-manager girlfriend, who needs to know just how committed he is to the money and the fame he has already achieved.
Patel’s rendition of the Beatles’ song “Help” in the midst of this crisis is so intense and poignant that I heard that pop tune in a new way for the first time in my life. The Beatles sang it as a kind lark, a staged trauma that one might imagine them feeling, surrounded by their thousands of girl-admirers and their endless commitments. For Malick it becomes an existential statement:

Help me if you can, I’m feeling down
And I do appreciate you being ’round
Help me get my feet back on the ground
Won’t you please, please help me?

In his singing, this is a truly angst-driven song, a desperate plea for someway out of the world in which his has found himself and cannot easily escape without destroying his own life, those of others, and the lovely music he has brought back into being.
I almost wish the movie could have ended there, in a complete lack of resolution. Once you tell so many lies, perhaps there is no way out. And it would have represented a brave statement of irresolution that most movies are missing these days.
But Boyle’s film is also a fantasy. And Malick, shocking everyone, admits his plagiarism and returns to the love of his life in a literal rather than metaphorical (as in Across the Universe) rendition of the ditty “Ob-La-Di, Ob-La-Da,” life, apparently, just going on.

Posted by greenintegerblog at 10:08 AM