Soviet direct Elem Klimov’s second feature, Adventures of a Dentist, is a kind of mix between early American comedies such as those of Charles Chaplin and W. C. Fields (obviously Max Sennett’s The Dentist comes to mind) and the absurd Eastern European traditions of storytelling. Even Gorky’s The Overcoat seems to be hovering in the background of this dark comedy.
Unfortunately, until the recent Criterion release very few moviegoers outside of the festival-going aficionados have had the opportunity to see this wonderful work. Because of early censorship problems, it was allowed only a very limited audience in the Soviet Union off 1965 and has long been completely unavailable on DVD.
Too bad, because is one of the most likeable Russian comedies since Aleksandr Medvedkin’s 1935 Happiness. Except here the young likeable oversensitive hero, Sergey Petrovich Chesnokov (Andrey Myagkov) is far more likeable and charming that any of Medvedkin’s figures. 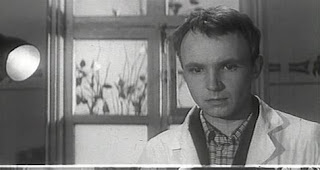 This young dentist, fresh out of dental school studies, arrives in a provincial Soviet city to take a position in the local clinic, but having given a great deal of pain to one of his school-day patients, is absolutely terrified of his new position, and shows up on his first day of work late, sitting in the waiting-room with his patients instead of joining his new colleagues.
In this town, however, everyone knows everything, as one doctor suggests, and he is soon drawn into the back rooms of the clinic, garbed in a doctor’s white gown, and assigned a patient.
Evidently in this period, the major activity of Soviet dentists was simply tooth extraction instead of any filling of cavities or root canals. And you read the depths of fear that most of the waiting patients feel simply through the expressions on their faces.
After a few attempts at postponement of the extraction, Chesnokov picks up the dental tool and amazingly extracts the tooth of his patient without any pain. It is almost as if the dental forceps behaves like magnet, the tooth suddenly appearing in his hand without the patient even perceiving it has been removed.
In such a small, gossipy world, the wonder of his technique immediately makes him a beloved hero, as soon after everyone in the clinic flocks to him, ignoring the older and more established dentists. One dentist, who truly loves his city, Yakov Vasilyevich Rubakhin (Yevgeniy Perov) determines to leave, having lost most of his former patients to Chesnokov. Dentist Lyudmila Ivanovna Lastochkina (Vera Vasilyeva) is about to follow, particularly—after confronting Chesnokov about his new popularity and near hero-status—the handsome young dentist seems to be so clueless he cannot imagine the uproar he has caused or even why he has become so very popular with the people. His entire goal has simply been to cause no one any pain. 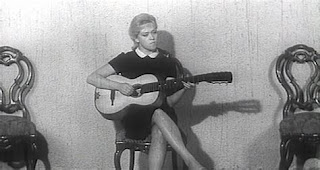 The film is made even more fun through the appearance of the folk-singing young woman Masha, daughter of Chesnokov’s supporter, Panteleymon Krymov. Masha (Alisa Freindlich), who has long delayed a trip to the doctor, sings almost looney songs about the moon, cars flying, and other absurd conceits (the music by Alfred Shnitke is one of the film’s treats). About to be married to a young man whose first fiancé left him alone at the altar, she determines to have her own bad tooth extracted by the “painless” doctor.

By this time, however, Chesnoko perceives that he is in jeopardy, as a committee suddenly appears in his office to oversee his “controversial” methods. Finally waking up to the other dentist’s concerns, he correctly identifies her tooth’s problem, and instead of doing his miracle extraction, sends her to another clinic, claiming that he cannot help her. The committee concur with his evaluation, but in the process his reputation is immediately deflated, and because of her visit to the clinic Masha, like her would-be husband’s former fiancé cannot show up to attend the wedding.
A few townspeople recognizing how the bureaucratic system gradually has beaten down anyone with exceptional talents, try to save him by arranging a demonstration of an old man, suffering clearly from many diseases. But not only has the young talented dentist lost his will but also his magic. The old man only suffers as he pulls on the tooth just as the comic Fields might have working of the poor elderly woman who dares to visit his office. 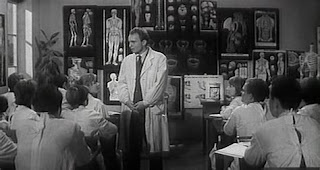 Retiring from dental work, Chesnokov half-heartedly and quite strictly teaches dentistry to students, rushing off the moment the bell rings to live in a new life with a wife, self-admittedly in a new happy existence made possible by pretending he is living in another place within his own imagination.
A final patient appears, in dire need of his “magical” abilities, despite the fact that he claims he is no longer able to operate; not only has he lost his “touch,” but he has abandoned his former career. His pupils gather round him to prove that he, at the very least, is a capable teacher; yet the one to whom he assigns the extraction, seems quite incapable. As he is forced now to prove his teaching abilities, another young female student suddenly steps up and, just as magically as her teacher in his former life, extracts the tooth, even while we must now predict she will certainly face the same difficulties in the future as her teacher has in his past. 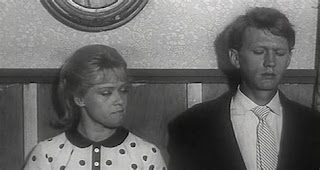 Is it any wonder that the Soviet authorities of 1965 did not want to this film to be seen? The past is always the present in this world: the dreams of the young singer destroyed by a man who has abandoned his talents to the status quo and the gifted dentist himself having almost left reality. Klimov claims that the Soviet culture, as it was, wears one down. Special talents are turned against one and can easily destroy the bearer of new possibilities for the culture.

Klimov’s own life seems to prove that. Married to another great filmmaker Larisa Shepitko, after this film, he made 3 other movies, including his masterpiece Come and See. Yet after her death through a car accident in 1979, he gradually gave up his filmmaking, and eventually, his role as the First Secretary of the Filmmakers' Union. Although he suggested he might what to return to being a director, in 2000 he commented: "I've lost interest in making films. Everything that was possible I felt I had already done."
He died in 2003, mostly unknown, even in his home country. Like the hero of his film, it is as if, near the end of his life, he was worn down; as he say in the English-language metaphor film-making was“like pulling teeth,” said of something that is especially difficult, tedious, and requires an extreme amount of effort, or is done in the most difficult or unpleasant way possible.

Posted by greenintegerblog at 9:59 AM