arriving where you began
by Douglas Messerli

Fernando de Fuentes’ Prisoner 13, one of a trilogy of his films devoted to the Mexican Revolution, is often cited as one of the best of the first generation of Mexican filmmaking. And there is most certainly a great deal to like about this movie.
The “hero,” if one can describe him as such, is a drunken womanizer and generally bad-tempered district military leader, Colonel Julián Carrasco (Alfredo del Diestro), who almost before the film establishes his character loses his wife Marta (Adela Siqueiro) who tired of his abuse leaves him, taking his young son, Juan, with her. Marta and son “disappear” so that Carrasco cannot find them, and the child grows up to be a handsome and obedient young man (Arturo Campoamor) who courts his girlfriend sweetly through her metal-barred window.
Yet as the revolution progresses, Marta is understandably worried for him, particularly when he goes out at night to woo his lover. Bad things are happening, and soon after we see a military sweep and arrestment of the revolutionary leaders, some of them in the very neighborhood of Juan’s girlfriend, Lola (Alicia Bolaños), ordered by the governor and carried out by Carrasco’s thugs.
Locked away in a room, these men know their fates—they will soon be shot—most of them bravely standing up to that fact and others terrified by the prospect. Although we get too few scenes and very little knowledge of their guilt or innocence (all seem to accept their guilt), some of these scenes are the most touching of this film. A father reassures his son, their leader sits alone pondering his fate, others urgently whisper conspiratorially. Outside crowds discuss the arrests, quickly escalating the numbers from a dozen to hundreds. Fuentes shows us the terror that all feel in the city and the horror of those who attempt to make change. 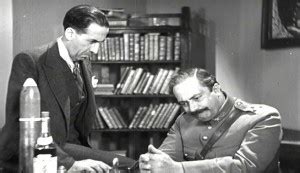 Yet there is another aspect to this movie that, at moments, is almost comic. First, Carrasco is a bumbling fiend, his desk holding, at all times, a bottle of whiskey or rum and a large humidor that looks like a giant dildo, as if to certify Carrasco’s own uncertainness about his macho behavior. Secondly, even though the military leader refuses to see any visitors, his now closed chambers are easily intruded upon by his wealthy drinking buddy, Signor Zertuche (Luis G. Berreiro) who has been approached by a wealthy woman, Señora Martinez and her beautiful daughter who together offer money and, through the daughter’s flirtatiousness, possible sex in return for the release of their son and brother, one of those arrested, Felipe Martinez.
Zertuche not only takes their bribe but, after contacting Carrasco, convinces him to release the prisoner, take in a large sum of money—which, in order to raise, the Martinez’ must sell their ranch to the bank for a fraction of the price it is worth—and contemplate a continued friendship with the boy’s sister. Unsurprisingly, he will rake in another 4%. 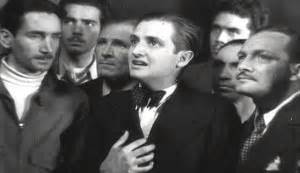 Yet, since he has already sent the list of those to be executed to the governor, Carrasco is terrified that his act will be uncovered. Clever Zertuche suggests he simply arrest another man who looks like Felipe and execute him in his stead.

This 1933 film is, obviously, a somewhat preposterous melodrama, so that when we discover the anonymous man the military arrests is Carrasco’s missing son, Juan, we are not completely surprised. And the last third of the film is quite dramatic and heartbreaking as we watch the young innocent, now surrounded by the suspicious revolutionaries, attempting to sort out the reality of his sudden new fate, a transition as in all great drama from love to death, having been transformed into Prisoner 13.  Is he truly different from the others?
When Marta discovers what has happened to her son, she, like the Martinez women before, joins forces with Juan’s girlfriend, Lola, attempting to visit her former husband—without much success since Carrasco has retired for the night, and his guards not only disbelieve Marta’s claim of marriage but are terrified of waking the beast for whom they work.
By daybreak, the military brigade have already gathered the prisoners in the courtyard, and have sorted them into groups, to be shot.

Marta spends far too much time talking about other things before she finally is able to explain that Juan is now among the revolutionaries about to be executed. And we are near certain that, despite Carrasco’s made rush through his own executioners, to save his son, he will not make it in time to save the boy. In the distance, we can hear the guns go off. 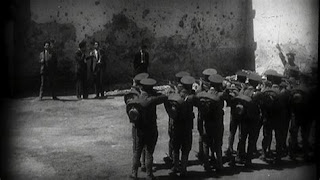 Had Fuentes left it there, the irony and tragedy of events—or perhaps even the righteousness of it, comparable to God’s demand that Abraham sacrifice Isaac to demonstrate his belief—this piece may have stood as a masterwork of its time.
Yet the film doesn’t end there, but with the utterly preposterous notion that the drunken Carrasco has dreamt the entire action, in a continuation of the first scene of the film. Finally, as his friend has long suggested, he decides to lay-off the booze, throwing the bottle to the floor.
All one can imagine is that whatever was in that liquor sent the would-be villain into a mind-bending trip into the future—or, and unfortunately, more likely, our director was a coward, still terrified several years after the revolution, that he might be himself arrested for his visionary statements. But in doing so, a moving drama has been turned into a story like those of O. Henry. And a potentially great work of cinematography converted into a kind of campy and, yes, comic, satire. The trip may have been good, but I simply didn’t like the destination.