So many critics have found Leos Carax’ perplexing and have described it as utterly surreal that I’m not certain the film, sent to me by Netflix yesterday, was the same one they saw. Yes, there certainly are many strange moments in Holy Motors. Limousines speak to each other, one of the limo’s driver returns home with a complete plastic face mass, and the activities of the film’s hero (Denis Lavant) at times are almost inexplicable. 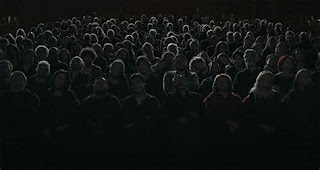 Yet, what it clear is that this is movie about making movies, about how to entertain an audience that from the first scene of this 2012 that has basically fallen asleep when it comes to serious filmmaking. And the sleeper of the first scene, nicely ensconced in bed with his dog, rises, he encounters a long hallway wallpapered with a black-and-white forest scene, through which, after unlocking a panel, he enters the theater with the sleeping audience of the first scene.

The rest of his day, after leaving his loving family, is spent in his portrayals of various figures assigned to him, as if he were accepting a series of roles out of the old TV series Mission Impossible, a wonderful TV regular which my husband Howard and I dubbed as Mission Implausible, but which we still loved to watch each week.
As in that series, we see him—in the limo driven by a beautiful and taciturn woman Céline (Édith Scob)—carefully applying facial attachments, false mustaches, beards, wigs, and other applications in order to play out the various roles which throughout the day he is assigned: in one he is an old beggar women; in another—dressed in a tightly-fitted latex costumer, festooned with lights, he plays out a 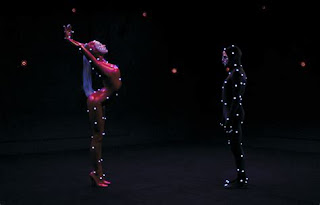 kind of Kung Fu hero, who through back-lit scenes and a running treadmill, fights out endless battles with nonexistent enemies before having metaphoric sex with a latex-covered female; in another scene he becomes a kind of madman, literally chewing up the scenery (in this case flowers from the famed Paris cemetery Pere Lachaise strewn on gravestones that instead of naming the buried ask us to visit their websites). In this scene he also kidnaps a beautiful photo model, rushing her off into a cave-like room where he rearranges her gown to represent a Muslim woman before undressing himself and revealing a total erection. Gently, she puts his head to her breast before he falls asleep on her lap, as if she were saving her life like Scheherazade confronting her sultan.

In the midst of these mad-like maneuvers the always-on-call actor, Monsieur Oscar (obvious a punch at the US film awards) performs, with other musicians a rather delightful accordion concert in a church, before moving on to become a father picking up his shy and unhappy daughter from a party whereat she has mostly hidden in the bathroom. Soon after he dresses as a scarred gangster, violently slashing his enemy in the throat before scarring the other man’s face to look like his own.
He shoots a banker and is killed by that man’s bodyguards. He is a dying old man visited by a niece, Léa (Élise L'Homeau), and dies, only to arise again to meet a fellow thespian, who sings a song suggesting that the two once had a child together. She has her own “assignment,” in which as an airline stewardess she meets her partner only for them both to leap to their deaths from a highrise building.
If the audience is asleep, so too is Oscar getting tired, yet, as he explains, he loves the roles, finds pleasure in acting itself, even if Carax makes it quite clear that the genre pieces in which he performs have utterly no meaning or coherence. The camera, having completely become invisible, is only the director’s camera. Filmmaking for Oscar has become a kind of life wherein he goes without meals and is “getting tired.”
By film’s end even the several limos used by the various actors who inhabit them know that their time is limited. Who’s interested the glamor of filmmaking today they hint.

Carax’s quite brilliant film, to me, was not a surrealist mish-mash as so many otherwise sane reviewers described it, as a quite funny satire of the industry, particularly the world of actors who day in must take their assignments, turning their lives inside-out to become people other than they really are. Love is on run. In the end, even the seemingly caring limo driver, who from to moment advises her rider of his next appointments and worries from him having eaten nothing, returns to her own domestic situation in a mask, obviously pretending someone she is truly not. After all, this actress herself played just such a figure in Eyes without a Face.
In this film it is not the motors who are truly holy in their long drives across the cityscape, but the actors who have given up their lives to often utterly absurd and meaningless pretense.
If, as Roger Ebert argued about the film: “It's not tame. Some audience members are going to grow very restless” yet  at least, unlike the audience we see at the beginning of this energetic film, they will not fall to sleep.
Los Angeles, July 7, 2019
Reprinted from World Cinema Review (July 2019).

Posted by greenintegerblog at 9:41 AM