nature on a leash
by Douglas Messerli

If there were ever a question of independent director John Sayles’ ability to gain a wider popular following, certainly his 2002 comedy-drama Sunshine State should push away all doubt. While Sayles’ film, in its focus on several different families in the small Florida town of Delrona Beach and environs, is rather convoluted, but its characters (all excellent actors) draw you into a world that is gradually being wiped away by developers, while whose leftover denizens are fighting the impossible battle of maintaining a status quo.
The film begins with a group of wealthy retiree golfers, led by comedian Alan King, who, like a Greek chorus, cynically tell of the changes happening to the area (filmed mostly on Amelia Island, Florida), luring in just their kind. As King or another of his group describes it, the developers are putting “nature on a leash,” taming the wild growth and animal life of this outlier paradise, into a place where the well-to-do can finally feel comfortable. It is a familiar theme in contemporary life: big business against small. Japanese director Kurosawa could have made a different version of this film. 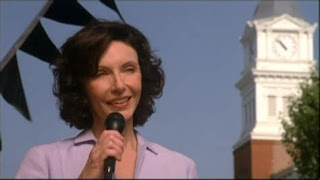 Yet the beach’s founders and survivors are also tough; after all they have been forced to be living a community so small that everyone judges one another, and public survival is expressed in ridiculous celebrations such as the current mayor, Francine Pinkney (the wonderful Mary Steenburgen) attempts to create in her annual Buccaneer Day Parade. One of the earliest events of the film, in fact, is the burning of one of that parade’s floats, set afire by a young, likely-to-be arsonist named Terrell Wilkins (Alex Lewis), obviously unimpressed by Ms. Pinkney’s annual celebrations—and perhaps rightfully resentful of them, particularly since she represents mainly the white folks who have settled this community. Pinkney, when later we actually see her “celebrating” her made-up event, looks so pained in the process of awarding to Wisconsin folks the treasure chest of jewelry and gift cards that we are forced to perceive the community charade. A bit like the stereotypical southern “bitch,” she smiles constantly while carefully revealing her detestation of the visitors she is supposedly celebrating. 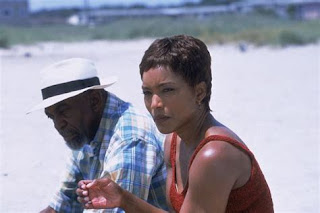 Although this film is very centered on the difficulties of the present, however, it is even more grounded in the past. Not only are most of its figures the original inhabitants (in modern times) of this island, but they are trapped by their commitment to the world they created. The central figure of this movie, Desiree Stokes Perry (Angela Bassett) returns to her mother, Eunice (Mary Alice)—now the caretaker for the problem-boy Terrell in the nearby black community of Lincoln Beach)—after years of living in the north and now having married a handsome man, Reggie (James McDaniel), an anesthesiologist—in a not-so-very-subtle reference to his gift of putting people to sleep, or, in Desiree’s case, at least making one feel at rest in the turbulent world from which she has escaped.

Desiree, as a young girl, we discover, was one of the high-school football player (now Heisman Trophy winner) Lee "Flash" Phillips’ (Tom Wright) lovers, who, when she got pregnant, was sent away by her mother to Georgia to have the baby which died in birth. The resentment and fury of that expulsion is written on her face, even as she attempts to make amends to her mother for her long refusal to return. Reggie, a gentle being, gains the approval of the cultural fossil of well-meaning Eunice; yet we recognize the mother as an incredibly loving woman who simply could not face the community disavowal or their notions about how blacks behaved. To engage her new-charge in something creative, she demands a wooden coffin be built—a bit like Addie in William Faulkner’s As I Lay Dying; yet, although to her daughter she may appear as a kind vulture, she is not preying on her child as much as the society has preyed on her.
Desiree soon re-encounters her youthful lover, discovering that he is now working, on the side, for the business interests who intend to gentrify the island. Eunice is not interested in selling her house. 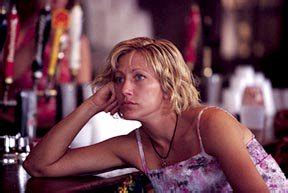 At the other end of the island, Delrona Beach, a vital young woman, Marly Temple (Edie Falco) is locked into a just-as-smothering relationship with her parents, her elderly, nearly-blind father, Furman (Ralph Waite), who, after the death of her two-twin brothers in an accident, has unintentionally imprisoned her as the caretaker of his bar/restaurant, forcing her to abandon her dreams of being a marine biologist. The closest she gets to her dreams is portraying a mermaid in a local male voyeur bar. She married a no-good husband and is currently in a relationship with a would-be golfer-pro, who we quickly perceive as another future failure. Is it any wonder that she finds one of the landscape designers for the property developers, Jack Meadows (Timothy Hutton), to be a man of interest, even though she is extremely wary of his intentions?

Marly might have been saved a bit from her circumstances if it weren’t that her mother (the always amazing Jane Alexander) weren’t so self-involved (others might describe her as community-centered), who runs a local non-profit theater in which she stars in roles such as Electra and other major female heroines.
At least Desiree has supposedly escaped, but Marly has no route out, working herself to death as a bartender/manager who has so many desires to be fulfilled that she might as well be in that cage of water, performing as a mermaid, without a breath of air. 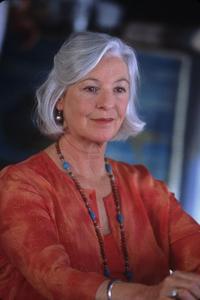 She is finally ready to throw in the towel, so to speak, accepting the proposition to sell the bar, despite her father’s resistance. She consults her absentee mother, who is perfectly happy to talk about the sale, but who proposes so many qualifications that such a deal would be impossible. As she blithely tells her daughter, “How to you think I’ve been able to run a non-profit company for all these years?” I almost applauded and would have had I not been home alone watching this film on a Netflix loan.

In the end, the past goes deeper and darker, as the tractors, attempting to dig up the “wild” land of the island, suddenly uncover sculls, those of the most ancient of the areas’ citizens, original American Indians, whose sudden appearance turn the entire area into a space of national significance. Golfers beware! You have no right to play through this hallowed ground.
Finally, it seems a little bit simplistic to simply have the issue resolved by history itself. Yet that has been the subject of the entire film. History, the past, memories, investment in the culture are the subjects of this work. The strong women, all the film’s characters, have been fighting all their life to make a meaning in a world apart from the mainland, which attempted to attract visitors with ditties such as the Irving Berlin song which closes this movie:

[Refrain:]
If I had my way, I'd always stay
In Florida among the palms
With its peaceful air of "I don't care"
And lazy atmosphere that calms
My one favorite haunt
Is a palm tree, and all I want
Is someone just to rest in my arms
I'd love to live among the bamboo huts, the cocoanuts
There's something in the climate that charms
Heaven's corridor is sunny Florida
Home of the shelt'ring palms

Posted by greenintegerblog at 10:28 AM