the company way
by Douglas Messerli

Although Ray has long made films that deal with the social and political conditions of his native India, Seemabaddha seems a bit different simply because of its comic treatments of those issues, seldom spoken about in the reviews that I’ve read. At least my favorite guidebook, the Time Out Film Guide recognizes it as a satire.
The film begins, in fact, with a parody of a quite ridiculous advertising promo for the fan-making company—playing with notions of “hot” and “cool”—for whom the film’s ambitious but quite guileless sales manager, Shyamal (Barun Chanda), works. Coming from a small provincial town, where he had studied with his wife Dolan’s (Paromita Chowdhury) father, Shyamal has moved up quickly in the small company’s ranks, and he now even aspires to one day be the company’s director. This is after all the growing metropolis of post-colonial Calcutta, where, while most live in total poverty, an increasing number are attaining significant wealth.

Shyamal and Dolan live in a stylish company-owned apartment which they delighted to be able  to reveal to Dolan’s visiting sister, Tutal (Sharmila Tagore) along with their attendance at stylist restaurants and parties, their purchases in the very best stores and hair parlors, and their regular visits to the horse races. They have proudly become the new “colonialists” and are determined to take advantage of Shyamal’s savvy and eagerness to achieve their new life.
Having retained her far more provincial upbringing, the lovely Tutal feigns disinterest and even some apparent disproval of their new lives. Yet, Ray cleverly reveals that beneath her outer surface, Tutal is not only impressed with but envious of her sister and brother-in-law’s sophisticated world. As even Shyamal admits, perhaps he should have married his wife’s sister.
Quietly, and without event, we see the sister and brother-in-law warming up to one another. And even the audience perceives this company man, somewhat akin to the central figure of Frank Loesser’s Broadway musical How to Succeed in Business without Really Trying of 4 years earlier, as a highly likeable anti-hero. This Calcutta new-comer, moreover, does indeed know his new business and is trying desperately to succeed. 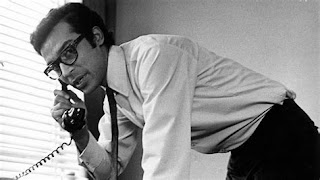 He’s just procured, moreover, a very large order of the company’s fans to Iran on the condition that they are delivered on time.

Ray’s movie takes a long time to actually jump into the inevitable nosedive that all such wide-eyed idealists must face, and the film spends a great deal of time in building up Shyamal and Dolan’s fall. But suddenly the moment comes when he is told that the numerous fans about to shipped are all defective. A small painting job has rendered them unusable. 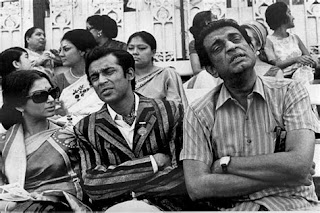 A bit like the J. Pierrepont Finch hero of the musical, everything quickly turns dark, as Shyamal must suddenly cook-up a new story to protect the company’s and his image. It appears that the only way out of the contractual clause is if there is a political or social upheaval, which the sales manager and his cronies stage, bringing the company’s workers to strike and nearly killing a night-watchman.
The company is shut down, giving the employees time to re-touch the fans and successfully ship off their order, allowing Shyamal to maintain his position.
But we can only ask: “at what cost?” He and Dolan may be able to maintain their new lifestyle, but we realize that the budding relationship with his sister-in-law is over, and any true love he might have found will return to the provinces. And, finally, we perceive that despite all of Shyamal’s clever strategies he probably does not have a great future in that fan company. Too many people now know about events, and he will never rise among their ranks to become to company’s leader. Indeed, he is locked into a pleasantly meaningless life of hair-dressing salons for his wife and outings together at the horse tracks. 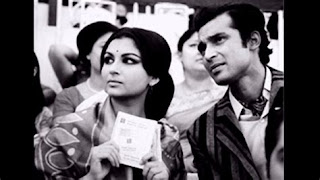 In a sense, the benefits he has reaped have locked him into a place where he cannot deny them but perhaps no longer enjoys the sweetness they once offered. In the musical, Finch went on to become the head of the board, but we only must wonder how long he and his wife Rosemary enjoyed the company’s spacious apartment, so far from the simpler life of New Rochelle housewife she had imagined for herself. And living in Calcutta, Ray’s couple must everyday face the disparity that separates them, through lies and manipulation, from the rest of the city’s population. Yes, Shyamal did marry the wrong sister, a woman who might have helped to take his youthful energy in a very different direction.
Like so much of satire, in the end Ray’s deft work leaves a sour taste in one’s mouth.

Posted by greenintegerblog at 8:10 AM