a world with hearts of ice
by Douglas Messerli

Akira Kurosawa (writer, based on the novel by Fyodor Dostoevsky) and director 白痴 (Hakuchi) (The Idiot) / 1951

I almost have to admit that while watching Akira Kurosawa’s film The Idiot the other day, I was so overwhelmed with its images that I almost forgot its plot. I will attempt to reconstruct some of that, but it is truly not what this film, based on Fyodor Dostoevsky’s novel, is about. 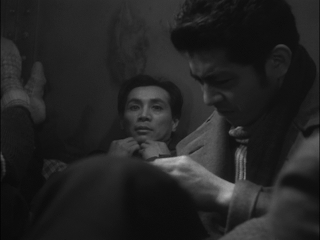 Yes, the idiot, Kinji Kameda (based on Prince Myshkin) (Masayuki Mori) does return home to Sapporo (similar to the cold icy world of the original), and meets Denkichi Akama (based on Rogózhin) (the always wonderful Toshiro Mifune), and the two women with the lecherous men surrounding them appear, each of them a bit startled by Kameda, described as an idiot simply because—after escaping death as a traitor—becomes determined to never again hate any man or woman. He, like Erasmus’ Christ and the totally innocent character brilliantly played by Peter Sellars in Being There, is a kind of holy fool, a seeming simpleton, who perceives a truth far beyond what others can.

Akama is returning home to his receive his inheritance and to his youthful love, Takeo Nasu (Stesuko Hara), who in his absence has been subjected by the abusive Tohata (Eijirō Yanagi), who has basically taken her as a lover from the age of 14 (echoing these days a Japanese version of the American monster Jeffrey Epstein). Afraid that his behavior will bring him down, Tohata is willing to provide a dowry of Y600,000 to Mutsuo Kayama (Minoru Chiaki), the man to whom she is now engaged, but the intruding youthful admirer Akama offers Kayama Y1,000,000 not to marry her. Taeko, perceiving herself a completely fallen woman, is confused until the visiting idiot, Kameda looks into her face to find the truth of her inner being: stating that she is a good woman, still untarnished despite her childhood and current sexual abuse; as he puts it “You’re not that kind of person.” 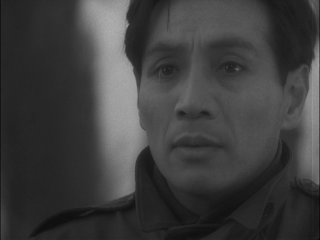 He even invites her to stay with him, even offering marriage, but she refuses, in part because she recognizes his purity and does not wish to abase him, dangling out the idea of a possible marriage with Akama.

And, yes, there is another woman whom Kameda has transformed, Ayako (Yoshiko Kuga), a young girl who is now interested in marrying him, but only after a visit with the woman she perceives as a potential rival. As the Criterion commentary puts it, with great understatement, “the meeting does not go very well.” Nasu falls to the floor and is killed by the jilted Akama. 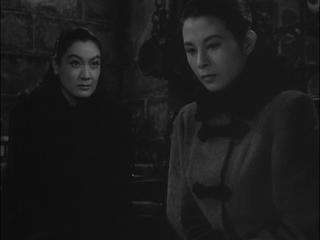 Plot, in this case, says nothing. And in Kurosawa’s film is almost just an operatic gesture. What really makes this film so significant, one of this director’s most important films I’d argue, are the numerous icy landscapes, which reveal the inner characters of those who, in Sapporo have learned how not to love. And the ice carnival scene in which the skating figures are masked in terrifying costumes—so reminiscent of the later Susumu Hani images of child abuse in his 1968 film, Nanami: The Inferno of First Love—is a horrifying scene of terror that laying behind the actions of the entire community. In that scene alone we come to perceive that the abuse Nasu has suffered, the attempted murder of the “wise fool” Kameda, and the final murder of the beautiful Nasu, are not just incidental events, but something in which the entire ethos of the community secretly supports. This is a world with hearts of ice.
It probably should not be a surprise, given what I’ve just described, that this film was a failure in the theaters and almost ended Kurosawa’s career. The studio insisted upon a cut of almost 100 minutes from the original 3-hour release, and that version has apparently now been lost. The cut I saw, the best available these days, is the only version, still amazingly powerful. But what might we have discovered about this great Japanese director’s vision from the full original?
This is a nearly obsessive film, and you can perceive in every one of its frames just how effected Kurosawa had been by Dostoyevsky’s original fiction. Abuse, love, envy, and the endless results of those obsessions are at the heart of the film and drive it passionately forward in a way that later in his career, warrior figures, battling out their hates in vast fields of struggle, would replace with the inner psychological struggles of these characters. If Ingmar Bergman had been Japanese, he might have created just such a film.
Los Angeles, August 21, 2019
Reprinted from World Cinema Review (August 2019).