will you still love me?
by Douglas Messerli

Andrew Haigh (screenplay, based on the book by Willy Vlautin) and director Lean on Pete / 2017, USA 2018

Like all previous Andrew Haigh movies, his newest Lean on Pete (from 2017, 2018) is a quiet study about characters. There is something so honest and straight-forward about Haigh’s films that you almost don’t want to intrude upon them; they seem to be documents, without the apparatus of “documentation,” of real people so deeply felt that it’s hard, a moments, to watch—despite the fact that they are never for a moment sentimental. The folks he portrays are tough survivors, a young British gay man living a relatively straight life, but dipping each night as he escapes his straight friends into local gay bars; a couple who suddenly are faced with an event before their marriage wherein they must face a love beside their own; and in this work, a gentle hometown boy, living basically in a neglected relationship with his philandering father, who falls in love with a now-old and not-so-glorious, race horse. 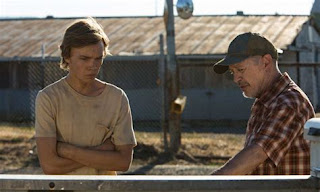 Charlie (the wonderfully underacting Charlie Plummer) lives with a father who, without the director saying it, is truly abusive. He does not sexually or physically abuse his son, but basically ignores him. Leaving the 15-year-old alone for most of his days in a small rented apartment where there are so many roaches that Charlie keeps his breakfast cereal in the refrigerator to protect it; when the father Ray (Travis Fimmel) does return home, it is usually with a woman with whom he retires with into his bedroom. Haigh never once calls it abuse, and Charlie doesn’t even perceive it as such, but we recognize it for what it is. And in the morning, when one of Ray’s take-homes, a secretary (Amy Seimetz) in the company for which he works, actually cooks the two breakfast—a sad version of airport food of scrambled eggs and packaged sausages—the young boy is so appreciative we immediately recognize the parental figure he is missing in his life. You can see from Charlie’s rail-thin frame that he simply is not getting a proper diet, which Haigh subtly reconfirms when, after Ray’s one-time girl-fried leaves the table, and before his father can claim it, spears the small sausage on her plate she has left behind. He is starving—although the director does not overdramatize this—for food and love. 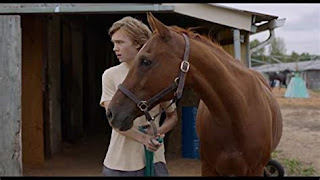 Yet, the ode-eyed Charlie seems almost unable to complain. He was, apparently, a football and perhaps racing hero in his brief education at a local school, and he stills runs every morning, long distances, putting him in touch with a nearby Portland racing track. Looking for a job (his father gives him only a few dollars on which he might survive the day), Charlie encounters a horse-trainer, the more than slightly sleazy Del Montgomery (Steve Buscemi), who has a stable of horses which he literally runs to their deaths, winning sometimes in small tracks from Oregon to Mexico, but quickly selling his race-horses when they have lost their abilities to run into their deaths, either as horse-meat or glue.

Del loves the young boy for his eagerness to work, mucking out the horse shit, and willingly leading the horses to their trailer for the voyages south and north. The fact that Charlie is willing to sleep in the car or on the straw of the horse bin gives us another insight into how difficult his life has been; besides Del pays him 50-60 dollars for each event, a huge amount surely for a boy who has never previously had any money to even buy himself a lunch.
And even if Del, when it comes to horses, is more than detestable, when it comes to Charlie he does, in some respects, serve as a kind of father, scolding Charlie for his table manners as the kid chows down what he is served in a local restaurant the moment the plate is put before him. Again, we comprehend, without the director telling us, just how starved this boy is. But Dell’a upbraiding him as having no manners is also one of the first times, we recognize, that Charlie has ever received any parental advice. The scene is so painful and uplifting, that we want to cry and applaud at the very same moment. Haigh is able to achieve these contradictions by simply presenting his characters in a way that we recognize their flaws and their failures simultaneously. Judgment is not really in Haigh’s vocabulary.

Soon after Charlie meets a woman, jockey Bonnie (Chloë Sevigny), riding Del’s horses, who might have served as a strange kind of maternal figure in his life, except, working over the years as a small-time jockey, has made her so cynical that she cannot help the boy with anything more than the advice to not become too attached to his favorite horse, Lean on Pete, (“he’s just a horse,” she reminds him) a gentle being—unlike some other horses owned by Del—who also has clearly taken a liking to his new caretaker. Her advice is not heeded.

After winning a couple of races, Lean on Pete, who comes in last in a race in which Charlie has begged Bonnie to ride instead of the final winner, on whom she had sat.
If things weren’t bad enough for young Charlie, his father is brutally beaten by the husband of the secretary which he has brought home, and the boy, demanding a neighbor call 911, visits the hospital to discover his father in serious condition. Forced to work now just so the two of them might survive, Charlie returns to the hospital to find his dad has died.
When he hears that Del has just sold Lean on Pete to Mexico his heart, driven now by pain and loss, forces him to escape with the horse with Del’s van in an attempt to reunite with his aunt, obviously kept out of his life by his father, fearing her attempts to claim that she should care for his son. 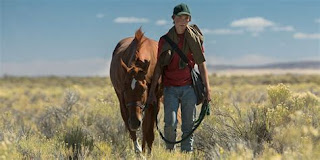 The movie thus transforms into kind of “on the road” film, in the tragic manner of Thelma and Louise. No, fortunately, they do not leap off the Grand Canyon, but in their long trek from Oregon to Wyoming, to a destination of which Charlie is not very sure off, they do suffer the problems that might make anyone leap off a cliff. When the car breaks down, the boy is forced to abandon it, walking his horse through a territory with often little water and food. The boy is starved, but so is the horse, and at one unpredictable moment, leaps away from his caring human to be hit by an automobile which kills him.
In a kind a classic Haigh scene, Charlie attempts to revive the horse who is quite clearly now dead, while having to just as quickly remove himself from the scene before he is discovered. Once again, the director, retreats from what might have been bathos, through the inevitable instincts of the young boy, who has thoroughly learned to evade the dangers in which he has so long been embraced. Is it a crime to love? the film seems to ask.
After a great deal of difficulty, he does finally discover his aunt Margy (Alison Elliott), who greets him with open arms, truly willing to care for him. But the now disillusioned child can only ask, if he needs to go to jail will she still care for him. Charlie, we perceive, is a child destroyed by the world around him. We can believe in his salvation or not. Haigh doesn’t provide us with an easy answer, thank heaven. It is up to us, with our personal doubts and empathy to provide the answer.
I suggest that if you see this movie (and you should), you also read Jaimy Gordon’s important book Lord of Misrule, a fictionalized version of a young woman who lived apparently a life in racetracks not unlike that of Charlie Thompson.

Posted by greenintegerblog at 10:24 AM