ascending and descending
by Douglas Messerli

Italian director Antonio Pietrangeli’s 1960 tragi-comedy is the kind of film we seldom see these days, a sort of neo-realist romance that deals with the difficult subject—at least for US Amerians—of prostitution. For Italians, who had long granted licenses for brothels, generally controlled by women instead of street pimps, allowing the prostitutes themselves to make a good living, the issue was an important one. The bordello in which the stars of this film work, a rather run-down house in Rome, forces them, much like the characters in Mikio Naruse’s When a Woman Ascends the Stairs, to nightly ascend the steep steps to their rooms, customers in tow, to descend into what church described as moral depravity, a journey that is becoming more and more difficult for the slightly older women such as Adua Giovannetti (Simone Signoret). 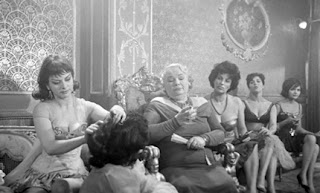 Yet still, they are terrified with the Italian Merlin Law of 1958, which closed these legal houses, virtually sending these women back into the streets. The hypocrisy of the law is made quite clear in Pietrangeli’s Adua and Her Friends; evidencing perhaps too much sympathy for these women, in particular to US distributors, who stripped the film of a half hour of its running time. Fortunately the Criterion Channel is temporarily showing the full film.

The brightest and perhaps most cynical of these women, Adua—who recalls how during the war men stood in queue to have sex—conspires with three other of her peers—Lolita (Sandra Milo), Marilina (Emmanuelle Riva), and Milly (Gina Rovere)—to each pay in two million lire (even though Lolita can only provide 500,000 lire) so that they might open a country trattoria outside of Rome, perhaps later drawing up some of their customers into the rooms above, a vision not so very different from their previous lives, but, at least, a world in which they might take control. The Merlin law was supposed to have made a clean slate of their pasts, allowing them a new start in life. But a local doctor, a former customer of Adua’s, Ercoli (Claudio Gora), arranges with local authorities so that they cannot be granted a permit to open their would-be restaurant due to their former lives. Instead he connives with them that he should buy the property and arrange through cronies to buy the license for them—if in return they pay him the outrageous sum of 1 million lire a month. In short, he takes on the role of a wealthy pimp, once again putting these would-be independents under the thumb of the patriarchal system from which they thought they had just escaped. They have no choice but to agree with his outrageous offer.

Despite the chaos of the building they have just acquired and the constant petty bickering between them, we soon see them, despite their difficulty with the early hours, slowly coming together as a kind of communal community. Marilina rebels and temporarily leaves before returning with her son after, tired of the hard work, returning to the brothel to try to rediscover the cracks in the ceiling she knew so well; one seems to be missing, she proclaims. Lolita endlessly complains, and even Adua, the most responsible of the quartet, spends more and more time away from their new undertaking as she falls in love with a man she knows she shouldn’t trust, the handsome and charming Piero (who else but Marcello Mastroianni might play this role?). Oddly enough, it is the shyest of them, Milly who takes on most of the cooking, and soon finds herself being courted by an available young man.
After their first days of financial failure, they soon attract larger and larger audiences, visited almost daily by a local priest and, at another moment, by a popular singer, Domenico Modugno, who attends their establishment and sings one of his most noted songs. Suddenly, the light and regularity of their surroundings, a bit as in Guy du Maupassant’s Bel Ami, envelops them into a new reality; without their even knowing it they have become decent, law-abiding women who no longer dream of drawing their customers upstairs. Their constant ascents have finally allowed them a way out of their former descents into a male-controlled universe. 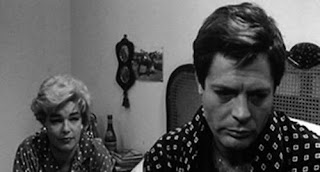 In one of the most beautiful scenes in the film, Marilina, with her trio of friends, has her baby baptized by the local priest. It is symbolic of the respectability to which these woman can now claim. One of their own has now been blessed.
But unlike the du Maupassant tale, Pietrangeli’s film is not so sentimental. Even several weeks in the country (unlike Bel Ami’s two days) cannot save these former sinners from being falsely punished by their society. Ercoli returns, demanding their money and, more importantly, their return to their former profession.
When Adua refuses, the “good” doctor makes sure that their pictures are posted in the local newspaper, and their new world falls apart. They are truly forced to return to the streets, giving up any illusions they might have had about acceptance in Italian society.
The last sad scenes of this film are the most devastating, as we watch Adua on the Roman boulevards attempting to find a customer in the heavy rain. She is now, just a bit older, not so very desirable, and no one will pick her up. The raindrops dripping down her tired face represent her tears, like the tears of the sacrament, which offer no answer, only momentary release.
Los Angeles, August 9, 2019
Reprinted from World Cinema Review (August 2019).

Posted by greenintegerblog at 9:45 AM