Wim Wenders | Alice in den Städten (Alice in the Cities)

Shaking Off the Frost
by Douglas Messerli

Wim Wenders Alice in the Cities begins as a rather artful study of how people from elsewhere have difficulty in attempting to comprehend what the US is all about. I think if I’d landed in Surf City and other Southern spots where this movie begins, I’d be just as confused and would find it near impossible to write an essay about it. Except for Florida, which I hated, I have never attempted to even visit the US South—although I have written about numerous of its writers. Yet I think the major figure of this tale, Philip Winter (Rüdiger Vogler), a man almost already frozen to death despite his early attempts to sing the popular 1964 The Drifters song, Under the Boardwalk. He can’t quite get it right, and under the boardwalk in which Philip is attempting to sing while photographing what he sees, there is little pleasure, for the surrounding world is truly bleak. 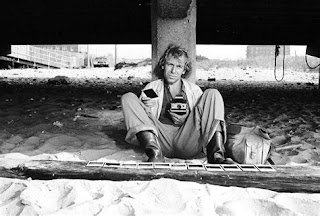 In fact, the whole of the US in this film, which Wenders shot in black-and-white, seems bleak. No glorious visions of afternoon sunsets or even a vision of the lovely afternoon surf of the Atlantic or Bay of  Mexico waters. This is a cruel world, in which, as Philip later describes, everything that might be of interest—for example the movie John Ford’s Young Mr. Lincoln—is chopped up into segments between ridiculous local advertisements, which infuriates the moody writer who has missed his Munich deadline, and cannot get an advance to finish his piece.

The Manhattan to which he returns is a grungy, graffitied world, not the hyper-wealthy tourist destination it is today. I remember just such a city, a few years earlier (1969), and even after this film was shot, when we shared a taxi with a young Southern woman on her way to a Broadway play, who, when we told her that 46th street was her destination, hesitated before descending the taxi, proclaiming: “Oh no, this cannot be Broadway!”

The gloomy Philip gets it right when he asks his New York connection, “How can you write coherently about the US?” No one can, let alone someone from somewhere else. Photographs, taken with an automatic Polaroid camera, where the photo, not in such clear definition, popped out the moment after you shot, taking a few moments to develop, perhaps are the only answer: where was I, what did I just see? Yet, as our moody hero laments, “They never turn out like what you’ve just seen!”
Of course, you couldn’t then and, perhaps, even less so today—particularly when you’re short and cash and have to sell your Chrysler to a cut-rate dealer next to Shea stadium in Queens (another place I lived during my own bleak year in the great city)—experience the pleasures of any such city. Attempting to get a ticket back to Germany, he finds that the German flight-workers are on strike, and the nearest he might get to Munich is Amsterdam. Another woman at the ticket desk, Lisa (Liza Keruzer), who speaks little English, and her daughter, Alice (the amazing young performer Yella  Rottländer), are trapped into the same situation, and Lisa asks that Philip not only help her in obtaining her tickets but stay near to her while she waits out the day until they can travel to the Netherlands. 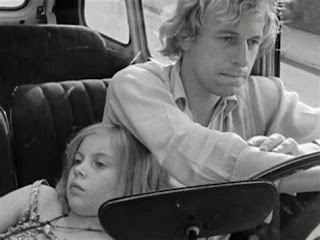 She, apparently, is escaping a failed relationship, since her husband is determined to remain in New York, while she feels the need to return to Germany. Because of their dire financial straits the trio is forced to stay at an inexpensive city hotel (which certainly no longer exists), and, accordingly, must share the room they have obtained.

In any other movie, obviously, the couple would find themselves in bed together and fall desperately in love. But Wenders film is utterly different. Yes, they do share the bed, but Lisa refuses sex, and Philip, at any rate, seems a poor romancer, in a kind of eternal funk about having apparently lost his writing abilities. He “scribbles” as Alice observes, but can no longer produce anything; he’s seems a frigid as his last name and just as unable to enter into any relationship. By the time he awakens, Lisa has left, ordering him, by a note, to take her daughter to Amsterdam where she will meet them. She apparently has business to clean up with her ex-lover.
Philip is so passive and Alice so endearing, that he cannot do anything other than what the missing mother has demanded. As critics have pointed out, today this film would have been nearly impossible to make; the male would be immediately characterized as a pedophile, and the young girl perceived as a kind of Lolita, enticing him at the same moment she is rejecting his intentions. But Wenders makes it quite clear that Philip, although tenderly interested in the young girl, is not at all interested in her body.
When they arrive in Amsterdam, discovering that Lisa has not arrived and is not scheduled to, the film turns into a very strange road movie where the two set out by car to discover Alice’s grandmother, whose name she cannot remember and has only a vague memory of where she might live. Philip lists the major German cities and villages, Wuppertal being the only one that seems plausible to Alice. 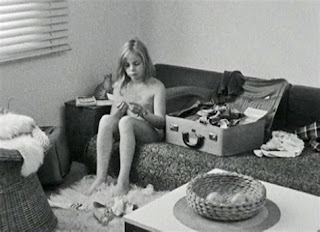 Yet their search there turns up nothing as they rove through the streets trying to search out a spot which the young child might remember. A little bit like Lolita, she demands food, ice-cream, and other small pleasures, with which the nearly penniless Philip attempts to provide her, finally determined after their endless searches to turn her over to the police.

But, a bit like the equally independently-minded adolescent, Georges Queneau’s Zazie, she escapes the police, returning to the man who has now become her surrogate father. They’re soon traveling on to visit the Ruhr district of Germany, which she now recalls is where her grandmother might have lived.
Philip, himself, has evidently come from that region, and it becomes apparent through Wenders telling that perhaps they are destined for one another, Alice in order to discover another father figure, and he to be reawakened to life with the young uncontrollable force he sweetly has agreed to help. Somehow we grow increasingly to love these two lost souls as the movie moves forward. And, I believe we secretly hope they won’t find the probably not-so-pleasant grandmother, living in a lost two-story house somewhere in Germany.
Yet, ultimately, they are tracked down by the police; the missing mother has been found. So Wenders film comes crashing down into its inevitable ending, not very much unlike his much later film, Paris, Texas, another foray in US consciousness. Perhaps, just as Travis Henderson was brought back to life by reclaiming his young son, so, will Philip Winter shake off the frost by temporarily adopting a young daughter in Alice. Certainly they are no worse for wear in their relationship. We can only wonder, however, how the energetic and perceptive Alice might feel about her almost lost mother. Alice has seemingly, moving through the many cities of her life, already lost some of herself, as her clinging to the stranger Philip makes clear. And what will become of him? He has not only lost his career, apparently, but the only person with whom he has bonded. Where is his home, his grandmother, even his mother and father? He has only vague photos which don’t reveal their own realities.