what is a clown?
by Douglas Messerli

I must admit that clowns are not my favorite subjects. I put them in a category just slightly higher than mimes. But there are always exceptions, as in all prejudices I pretend to. The great mime Marcel Marceau was certainly one of these peculiarities in my evaluation of the art: he was a genius and I saw perform live at Washington, D.C.’s Kennedy Center with great delight. Concerning American clowns, I saw the notable Emmett Kelly as a child at the Barnum and Bailey Circus, visiting Cedar Rapids, and found him a memorable childhood figure. And then, of course, there were unforgettable film and TV clowns such as Red Skelton, whose show I watched also as a child. I think both he and Kelly appealed to me as sad clowns, Skelton often crying while laughing ahead of his own jokes.
And then, there was that saddest of cinematic clowns, played by James Stewart in The Greatest Show on Earth, Buttons, who keeps his makeup on whenever he appears in public, afraid that the police will track him down, since he, as a former doctor, helped to mercifully-kill his ailing wife. We might suggest that Cecile De Mille was a bit ahead of his times on this issue. 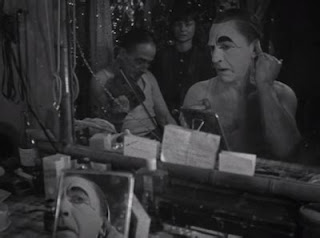 Clearly clowns, to me, weren’t ever truly funny. Jerry Lewis left me cold, and to this day I cannot comprehend what the French saw in him. Perhaps he simply reminded of them of their beloved Pierrot, constantly failing and beaten by the society at large in revenge. But Dean Martin preferred to sing to him, and never beat him to my knowledge. And in English his behavior is what we simply might describe as “corny,” weak jokes, awful costumes, and just plainly ridiculously clumsy-clupsy moves. Had we grown up loving Pierrot, we might have felt very differently. But for me he represented an embarrassment instead of a beloved figure of humor. Even if we American ruffians were not the stiff-lipped British, he represented for me (and the country I believe) something we had long grown out of. The Three Stooges represented a trio I couldn’t bear to watch. As Bergson long-ago made clear, humor is always something else than we think it is.

Despite this, I have continually been fascinated by the European notion of clowns. How can you love Fellini, as I do, without recognizing that his central figures are based often on Commedia dell’arte characters?
And then, one of my very revered directors, Robert Bresson began his career with a documentary of the famous French clown Béby; and almost as shockingly, so too did the rather hard-core nourish filmmaker Jean-Pierre Melville, whose short documentary of 1946, Vingt-quatre heures de la vie d'un clown (Twenty-Four Hours in the Life of a Clown) follows Béby, then the greatest living Pierrot, who in full transsexual-like costume, plays opposite to his “white-clown” partner, Maïss, in a nightly stage show near the end of their illustrious careers. 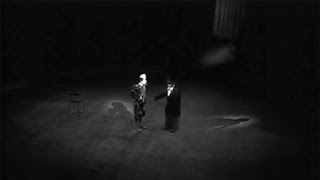 By showing them perform, take off their make-up and return home to the more-or-less regular lives, Melville reveals the truth of the clown(s). These crazy and manic beings on the stage are rendered somewhat real in their everyday lives—although it is clear that the younger Melville sentimentalizes Béby, showing him leafing through his hundreds of photographs and testaments from the past of his renown. Although it is a quite lovely scene, when he commands his pet dog to pray along with him as he settles down to sleep—a gesture which clearly the dog has long submitted to—we might also describe Melville’s scene as approaching bathos, particularly given that despite his nightly vespers, he appears as an almost misogynistic figure to his wife, who brings him hot coffee the next morning. Given the time, we can perhaps almost forgive him, since he daily plays a kind of beaten-down feminine force each night. But, obviously, that is a paternalistic way of explaining Béby’s relationship.
The performances that Melville captured on film are truly what this documentary is all about, and my only wish is that there were more. Perhaps I could come to understand the art of clowning, the myths of the foolishness and deserved punishment with which they are embraced. The clown is a type who does not recognize his/her own absurdity in the society as a whole. We laugh, according to Bergson, because we also hate them, reject their behavior. They are perhaps inside of us, but something we have resisted, removed from our sensibilities in our efforts to become adult human beings. 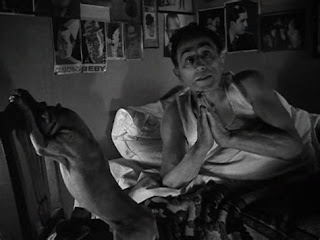 I’ve always wondered whether the laughter evoked from these clowns was different between the delighted children audiences—who perhaps recognize themselves in these figures—and the adults who perceive them as behaviors they have left behind. Béby is, after all, a baby who has never been allowed to grow up into adulthood, and  Maïss has no choice but to remind him of that fact day after day, night after night. Perhaps there is no great of difference between these figures and the later gangsters Melville portrayed throughout the rest of his remarkable career: macho children who live out their lives in a fantasy of riches they never truly deserved, despite their clever machinations to achieve what they desire.
Of course, as Stephen Sondheim has reminded us, we are all clowns, and will always be, stumbling and bumbling through life. You may laugh, but I always cry.


Posted by greenintegerblog at 9:39 AM