John Huston | Let There Be Light

As a Major serving in the US Army Signal Corps, film director John Huston, was asked to focus the last of four films he did for the government on what today we describe as posttraumatic stress disorder among the soldiers returning home for World War II. 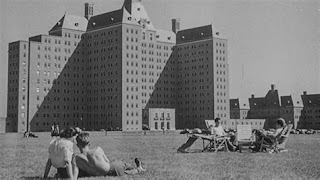 Huston searched out locations from the West to the East coasts, but apparently determined on the largest facility on the East coast, Mason General Hospital on Brentwood, Long Island, not only because of its size but because it was closely located to the Army motion picture production center in Astoria in the Queens of New York City, and because the psychiatric doctors there were open to the idea of his filming their interactions with the soldiers, and claimed that those patients who were filmed actually fared better, not only seeing their changes in their health, but their own interchanges with others who were similarly suffering—although actually from a wide range of PTSD disorders, loss of memory, stuttering, depression, anxiety, sleeplessness, etc.

The overall appearance of this documentary, filmed in the manner of governmentally produced promotional movies, is course, as the narrator (Huston himself) nearly shouts out the problems faced by these very likeable young men, who remind me so much of the kind of soldiers discussing their fears and reservations after the War as in Gertrude Stein’s perceptive Brewsie and Willie. 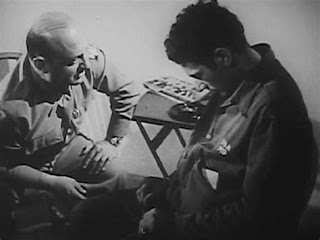 Although the psychiatrists are clearly well-meaning, their loud intonements, their quick-to-analyze language, and their simple lack of, sometimes, gentility, can only trouble us today. At times they appear to find their analysis of their patients better that the soldiers’ own struggles to deal with their psychological conditions.

Yet they do seem to cure a young man, through hypnotism, who could not even recall his name after the trauma he encountered with the Japanese bombings on Okinawa, to remember not only the events that occurred, but his name and life before.
A second figure receives an injection of sodium amytal, putting him also into a hypnotic state, so that he may walk again.
An analysis of the letter “s” helps another soldier to begin to recover from his stuttering. 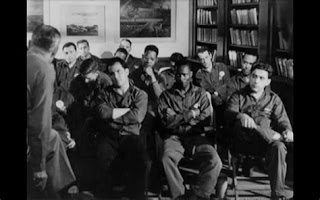 If these quick doctor/patient encounters are not always convincing, their group psychotherapy sessions in which they gather to discuss their problems and the doctors’ open reassurance that anyone from home who had had to encounter what they had would have had similar problems. Yet even here, the soldiers’ testimonials of the good care they have received at Mason General seem promotional rather than truly honest.

We do see them, however, at work as artists, musicians, and mechanics (each to their own) as they attempt to reintegrate themselves into everyday life. These interchanges with reality and daily activities do seem genuinely to improve their well-being, at least in Huston’s insistent telling. 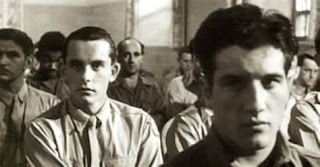 In short, despite the truth-telling the movie often engages in, we still recognize that this is somewhat a piece of post-war propaganda, a movie desperately attempting to tell us that these troubled men, who have suffered the deaths of those around them and the fear of their own demise can easily be reclaimed and brought back into the general society. Either such services are not successful today, or, perhaps, not as readily offered. But when we see those upon whom the movie as focused being joyfully bussed back to their homes, we also glimpse a fairly large group of others, waving them off, who apparently have not yet been able to recover from their traumas. And one cannot but help shed tears for those who are still left behind. Or even be assured that all those who have deemed to be recovered will not continue to wake up in the middle of the night in fear and terror and infect their family members and future children with some of those memories.
Despite Huston’s basically positive picture of their traumas, however, we cannot but doubt that these PTSD survivors will suffer some of their physiological horrors for the rest of their lives. If these men have come “to see light,” they may likely continue to see the darkness as well.
Evidently, the Army feared that as well, and refused to release this 1946 film until 1981, when it was shown at Cannes. Huston, himself, argued that the US government wanted every man who fought in World War II to be seen as “warriors” who came home even stronger than they had left—although it is apparent to everyone who sees this film and who has lived with a War survivor, it was not the truth. My own father’s basically right-wing politics and his homophobia are clear products of that war. My feeling has always been that as a handsome young air force bombardier, he had been approached by another young soldier and been terrified by the sexual complications, along with his own feelings. If, as Tom Brokaw has described these men, they represented “the greatest generation,’ they were among the most vulnerable, men who burrowed down into the society to which they returned to make life better, while sometimes never able again to ask themselves about their values, their relationships, and their own very palpable fears.
What is most truly remarkable in Huston’s film are the words these often shocked and confused young men honestly (and we presume without prompting) to speak for themselves. Their own inabilities to comprehend why they have come through in such bad shape speak volumes in a subtle youthful babble: “I was supposed to be the front leader when my buddy died, but I was behind him”; “when I first began to stutter everyone laughed at me,” and numerous other comments reveal just how their bodies and minds have closed down after what they had witnessed—and not just the horrors of war, but the stark differences between their upbringing and the world into which they had been so suddenly thrust. Even the strongest of them must have felt utterly confused, my father, a farm boy, among them. Is it any wonder that their ties with their squadron members and close compatriots were sometimes as binding as their relationships with their own families? They grew up and died with one another. Who else could comprehend that?