As one reviewer commented it is almost hard to believe that the new documentary Honeyland, set in a almost totally unpopulated Macedonian territory, is not a scripted film art-film. But when you realize that the filmmakers Ljubomir Stefany and Tamara Kotevska spent three years with their subjects, working in a hut without any indoor lighting in the house of a middle-aged women (Hatidze Muratova, who looks alas far older than her years) and her dying mother, Nazife, you begin to perceive that the golden tones you are witnessing are those of firelight, of natural lighting, and the landscape itself. 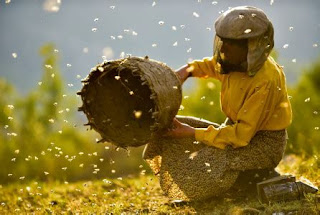 Much of the goldenness of this film has to do with the major activity of Hatidze, beekeeping. She attends to bees, always in natural locations (a hidden beehive high in a mountain pass, another in a local tree), the buzzing hives members almost seeming to recognize her gentle relationship with them: she takes, always, only half of their honey, leaving the rest for them to survive. Although she has a bit of smoke to protect herself, they never seem to bite her. Indeed, she, in her ochre blouse and deep green scarf, seems to take on all challenges with great aplomb, including the caregiving to her 85-year old mother, who can no larger even sit up. As her mother, herself, realizes: “I’m not dying, I’m just making your life misery.”

When she acquires enough of the precious honey, Hatidze bottles it, traveling by train to Skopje to sell the precious amber liquid, at a high enough price, evidently, that she and her mother can purchase what they need to survive on for several more months. Winter, when the bees grow dormant, represents a clearly difficult period for the couple, but during the spring, summer, and fall, this is truly a kind of honeyed-land. 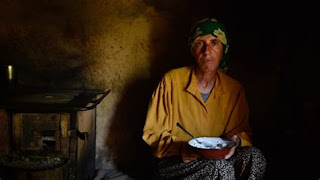 And it may have remained a land of “milk and honey” until the caravan of Turkish neighbors suddenly arrive, setting up camp next to her and her mother’s hut, with a passel of hungry children, a trailer truck, and an entire herd of scrawny cows.
You might have thought that the quiet and secluded Hatidze might have met their sudden intrusion with fury, but instead she greets them with friendship, even taking one of the neighbor Hussein’s young son into her confidence, explaining how to be an expert beekeeper by taking only half of everything they produce so that that they can survive as a colony. He is entranced by her gentle explanations and is almost ready to become the son she has never had.
But his inattentive father soon brings in dozens of beehive containers, delighted when he suddenly finds, after selling some of the honey, that he can now properly feed his voracious family. But soon after, egged-on by a city speculator, he becomes determined to produce an almost impossible amount of honey, obviously saving none for the bees themselves who bite him and several of his children, quickly moving on to kill Hatidze’s bees.
At one point, her new neighbor even cuts into a tree in which the bees have long inhabited, stealing some of the honey upon which Hatidze and her mother have counted to help support their meager lives. Without even having to speak, the film makes the dangers of inattention to nature and the greed of intruders in such a natural environment. I suspect that these filmmakers had not even imagined that their original movie about a sort of sacred creed with the natural world would turn into a moral lesson for those who have no respect for that world.
Although the Turk’s cows begin to calve, most of them die, which Hussein claims is due to the inattention of his wife but is more likely a problem of the lack of sufficient corn and other foods with which he feeds them. 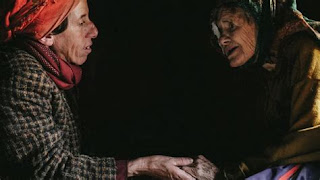 Meanwhile, Hatidze and her mother, without their major source of living, are forced to eat the Macedonian version of gruel, which Nazife refuses to swallow, throwing her bowl to the floor, which their dog happily laps up, while Hatidze, herself now near starvation, attempts to sweep up the remainder onto her own plate.

With the death of the neighbor’s cows, Hussein and his family quickly pack up and move on. But as winter settles into this outpost, Nazife also dies, and Hatidze is forced to bury her mother while, without obviously saying so, she is left with very little to eat. At one point we see her scooping up the snow for something to drink.
As spring slowly returns, we see Hatidze return to the high mountain retreat with which the movie begins. Her bees have come to life again, as she carefully removing only one honeycomb, while leaving the rest. She eats half, sharing the other with her pet dog. She will survive, we comprehend, better off alone, or at least without her uncaring neighbors.
This Macedonian film is clearly an unattended metaphor for our lives here in the US as well, except that it’s not the “outsiders” who threaten us as much as it is from those within our country. Bees are now dying throughout the world, and it is not only their honey that we are missing, but the flowers and other plants they pollinate.


Posted by greenintegerblog at 9:15 AM