My editorial assistant, Pablo Capra, grew up in Malibu near Topanga Canyon, so it might have been natural for him, I imagine, to grow up as a surfer; in truth, he tells me, he discovered one of his passions only in at the age of 20, after he had returned to the U.S. from a lengthy stay in Austria, the homeland of his father. His small press, Brass Tacks, primarily publishes works about and by Malibu figures, and one of his best-selling titles is a book on the surfing culture. It figured, accordingly, that among his friends was the model for the popular book and movie Gidget and all the Gidget Goes—fill in the blanks—that followed. Pablo often encounters her when he attends surfing events.
For several years now, I have been aware of the fact without thinking much of it. But just recently he mentioned to me something that took me a bit aback. Having read my piece about my early friendship with Isaac B. Singer, Pablo casually mentioned one day that Gidget—whose real name is Kathy—had also met Singer and cooked him a vegetarian meal. Her husband, Marvin Zuckerman, so Pablo told me, was a professor, a scholar of Yiddish, and had translated, with a friend, an older collection of somewhat raunchy Yiddish sayings, which they titled Yiddish Sayings Mamma Never Taught You. They’d already gotten a quote for the book’s cover by Henry Miller, and wanted one, as well, from Singer, since he was one of most well-known and last of the great Yiddish writers. Seeing that Singer had been invited to speak at a Ojai summer camp for Conservative Jewish college-age women, Zuckerman went to the leaders of the camp and got himself invited to the weekend events, where he chaired a panel on Yiddish poetry.
In Ojai he met Singer, gave him a copy of his Yiddish Sayings, and offered to drive the writer back to Los Angeles to the airport, on the way inviting him to lunch at the Zuckermans’ Pacific Palisades home. He called his wife, Kathy, who invited her own and Marvin’s parents to join them as well.
The event, so I have since read, was a joyful one, if not terribly eventful; but it did lead to Singer composing a short comment for the cover of their book and resulted in the elderly author reading the Gidget novel, writing back that he thought it was a far better novel than Nabokov’s Lolita.
But before I even read about their encounter in an article by Zuckerman, I was astounded by the very idea of Singer meeting the original Gidget, a kind of absurdist collision, it appeared to me, of high and low culture, of old world wisdom crashing against the rocks of American pop. Of course, I had not really bothered to reckon with the fact that Gidget was no longer a boy-loving teenager but was now a handsome woman, a few years older than me. Amused by my reaction, Pablo brought me a copy of the original novel, signed “Surf On! Love Kathy Gidget Kohner,” the cover announcing not only that the book was written by Kathy’s father, Frederick Kohner, but that it now contained a forward by Kathy Kohner Zuckerman. The back cover described the story as being about “a girl’s coming-of-age in the summer of 1957” (one of my very favorite childhood years) and suggested that Gidget (named Franzie in the novel) was “part Holden Caulfield, part Lolita.” I now had to read it.
So between studying the two tomes on the monstrous Holocaust murderer, Adolf Eichmann, discussed in “Opposing Banality” in this year’s volume, I quickly devoured the rather charming, semi-biographical story of young Kathy falling in love with surfing and the boys who somewhat reluctantly taught her. Frederick Kohner, a screenwriter, is no J. D. Salinger, just as his Gidget is no Holden Caulfield. Although told in a vernacular first person, Gidget’s tale reveals that as much as she may have felt like an outsider, she nevertheless wanted very much to be part of the culture around her, one slightly less worldly than the life of her own parents, Jewish Czech émigrés, represented. Even less happens in the novel—at least until the last scene—than in the movie, perhaps, in part, because her father wasn’t able to successfully describe the process of learning how to surf, a central feature of the Gidget franchise. Franzie tells terrible whoppers to her parents in order to sneak out each day to the beach, gets “lousy tonsillitis,”  falls “desperately” in love with Moondoggie (who in real life, it turns out, was our artist friend, Billy Al Bengston), and, in an attempt to make Moondoggie jealous, hangs out in the older “great Kahoona’s” hut. Uninvited, Gidget nonetheless attends an evening celebration described by some of her friends as an “orgy”—a word she doesn’t know the meaning of—which goes awry when several of the celebrants take torches in hand for a midnight surf and accidently start a canyon fire that threatens disaster akin to the Malibu fires of 1956 and 1958 (there were also big fires in 1970 and 1982, and in the worst fire of 1993, my friend Jerome Lawrence, who lived a short distance from the beach on Las Flores canyon, lost his beautiful canyon home and all his theatrical memorabilia). The day is saved in the fiction by a miraculous downpour of rain that immediately puts out the flames! The novel ends, accordingly, with Gidget almost becoming involved in a calamity and, later, being the cause of an intense fight between the great Kahoona and Moondoggie. Either event might have landed her and others in jail. 1957, however, was a far different time than the one in which we now exist. Despite her scrapes with danger, Gidget remains as virtuous and innocent as the “nice” tom-girl portrayed by Sandra Dee a short while later. 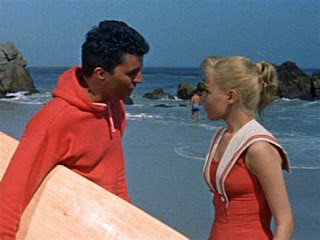 The movie script by Gabrielle Upton (Gillian Houghton) understandably ditches the heavy drama of the fire, focusing instead on Francie’s (the name the movie gives to Sandra Dee) attempts to make Moondoggie (James Darren) jealous, with the younger surfer fighting the Kahoona, while simultaneously becoming aware that his hero is not someone who truly deserves to be admired. Ironically, the two teenagers later meet up through parental connections, and fall in love all over again, while discovering that Kahoona is a kind of fraud, who now will work in the off-season as a pilot instead of traveling off to Hawaii or Peru as his legend has it. Cliff Robertson as the Kahoona, in fact, saves this film from its juvenile sentimentality by hinting at far darker aspects of life. A loner who parades as a hero before teenage boys, the “big” Kahoona (he is no longer referred to as “great” in the film version) obviously gets his kicks out of serving as friend-cum-father to these surfers who obviously feel out-of-sync with the rest of their lives.

The movie, moreover, unlike the book, actually attempts to explain surfing by showing the rush Gidget gets from the sport. The long shots (with veteran surfers such as Miki Dora and Mickey Munoz) of the surfers against the waves—as opposed to the cheesy closeups in which the cast is required to pose in silly grins with arms spread out pretending to balance against a backscreen—truly do reveal the art of the sport played out in the natural beauty of its arena. There are moments when the ocean of Southern California really does look like the paradise it always promised visitors to become.

In the novel, the fire required the Kahoona to forever abandon his hut; and in real life, the publication of the novel and opening of the motion picture made the sport so popular that today, so I am told by Pablo, the year-round surfers openly resent the hundreds of their fellow kind, somewhat nostalgically imagining the pre-Gidget days. By the time you read this, I will have likely lived up to my promise to spend a few hours at the beach to watch Pablo “shoot the curl.”

As I read this short novel, moreover, I also quickly began to perceive that Kathy Kohner, growing up as the “girl midget,” was also a member of Hollywood royalty. Her father had received an Oscar nomination for his 1938 screenplay of Mad About Music, and wrote several other screenplays, including an adaptation of Knut Hamsun’s fiction Victoria (which would surely have interested Singer). Her uncle, Paul, worked in the 1930s as head of the Universal Studios European division, and in 1938 founded one of the most important Hollywood agencies, representing figures such as Marlene Dietrich, Billy Wilder, Greta Garbo, David Niven, Ingmar Bergman, Maurice Chevalier, and Lana Turner. My dear friend, Ken Sherman, worked for Kohner until the great man’s death in 1988, when Sherman founded his own organization, representing Woody Allen and others. Paul Kohner’s daughter, Kathy’s cousin Susan, acted—preposterously as a light-skinned Black girl—in Douglas Sirk’s famed Lana Turner vehicle Imitation of Life. Susan’s sons, Chris and Paul Weitz, in turn, produced American Pie and About a Boy, and acted together in one of my favorites, Chuck & Buck. Paul also wrote and directed In Good Company, American Dreamz, and other works. I write of Imitation of Life and Paul Weitz’s interview of his mother at The Academy of Motion Picture Arts & Sciences’ Samuel Goldwyn Theatre in My Year 2009.
It gradually became clear that it wasn’t at all so strange that Singer and Gidget had met. My own friendship with him, as the result of a course at the University of Wisconsin, was far more odd, even though I had read most of his writing at the time of the course and we shared a deep admiration for the writing of Knut Hamsun (despite the abhorrence of Hamsun’s political views).

Posted by greenintegerblog at 10:01 AM