guys and dolls
by Douglas Messerli

Pedro Almodóvar’s 2002 film, Talk to Her, is a work of subterfuge, a film pretending to be about one thing while actually being about many other things. We’ll begin with the two male figures, Benigno Martín (Javier Cámara) and Marco Zuluaga (Darío Grandinetti) who first encounter one another at a performance of Pina Bausch’s dance number Café Müller, in which two women mirroring each other crash into the walls, one of them finally losing control, as she cascades into rows of chairs which a male dancer attempts to quickly move out of her way.
In a sense it is a kind of metaphor for both the destroyed women in Almodóvar’s film with Benigno serving as the male who attempts to make things easier for the berserk female dancer. In this early scene Benigno observes the man next to him, Marco, crying with tears of empathy for the women whose lives have obviously been destroyed. 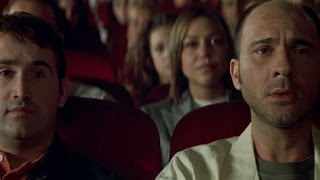 Benigno, it turns out is a male nurse and beautician, caring for a dancer whom he has obsessively watched in her dance studio through his window while he was caring for his dying mother. By accident he is assigned the same young dancer, Alicia Roncero (Leonor Watling) after she has fallen into a coma, from which she is unlikely to come out of, since she has been hit by a car. 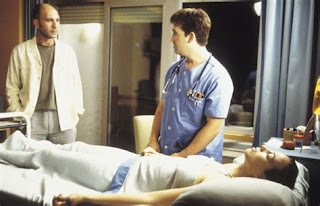 It is clear that Benigno has had very little experience with women sexually, and he seems almost like a shy but curious boy who first actually meets Alicia after she drops her wallet. He retrieves it and gives it back to her, but in the process notices that she lives in an apartment building where her father is a psychiatrist, with whom he quickly makes an appointment in order to get closer to Alicia. At the first meeting with her father, he sneaks into another room, stealing a hair clip belonging to Alicia. But the two, Benigno and Alicia, do soon begin meeting, finding a mutual interest in dance and silent films.
In caring for her in the hospital it soon becomes apparent that he is a more than excellent nurse, cleaning her, doing her hair and her nails, and most importantly, talking to her as if she were still coherent. Her father, accordingly, after asking about Benigno’s sexuality—perhaps simply to protect his job, the young man responds that he is gay—hires Benigno as her personal caretaker, a role which he lovingly embraces, often spending nights as well as daylight hours with her.
The second male, Marco, a journalist, gets himself assigned to interview the famous female bullfighter, Lydia González (Rosario Flores); she meets with him but grows suspicious when he admits to having very little knowledge about her art, and demands he leave her off at her home. As he begins to drive away he hears her scream and stops his car. She runs to him, telling Marco that she has found a snake in her kitchen, which, open entering her house, he quickly kills.

Despite all of her fearlessness in the ring she his terrified of snakes and refuses to even return to her house. A relationship does also rise between the two of them, and it appears that, having been left by her former boyfriend, Niño de Valencia (Adolfo Fernández), also a bullfighter, she and Marco may develop a relationship. She has something to tell him, she reports, but not until she has finished the day with her bulls.

During one of the fights, a bull suddenly gores her, and she also falls into a coma, from which the doctor suggests it is unlikely she will awaken.
It is here, at the hospital, that Benigno again encounters Marco, he attempting to help the bereaved male deal with Lydia’s condition; he needs to “talk to her,” he assures him.
So it appears two straight men are caring for woman they hardly know, obsessed with them, and, as critic Robert Ebert perceptively adds: “Almodóvar treads a very delicate path here. He accepts the obsessions of the two men, and respects them, but as a director whose films have always revealed a familiarity with the stranger possibilities of human sexual expression, he hints, too, that there is something a little creepy about their devotion.” Clearly these two men are not only obsessed but are treating these unaware women to the male gaze, to voyeurism, and possibly even sexual abuse, a situation we have to deal with when it becomes apparent that Alicia misses her period and is found to be pregnant. 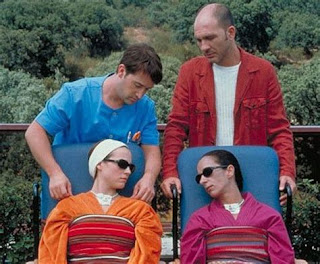 Yet this is not simply a kind of soap opera concerning another series of incidents of patronymic behavior. For these two empathetic males, although in control of the situation, are actually under the thrall of these two females. I would argue that in real life, both are slightly terrified of women, and in that sense, despite their lack of recognition, they are gay. Women are only available for them when they no longer exist as living, acting beings, as sexual toys, in a sense, who can no longer speak back to them, challenge them, question their male sexuality.
Despite the critical agreement that this is the director’s most sexually normative film, I’d argue it one of his most explorative films into what sexuality truly amounts to.
These two men are brothers not just in their fears and inexperience with women, but they play the traditionally feminine roles, while their would-be lovers are the dominating forces in their lives. Benigno is clearly a mamma’s boy who doesn’t quite even comprehend what a woman is about. Alicia is no more than an inflatable sex doll for him, not a true woman. He is the caretaker here, the one who can make women beautiful out of some idealized vision of them. Marco is a fragile male who is attracted more to Lydia’s masculine characteristics, her ability to fiercely stare down running bulls, than to her feminity.
What Almadóvar is suggesting, of course, is that all of our cultural notions of what males and females are utterly pointless. These are not straight males or women for that matter (Alicia, for example, has been carefully taken under the wing of her teacher, Katerina Bilova (Geraldine Chaplin), hinting at a possible lesbian relationship, while Lydia has taken up the most macho role in Spanish culture; the only thing she fears are snakes. Freud might easily be able to tell us why.
Benigno is sent to jail for his presumed perversity, and ultimately commits suicide, perhaps at the very moment when Alicia comes out of her coma when she produces a stillborn. With Lydia’s death Marco no longer has a subject about whom he might write—except perhaps for his strange friendship with Benigno.


Posted by greenintegerblog at 9:31 AM