that childhood car
by Douglas Messerli

Clint Eastwood’s Mystic River which, years after its original release, I saw for the first time the other day, is a complex movie based on a kind of standard trope: three young boys, close friends in a Boston neighborhood, grow up to become social and moral opponents in the lives as adults. It happens all the time, or, at least, so testosterone-driven male directors would like you to believe: not only Eastwood, but Martin Scorsese, even the melodramatist Douglas Sirk have all done variations of this theme. 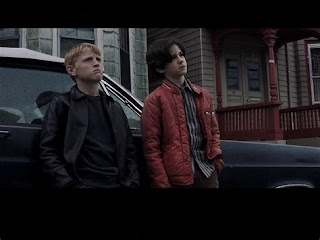 Yet this film is far more complex than most such films. After all, the young boys involved, Jimmy Markum, Sean Devine, and Dave Boyle, seen playing street hockey in an early scene, behaving somewhat badly as they attempt to write their names in freshly poured sidewalk concrete, are suddenly accosted by a man pretending to be a police officer, who demands their names and home locations before pulling away, quite inexplicably, with Dave, demanding him to enter a car wherein sits a priest—the two of them abducting the boy for 4 days while continuously sexually attacking him—abuse is too kind of a word in this case of utter rape and sexual battery! That the male “tough” behaving Eastwood would even dare to take on this subject is quite amazing. But then this diehard Republican apologist has always been a rather surprising figure in the celebrity and film world. 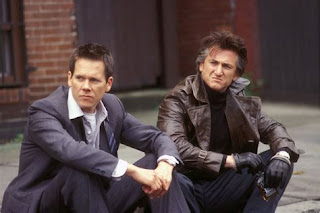 Pulled out of his natural social community, Dave almost immediately loses contact with the world he has known, and as an adult, (performed by Tim Robbins), he remains an outsider—a person who as the simple representation of the death of his youth is shown through the closure of a window blind—remains haunted by his abduction. Not that his childhood friend Jimmy (Sean Penn) is much better off; he, now an ex-con, runs a local popular neighborhood grocery and liquor store, where he is still close in touch with Dave. Not only that, but by marriage, the two are still related.

Actually, the two former boyhood friends are also related by their manias and sense of violence. Jimmy is obsessed with the fact that his 19-year old daughter Katie (Emily Rossum) is dating a boy, Brendan Harris (Tom Guiry) whom he despises, for reasons that are not immediately revealed. But the very fact that he is still attempting to control a 19-year old child speaks a great deal about his macho persona. Certainly his wife,  Annabeth (Laura Linney) is not happy in their relationship.
In fact, women in this drama are nearly deleted, including Celeste (Marcia Gay Harden), Dave’s wife, who suddenly is intimidated to help her husband to “clean-up” after a mysterious event where he claims he was forced to kill someone who accosted him.
The same night Jimmy’s daughter Katie is brutally murdered, her body left mutualized after Dave has witnessed her in a local bar with her girlfriends.
The plot of this mystery/murder film gets even more complicated when the third childhood friend, Sean (Kevin Bacon), now a police detective becomes involved in the search for Katie’s murderer.
In a sense, the different directions of these three boyhood friends now reveal their extreme differences, as Dave begins to suspect Jimmy’s involvement in his daughter’s death, while Sean, with careful deliberation, attempts to track down the murder (ers). 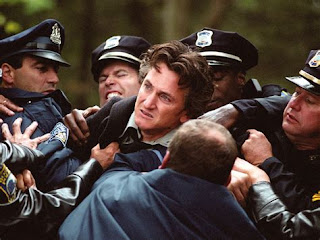 The fact that the hot-headed Jimmy becomes increasingly convinced that Dave has destroyed his daughter, represents not only his mania but his guilt for not being the one who was enticed into the childhood car.

It is as if all three boys were terribly abused that day so long ago, and none of them can let it go. At least Sean, with his partner, Detective Sergeant Whitey Powers (Laurence Fishburne) work together to track down the true killers; yet Sean’s own wife, pregnant at the time, has left him, so we must recognize him as another failed lover, another destroyed member of this trio.
Convinced of Dave’s guilt, Jimmy corners him and demands an admission of his activities. Hoping to free himself of his certain death, Dave admits to the murder—despite the fact that the man he has murdered was another child abuser, whom he had discovered in a car with a child. Yet Jimmy, convinced of his righteous revenge shoots the former friend in the head, releasing the body in the Mystic River of the title. In a sense, it is a revenge for his own lack of courage all those years earlier, a cleansing of his own guilt for not speaking out for his friend those long years ago, for not being the child the two villains chose.
Finally, Sean reveals they have uncovered the real killers, two kids, one of whom was the son of the notorious “Just Ray” Harris,” the man who sent Jimmy to jail and the father of his daughter’s boyfriend. As I told you this was a very complex story.
I might argue that Eastwood and his screenplay writer, Brian Helgeland, might have simplified their story, based on the novel by Dennis Lehane. But, obviously, that was just the point: the interconnected stories of these young men are just part of the impossibly tortured tales of young men and women growing up in what Eastland shows as an almost sour sewer of the Mystic River flowing through Boston, which we later discover in works such as in Tim McCarthy’s Spotlight. That great Brahmin world of high ideals was never what it pretended to be.
The children in Eastwood’s movies were just those kind of abused kids, who never quite recovered from their sudden abuses on the streets in which they were simply playing hockey and memorializing their names into the local pavement. They were innocents suddenly put into another world apart from their imaginations. Can you blame them for being failures as adults?