Quentin Tarantino | Once Upon a Time...In Hollywood

My husband Howard had to do some insistent coaxing to get me to see Quentin Tarantino’s film Once Upon a Time…In Hollywood; although I’d seen a number of his films previously, I’ve never been a great admirer of his bad-boy macho heroes who spend a great deal of time on screen torturing, murdering, and quite literally torching anyone who they don’t much like. 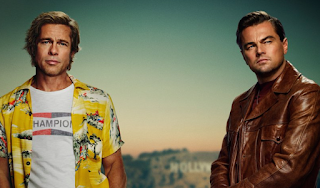 Yet, I am quite happy that Howard insisted, this time round, and I agreed. Once Upon a Time is also quite violent at moments, but is also a paean to the “golden” days of Hollywood, even while the “hero” of the movie, Rick Dalton (Leonardo DiCaprio), lives next door to Sharon Tate (Margot Robbie) and Roman Polanski, celebrating with her hairstylist Jay Sebring (Emile Hirsch) and the heiress Abigail Folger (Samantha Robinson), all of whom, in real life, were killed by members of Charles Manson’s clan on the night in which the movie ends on August 8-9, 1969, which Tarantino hints brought an end to that golden/hippy era.

Most of the movie attempts to recreate what it was in those days, diving into the legendary Muso and Frank Restaurant, famed drive-in movies, studio shooting sites, the popular El Coyote restaurant near where Howard and I live (one of the very worst restaurants in which I’ve even eaten), and other popular venues, such as the Playboy Mansion and the Westwood movie theater in which Tate’s absurd film, The Wrecking Crew, was showing, as well as, most importantly the Spahn Ranch in Chatsworth, where Dalton had previously filmed many of his sessions of his popular series Bounty Law, and which the Manson clan have now taken over, much to the stoic reaction of Cliff Booth, Dalton’s loyal stunt-double, as he challenges their right to be there, seeking out his former director friend George Spahn (Bruce Dern).
But the true focus of this meandering film, fortunately, is not on the terrifying Manson group (showing up in one sequence in full force a bit like a terrifying clan out of a science fiction film), but upon the bromance between Dalton and his stunt-man, Cliff Booth (wonderfully performed by Brad Pitt), who drives the now declining actor Dalton throughout the magical city in a way that you can only wonder what their relationship really is, a close friendship, maybe a little less than a marriage, but clearly something which in Hollywood doesn’t much get talked about. 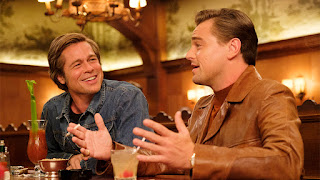 The more than average well-written essay on Wikipedia declares that Booth’s and Dalton’s relationship was “inspired” by a vast array of actors who, after becoming famous for their films, quickly lost their mojo as the 60s, and moved forward into new territory: including Burt Reynolds (who would have been in this film had he not died shortly before filming), and who had a close relationship with his stunt-double, the role Cliff Booth plays. In our early days of living in Los Angeles, all of the gay producers we met proclaimed that Reynolds, who openly toyed on film with the idea of being open to male/male relationships, was dying of AIDS. He wasn’t, but I think his image of a macho man who also eyed his fellow actors for their beauty, made him open to such speculations. Other “influences” include Ty Hardin, George Maharis, Edd Byrnes, Tab Hunter, Vince Edwards, and Fabian Forte, most of these figures who were known to be gay or at least rumored to be. This is clearly no accident—there are never real “accidents” in Tarantino’s films—and the relationship between the violently macho Booth and Dalton is nearly inexplicable if there isn’t a sexual frisson between them. It is even suggested that Booth killed his wife, although we’re never given a full explanation of why and how he escaped arrest.

But his friendship with Dalton is clearly deeper than what he might have recognized in any connubial relationships the two may have had. The two not only drive together around town, often sleep in the same rooms, and drink together, even after Dalton marries an Italian hottie, preferring his stuntman’s company to hers. If these two men never have sex, it’s quite apparent that, as somewhat mirror-images of one another, they’re in love. Fortunately Dalton’s new wife, after his last round of film-making in Italian Spaghetti Westerns, is a kind of narcoleptic figure who, even after their house is attacked by the Manson group, takes enough sleeping-pills to keep her quiet and out of the picture.
I have now given away, of course, something that Tarantino begged critics not to reveal at his movie’s Cannes showing. Spoiler alert: Tarantino, as usual, despite his careful study of the time and events, loves to re-bend history. As in his film Inglorious Basterds this director warps time in order to reclaim the horrors of our history. Hitler is destroyed long before he actually was. And instead of  the horrific stabbing and killing of Sharon Tate and her friends at their 10500 Cielo Drive address, the confused Manson gang attempts to kill Booth and Dalton, after a night where Booth has smoked an acid-laced cigarette and Dalton is cooling out in his pool.
Yes, there is more Tarantino violence, some of it almost unbearable to watch, but these are, after all, monsters who deserved to be destroyed, even by a huge flame-thrower towed out of Dalton’s garage. It’s hard to feel sorry for the Manson murderers’ death, or even more Hitler and his associates’ inferno in a movie-theater.
In Tarantino’s films history is never dead, but gets replayed, re-perceived, and completely altered. He gives us an alternative history we might better endure. But, as our current President keeps shouting, it is truly false history. Even if we might love it, it “ain’t the facts jack.” And there is something dangerous in its myths. Booth, wheeled off in an ambulance, is a false hero, despite the former Viet Nam survivor he might have been, a figure only in the fictions of film mythology which Tarantino so loves. The question this director never truly confronts is the reality we all need to face.
The Manson monsters were not stopped. They killed actually many more people. Dictators and blindly selfish leaders are not killed before their time. Trump still lives, and so too Vladimir Putin, Kim Jo-Un, Rodrigo Duterte, Jair Bolsonaro, and so many others. Tarantino’s works are wonderfully quirky myths that, alas, do not satisfy my reality.

Posted by greenintegerblog at 6:45 AM