Almost every time I watch another Rainer Werner Fassbinder—and there are now very few I haven’t seen—I feel this one was his most brilliant. That’s a strange thing to say, I know, about a director who gave us so many difficult, not easy to assimilate dramas. But yet, as I’ve gradually moved through Fassbinder’s oeuvre, that’s how I feel, each new film giving me more pleasure than the past, without reducing any of other previous films in the least. I don’t like the idea of rating filmmakers, for me each of who present their own delights, but I have to admit that right now he is one of my very favorites, up there with Robert Bresson, Andrei Tarkovsky, Alfred Hitchcock, Ingmar Bergman, Alain Resnais, and so many others whom I’ve so long admired.
If the television series I just watched, Eight Hours Don't Make a Day, delivered in 5 powerful episodes, is not his “best” film, it might certainly be described as a sort of map to all of his other films.
I was fairly startled to read other critics describing this, more comedic and family-resolved film, as a break from Fassbinder’s far more serious and despairing films of the past and future. Again—and this often happens—I must ask what drug they’d been on?
The New York Times reviewer, for example, wrote: 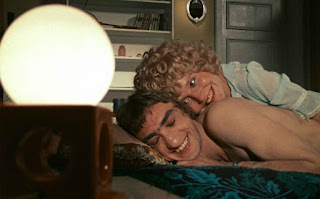 Anyone familiar with the doomed fruit seller of Mr. Fassbinder’s “The Merchant of Four Seasons,” the luckless lottery winner of his “Fox and His Friends,” or the Weimar-era ne’er-do-well hero of his “Berlin Alexanderplatz” (with Mr. John as a villain as treacherous as Jochen is good-hearted) is forgiven for expecting the worst. While few characters in “Eight Hours” wind up dead or humiliated, it’s not as if Mr. Fassbinder’s bleak worldview has entirely gone away.
According to some sources, the last two episodes that Fassbinder planned of his original 7-episode long TV film, were about to lower the boom on this mini-TV series, subtitled a “family series,” before its producer Westdeutscher Rundfunk (WDR), suspended funding. Yes, I’d love to have seen all 7 episodes, but I do feel that, in a true sense, all of his works are at heart comical versions of life and death in the Post-War West German world.
Actually, I’ve felt that even in his other films and many another seemingly brutal presentation of post-War German reality such as Fassbinder’s rather shocking Why Does Herr R. Run Amok? in which the husband Herr R. is gradually erased from the life of his family until he finally, like a revengeful elephant, does go “amok,” killing his wife’s absurd friend, his wife Lilith, and their son before hanging himself. This film ends tragically, but it begins comically, in fact, with the telling of three stale jokes. And I likened it, somewhat, to one of Joe Orton’s dark comedies.
Similarly, here’s what I wrote about one of Fassbinder’s very darkest works, In a Year with 13 Moons, wherein the transgender Elvira tracks down the successful business-man Saitz, for whom she has made the sexual transformation, all to no avail:

At first it appears that, without one of the codes, Elvira will be refused entry [to his offices]. Yet she finally does make a guess, horrible reminder that it is: Bergen-Belsen, the A-pass. And she enters. When she is shown into a room with several men within, she turns to ask the now-genial chauffeur, which one is Saitz. The irony is earth-shattering; after changing his-her entire being and life for the man, she cannot now even recognize him.

When told that he is the thin man in tight tennis shorts, she is forced to watch an even more grotesquely comic manifestation of power. While a Jerry Lewis/Dean Martin movie, You're Never Too Young, plays upon a television, Anton forces his male staff to reenact parts of the tennis court scene, a piece filled, in the original, with a chorus of marching cheerleaders led by the singing duo. Elvira joins in. Their performance is hilarious, but also mad. There is not even evil here. Reality is too strange for that.

Tragic yes, but ridiculously comic as well. In every single movie I’ve seen, Fassbinder interweaves the comic, campy melodramatic scenes, and just pure theatrical absurdity with his often violent and tragic stories. So why were critics such Ben Kenigsberg from The New York Times so surprised that his TV series, Eight Hours Don’t Make a Day, devoted to family life, should not have some of the same elements. 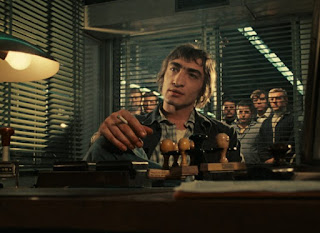 There is, in fact, a kind of madness in this film throughout. The major figure Jochen Epp (the wonderfully evil character of Fassbinder’s greatest television work, Berlin Alexanderplatz, Gottfried John), here an affable working man, meets his soon-to-be lover and wife on a trip to an automat to buy more schnapps for his kitchen-guzzling grandmother, Oma Krüger (Luise Ulrich). Marion Andreas (the heavenly Hanna Schygulla) is also there, so furiously determined to buy a jar of pickles—kicking and pounding the machine for its inability to deliver up a jar of them that Jochen imagines that she must be pregnant, desperate for the taste.

Marion is not, in fact, pregnant, although she is living with a successful young white-collar worker (an important distinction in this film), Peter (Ulli Lommel), basically a loving and caring partner, whom she immediately ditches for the more confused and far-less successful blue-collar worker who spends his days making inexplicable tools, whose purpose is never explained. 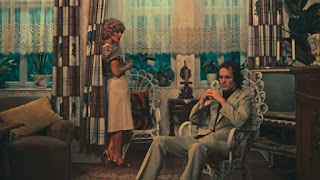 And why shouldn’t he be a bit languid and confused, living as he does with a conservative argumentative father, Wolf (Wolfried Lier) and a lovely but far too-complaisant and brow-beaten mother Käthe (Anita Bucher), as well as the amazingly independent grandmother Oma, with regular visits from the even more disapproving, slightly evil aunt Klara (Christine Oesterlein), the truly obnoxious brother-in-law Harald (Kurt Raab) and Harald’s tortured wife Monika (Renate Roland) and their daughter. Harald believes in “tough” love for his children, which consists of basically torturing his child to make her stronger, a theme which is expressed again and again throughout this series. It is, as Marion later admits, a very “odd” family, one into which no one might want to marry.
But then, Marion’s own mother (Brigitte Mira), flies into the picture, a bit like a bat-out-of-hell, curtailing any plans Jochen might have had to spend a full weekend in bed with his new girlfriend. Besides, she has a charming but somewhat intrusive brother who lives with her, who wakes them early and is perfectly willing to jump into bed with them to interrupt whatever love-making activity they may have imagined. Another odd family indeed.
Beyond that, there are Jocken’s working brothers, who must fight the plant administration to get one of their own, Franz (Wolfgang Schenck) as their new foreman. And Marion, who works as a newspaper receiver for “personals,” including sexual correspondences, along with another conservative and disapproving woman Irmgard Erlkönig (Irm Hermann). In short, the “families” in this film grow larger and larger and more strange by the moment.
Yet, quite amazingly, two figures stand out in their attempts to navigate these rocky relationships and to offer new possibilities to everyone: Oma and Marion, who quickly bond and are certainly of the same spirit. Oma also wants out of the tight family circle, and quite literally “picks up” the gentle and passive Gregor Mack (Werner Finck). Their search for an affordable apartment away from the argumentative battles of her son Wolf, lead to the discovery of a closing-down library, which they quietly usurp, turning it into a day school for kindergarten children, involving both Wolf’s daughter and Marion’s son. They are perfect for the task, and the second episode of this TV series, which features their illegal takeover of government property is one of the very best of the movie.
And Oma, throughout, is the one to whom everyone turns for answers to dilemmas in their lives, and she, sometimes mistakenly, often crazily, but for the most part successful, creates solutions to impossible problems, including their housing difficulties, their impasse with the local government for taking over the library, and Monika’s divorce from Harald. Oma is the impervious optimist, determined to take over the most difficult issues in this family-friendly film.
Oma is an older Marion, as the loving partner of Jochen proves time and again, solving union problems, helping her sister-in-law Monika in her times of need, and giving her utter support to her now-husband, Jocken, while even offering her office-mate Irmgard new possibilities in her life. 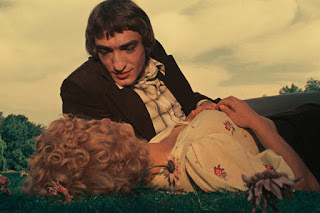 Perhaps the most lovely scene of this film—a work unimaginable on US television sets even today—is Fassbinder’s filming of Jocken and Marion’s wedding scene, which, with hand-held camera takes us through a dizzying tour of white and blue collar workers, elderly and disapproving elders, and the loving and caring quartet—Oma, Jocken, Marion, and Monika—with nearly everyone totally drunk, spinning nearly out of control into a new world of possibilities.
Except for John Waters’ more raunchy celebration in his Pecker, there has perhaps been no more wonderful party ever portrayed on screen. In this stumbling event nearly everything gets up-righted: Monika is granted by her husband a divorce and the possession of her daughter, Irmgard finds new love, Monika and the plant worker who, given his tenderness in the very first episode with her daughter, perceives that he was the right man for her all along. Oma even puts her hand in that affair later allowing the two to express their love for one other.
I certainly can imagine the difficulties this couple might have experienced in those missing two episodes. Company openness to new ideas such as those with Jocken and Marion express can only go so far. The smoldering hatred of Wolf might eventually ignite a hostility between him and his wife and family. And Harald’s misogynistic view of the world might be expressed in new variations. The government might certainly determine to close down Oma’s and Gregor’s grand kindergarten project. And, as every male in Jocken’s factory proclaim, life after marriage isn’t the same.
Perhaps WDR was right to pull those last two episodes—although I’d loved to have seen them.
What this series reveals is that Fassbinder’s works were always devoted to family life, however one might define that. His views of families, lovers and friends, working partners, elderly women and their younger male lovers, secretive sexual events with sons and daughters, all are reiterated again and again in the manner in which he worked with his close-knit casts, a larger family of sorts, including his own mother, who also appears in this series, Lilo Pempeit. In that sense, Fassbinder knew well, you could kill off friends and family members in their fictional reincarnations, but they always must return to play out their lives and haunt you to the end of time.


Posted by greenintegerblog at 10:30 AM