Sam Ashby | The Colour of His Hair

a refusal to forget
by Douglas Messerli

British designer and filmmaker Sam Ashby’s 2018 film The Colour of His Hair is a montage of a drama and documentary, based on Elizabeth Montagu’s un-produced 1964 script about homosexuality in England, originally written for The Homosexual Law Reform Society, but, for financial reasons, never filmed, a work based, in part, on her half-brother Edward’s 1954 arrest and imprisonment for homosexuality, a charge he continued to deny despite the fact that the two other defendants in the trial pleaded guilty. Yet his imprisonment for the Buggery Act of 1533 led to a public outcry among both politicians and church leaders, who set up the Wolfenden Committee, whose 1957 report argued for the decriminalization of homosexual acts between to adults. Ten long years later, the British Parliament accepted their recommendation and homosexuality in Britain became legal.
As Montagu himself wrote after that decision:

In the cold war atmosphere of the 1950s, when witch hunts later called
the Lavender Scare were ruining the lives of many gay men and
lesbian women in the United States, the parallel political
atmosphere in Britain was virulently anti-homosexual. The then
Home Secretary, Sir David Maxwell Fyfe, had promised "a new drive
against male vice" that would" rid England of this plague." As many as
1,000 men were locked up in Britain's prisons every year amid
a widespread police clampdown on homosexual offences.
Undercover officers acting as "agents provocateurs" would pose
as gay men soliciting in public places. The prevailing mood was one
of barely concealed paranoia. 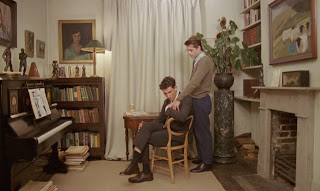 Ashby, after a rather long written textual introduction to these events, takes simply one of the scenes from Elizabeth Montagu’s early script, acted by Josh O’Connor and Sean Hart, in which the couple are “rolled,” (“rolling the queers”) a process of sending threatening messages, clippings and other materials to gays that represented a half threat and half blackmail process, often resulting in police visits, which the police often simply presented as needs for advice, in this case one of the two, a doctor, being called to the police station over an apparent gay suicide.

The director purposely uses Montagu’s two handsome white male professional figures, as he puts it, then “the only acceptable face of homosexuality,” alternating their inconclusive story against a backdrop of seemingly documentary interviews—filmed in black-and-white—and visits to the Lesbian and Gay Archive, as well as the Lesbian and Gay News Media Archive, and The Hall-Carpenter collection, briefly displaying their large collections of buttons, Gay and Lesbian T-shirts, gay pornographic photographs, magazines, and clippings saved from newspapers of the era. These round out the story of the film’s two major figures so that we can contextualize their fears and horrors, as they attempt to determine who their blackmailer might me and whether or not they should take the matter to the police, all the time knowing that for government officials their was utterly no distinction between the criminal actions of the blackmailer and their own discreet sexual behavior. 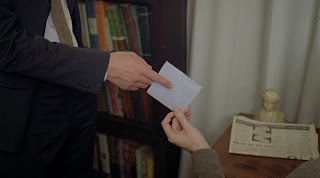 Even when I first came out in the US in the late 1960s bars were still being raided, and policemen often posed as gay figures in the wildly open bathrooms in Grand Central Station and in Central Park. I was lucky. I was never arrested, but hundreds of others were. And I might have been, although probably unlike England I would never have been long imprisoned, just fined or revealed to family and friends. Howard and I did that ourselves soon after.

Ashby, aware that these remarkable archives were all materials that lesbian and gay individuals donated, do not quite testify to all those others who were not openly queer and, accordingly, go not, perhaps, properly represent that brutal time in British (and US) history when fear stalked every individual who did not fit the sexual norm.
The title, based on a poet by A.E. Housman says it all:

Oh who is that young sinner with the handcuffs on his wrists?
And what has he been after, that they groan and shake their fists?
And wherefore is he wearing such a conscience-stricken air?
Oh they’re taking him to prison for the colour of his hair.

'Tis a shame to human nature, such a head of hair as his;
In the good old time 'twas hanging for the colour that it is;
Though hanging isn't bad enough and flaying would be fair
For the nameless and abominable colour of his hair.

Natural hair color, of course, is not something one can permanently change, just as is sexuality.

Ashby’s film offers no solutions to these atrocities or answers for the past, but does provide a sort of history which, in these days of some more tolerant behavior to the LBGT community, they may have begun to forget. As he has suggested:

I see the film as an experiment in thinking through archives, and in some ways as a warning, too. I think that since the introduction of gay marriage in many western countries over the past decade, a lot of gay people started to feel that the fight had been won. But with the recent gay purge in Chechnya and the rise of Trump, it is becoming clear just how fragile this state of acceptance is. By marking this anniversary, we are saying that things have clearly improved a lot, but I want to highlight what is still to be done.

Posted by greenintegerblog at 11:03 AM