a lost man
by Douglas Messerli

I don’t believe the easy myths of the 1950s. Yes, the post-World War II culture in the US did, in fact, retreat to a kind of paternalistically controlled society, particularly in the American small towns and rural areas, forcing women to play out a diminutive role in their marital relationships: the home-keeper, baby-producing, household objects for their often equally unhappy husbands who rushed off to often even less satisfying worlds to obtain their dominate roles to simply make money to support their expanding families. Leonard Bernstein’s short opera Trouble in Tahiti captures it brilliantly. 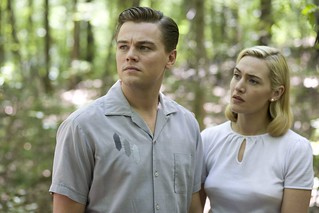 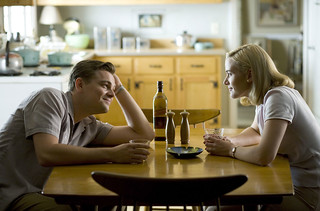 I grew up in that decade, and saw through the eyes of a child, my mother and father suffer because of its comprehension of sexual possibilities. I do believe growing up in the 1950s probably made me perceive, unwittingly, that I could never survive in such a world, just as the character in this Sam Mendes’ movie, John Givings, Jr. (Michael Shannon) has been made to perceive in Revolutionary Road that he is insane, and for the society to remain safe, must generally be locked away.
In fact, in this well done, if not utterly brilliant work, John is the major figure of the film, the truth-teller, the one who sees through the rest of the societal conformism.
Yet, the 1950s didn’t have to be that. It was a time of some of the greatest jazz artists who ever performed. Theater was representing some of its most interesting plays off and on Broadway. Some of our greatest composers such as John Cage and Samuel Barber, just two names in a net of dozens, were composing amazing new works of beauty; Ives had finally come to be recognized. Jackson Pollack, and so very many others were creating their very best art (even in the middle of Iowa I encountered those works). Merce Cunningham was dancing. The Beats and Ginsberg by the end of that decade created their most remarkable poetry. The 50s were utterly alive if you looked just beyond the surface in this startingly improvisational world. 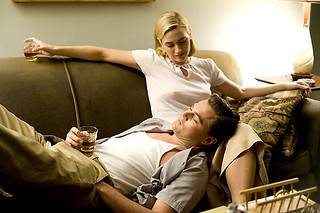 The early 1960s, for me, were far more closed off and limited. As I’ve written elsewhere, as much that the 1950s were mythologized as being a delimited world, I believe that suffocation really took hold in the presidency of John F. Kennedy. Just imagine Jackie having to endure her husband’s sexual appetites. That alone is what made me demand in 1964 to escape to Europe (to the far more open if slightly backwards country of Norway), where I grew to learn how to be happy again.
For all that, I do believe Mendes’ movie, based on the novel of the same name by Richard Yates is far more honest as a film about that era than so many others such as Todd Haynes. Far from Heaven, a movie, re-exploring issues by Douglas Sirk’s films of the 1950s, with gay aspects that seem unauthentic simply because of the true alternatives that the central character’s wife could not quite imagine. She might easily have run-away with her black gardener but could not escape that period’s restrictions about race.
In Mendes’ film, despite the sometimes clichés of screenwriter Justin Haythe’s script, the central figure April Wheeler (Kate Winslet) does seek out just those other alternatives, declaring that she has saved enough money so that the couple might escape for a while to Paris, where she will work and her husband, Frank (Leonardo DiCaprio), will have the ability to consider what he really wants to do with his life. I know couples who have very much made these changes.
It seems to be the true answer to their increasingly frozen relationship and their lack, despite their love of their two children, to make over lives that are stifled by the 1950s society is halted not by societal restrictions but Frank’s own lack of courage.. If, at first, Frank seems passively supportive of the proposition, his own failures—his slightly macho sense of identity and his true lack of knowing what else he might imagine himself to become—creates demurrals in the exciting project, despite their announcement of their dramatic change of life to friends.
A sudden possibility of moving up a bit in his moribund organization changes everything, along with April’s recognition that she is again pregnant. She suggests an abortion, determined to begin a new life with her husband, but he sternly objects.
You can almost predict the results, April’s sudden realization that she does not truly love her husband anymore, brief affairs for both of them with others, and the feeling, particularly for April, that her life is not only suffocating, but closing off any possibilities through she might discover her own existence.
A violent argument and a near-brutal assault on her by Frank, seems 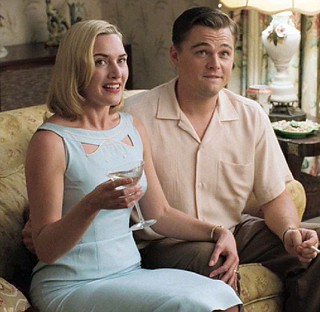 to close out their potentialities, as April escapes into the nearly forests by their “perfect home,” sold to them by their now friend Helen Givings (Kathy Bates), whose son, as I mention above, is the wise-fool who helps the couple recognize their incompatibility. His damnation of the child in her belly settles it for her.

After a night way from the house, April returns, docilely seeming to serve up breakfast to her distressed husband as he leaves their home to take over his new post in his office. April blandly moves upstairs, attempting to abort their baby, which, in the process, results in a great loss of blood, eventually forcing her to call for him, and, finally, resulting in her death.
If Frank seems to now embrace the children he has previous ignored, we recognize it as an outward action, one in which the children must call out for him to perceive even their playing enjoyment. He is a lost man, unable to truly recognize that he, too, might have entered the forest to discover his own identity as his wife sadly has. April has determined to take the chance, while Haynes’ Cathy refuses the choice.