Wim Wenders and Juliano Ribeiro Salgado | The Salt of the Earth

our history is a history of wars
by Douglas Messerli

How to you film a documentary about a photographer? The mostly black-and-white photos of the great Brazilian photographer Sebastião Salgado, although sometimes rendered into video portraits, were, for the most part grand stills representing the grand suffering of  nonetheless proud people, many of whom were working in inhuman conditions or dying in large camps created by genocide and war.
Working with Salgado’s son, Juliano Ribeiro Salgado, German director Wim Wenders chose to project the master’s photographs onto a semi-transparent mirror in which the image and the man behind them are often superimposed, so that we constantly are aware of the creator of the horrific scenes, which display—far too beautifully some commentators such as Susan Sontag and Ingrid Sischy have argued—the photographer’s empathy for those dying and suffering individuals he caught 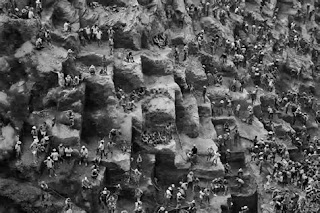 in the eye of his camera. We may not like the images we have of the Holocaust; after all they remove us from the years and months of suffering by the actual individuals, presenting us an unrelentingly objective picture of their inner psychological tortures, but these images make the history alive, make the sufferers come back to life in our imaginations. So too with Salgado’s almost impossible to watch images from the Serra Pelada mine, where thousands of minions must slide down cavernous slopes to dig out the gold ore below. As one critic suggests, this is a vision of mankind the Hieronymus Bosch might have created, a view of capitalism—despite the fact that most of these figures were legal and not truly enslaved, but simply desperate to become richer by uncovering the gold—that might even have shocked Karl Marx. This work, part of Salgado’s “Workers” series of  the 1980s, is truly represented in this documentary as a human inferno, worse that anything that might have come out of the San Francisco gold rush.

Added to his wonderful recreation of the photographs themselves, Wenders embraced Juliano’s monochrome and color films of his own father, including the son’s personal reflections on his famous world-traveling father. For long periods of his life, Juliano was simply left at home, while his now exiled father—since a military junta had taken over Brazil—traveled with Doctors Without Borders to Niger, Ethiopia, and to the Congo, covering the vast genocide of the civil war in Rwanda. Each disaster is worse than the one before it, although the early vast camps of the Ethiopian crisis have images that one can never remove from one’s memory. One might describe Salgado’s passion to capture the sufferings of so many millions of individuals across the globe as a sort of brutal reckoning of the failures of humankind. As he comments, at one point, “Our history is a history of wars.” 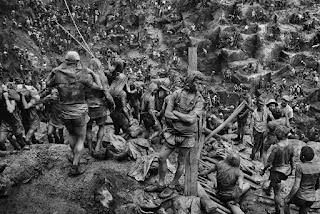 Finally encouraged by his illustrious father to join him on some of his voyages, Juliano was reluctant, but bonded deeply with him on travels to Siberia to the highlands of Papua New Guinea.
And this, ultimately, becomes a kind of family drama when it is revealed that Salgado’s wife Lélia not only brought her husband the original camera, raised his son, while also managing her husband’s career. Through traveling with his father, Juliano comes to know him better than almost anyone, and now, in Wenders’ lovely tribute to the photographer, combines the German’s outsiderness with a glowing portrait of the man who was nearly destroyed by the “heart of darkness” he saw in the cruelty of mankind’s treatment of people who themselves were seen as outside the cultures in which they had grown up. 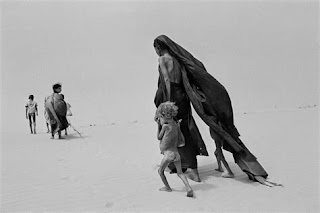 After his volume Exodus, the photographer grew so depressed with the human condition that he could longer go on, having just witnessed in 1984, the famine in Ethiopia; in 1991, the tragedies of first Gulf war in Iraq; and in 1994, the genocide in Rwanda. Returning to Brazil he found that the forest on his own farms had been largely decimated, and his wife, developed a project to replant thousands of trees which became a model throughout the Brazilian Amazon forests—although in this year alone, the current Brazilian President Jair Bolsanaro may have helped to destroy much of that work. What can you do with a human race that wants to eradicate anything different from themselves, who use our far dwindling natural resources to enslave others or to deny them from enjoying their benefits? There is no answer, of course.


This movie, no matter how you might see Salgado’s sudden photographic intrusions into various deprived cultures, give us visions into the darkness of the world we have created. Yes, it does leave one shocked by its vision, but his images also represented these poor sufferers as true human beings worthy of our deep love and regard, and most importantly, our testimony, our memory.
The movie won the Cannes “Un Certain Regard” film category.
Los Angeles, September 16, 2019
Reprinted from World Cinema Review (September 2019).

Posted by greenintegerblog at 9:13 AM