The Ghost Comes Out of the Closet
by Douglas Messerli

The first winner for South Korea of the Cannes Festival’s Palme d’Or, director Bong Joon-ho’s 2019 film Parasite has a great many things on its mind.
On one level, perhaps its most charming, it is a satire of the economic differences (and sometimes surprising similarities) of the vast population of (10 million and with its outlying suburbs 25 million) of Seoul. From one perspective, Seoul is one of the most sophisticated and highly developed cities in Asia, but beneath the towering skyscrapers and symbols of newly-developed wealth are people living in near poverty, their lives at the edge, despite their best attempts to scavenge for enough so they simply might eat. 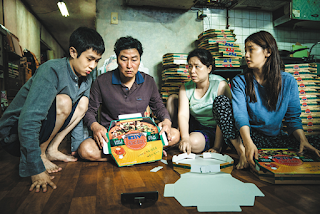 The Kim family, the unemployed driver Ki-taek (Song Kang-ho), his wife Chung-sook (Jang Hye-jin), their son Ki-woo (Choi Woo-shik), and daughter Ki-jung (Park So-dam) are all rather talented and certainly capable individuals, and quite brilliant as con-men-and-women. Yet the society has given them little opportunity to demonstrate their talents. And they have been forced to live in a semi-basement with open windows that view the local drunk pissing against their building and fumigating trucks filling their small space with poisonous fumes.
They get Wi-fi illegally (when they can) from local cafés. Their only income is from folding pizza boxes for a local pizzeria, but even the small amount of money they make from that is threatened when some of their work proves to be shoddy in their attempt to outdo another local assembler. They hardly have a decent place to bathe, let alone a good kitchen; but then they hardly can afford food to cook. The best place to tune the Wi-fi is squatting upon their toilet.
In short, the Kims have found themselves at the near bottom of a society sprung up beautifully during the last few decades into a 21st century model of riches and wealth. And in that sense Bong begins is dark comedy as a kind of naturalist-like treatise, not unlike Maxim Gorky’s The Lower Depths.
Fortunately, Bong quickly shifts gears with a magical appearance of Ki-woo's educated friend Min-hyuk, who in moving on to a higher education, asks his young friend to take over his position as English tutor for a wealthy family, the Parks’ daughter, Da-hye. When Ki-woo finds himself somewhat abashed by the offer, his friend points out to him that Ki-woo has passed the exams several times (obviously it’s simply money that has prevented the boy to move on a higher education), suggesting that Min-hyuk is in love with Da-hye and feels Ki-woo will protect her until she graduates, when his friend plans to marry her. 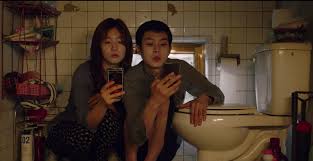 The Kim daughter, an artist and master forger, quickly whips a phony college certificate, and the handsome Kim son is quickly hired, mostly on the basis of Min-hyuk’s recommendations (something Mrs. Park relies on more than documents), for the job, finding himself in Da-hye’s bedroom to tutor the lovely young girl in the modernist architectural masterwork in which the Park’s live.
Suddenly Bong’s film switches to the more comic mode of a film more akin to Harold Prince’s 1970 American black comedy, Something for Everyone, wherein the handsome Michael York entering a Bavarian castle as a servant, sexually ingratiates himself with son, mother, and, later, daughter.
Except here, the young tutor does not necessarily use sex as a tool—although Da-hye quickly does romantically fall for him—but social and political politesse—suggesting that the somewhat artistic son of the Park family—who comically is completely absorbed in all things native American Indian, but seems also quite hyper-active and even mentally disturbed, having witnessed a ghost on one of his young birthdays—might be helped by art therapy.
Before you can even blink, Mrs. Park (Cho Yeo-jeong) has hired Ki-woo’s talented sister Ki-jung (after she has Googled “art therapy”) who appears to successfully quiet down the Park’s son through her teachings, while hinting that the child may have schizophrenic tendencies.
A ride home with the family’s chauffeur, who insinuates that he wants to know more about her, results in her taking revenge by leaving her panties planted near the back seat, where Mr. Park (Lee Sun-kyun) discovers them the next morning on his way to work. Forced to fire his handsome chauffeur, fearing he has had sex with a woman in the car and perhaps even killed her, the two Kims suggest they might know of a man who might reputably replace him—obviously their own father.
In no time at all, the pater familias of the Kims has insinuated that their current housekeeper, the loyal Gook Moon-gwang (Lee Jung-eun) has tuberculosis, and she too is fired, replaced by, you guessed it, Kim’s wife, a woman he describes as “Jessica.”
Perhaps not so strangely, the talented Kims return a household in disorder, even while its current tenants live in luxury, to order—teaching, driving, and cooking quite effortlessly, even if each night they return to the squalor in which they are forced to exist. It is quite apparent that they are better equipped to live in this mansion than are the Parks. In a sense, they are in control of this architectural wonder, while the Parks, although providing its finances, are truly the squatters.
The slow-learning daughter, their small would-be Indian son, the half-drugged-out wife, and the haughty businessman only inhabit it at night, and even then, their son prefers the Indian teepee in their overly green back yard. And when the Parks determine to go on a camping excursion, the Kims sleep over, bathe in their golden bathrooms, and drink themselves into a kind of brooding frenzy.
This half of the film, in itself, would constitute a wonderful satiric movie, but Bong has deeper motives still, as his work turns another corner to become a kind of revenge tragedy. For living in a hidden bunker in the mansion, perhaps even more stark than the Kims’ basement habitation, is the bankrupt husband of Moon-gwang, hiding for years from bill-collectors in a kind of safe-house created by the original architect-owner for protection if ever needed.
The housekeeper comes to feed and, perhaps “collect” her husband, only to find the Kims in midst of their celebration. Charging forward, she films the illegal celebrants and threatens to report their existence to the Parks, as they attempt to steal her cellphone and to destroy both her and her husband.
Suddenly what was a seemingly righteous inversion of cultural injustices turns sour, particularly when the Park family calls to announce they are soon returning home because of heavy rain, and Chung-sook instruced to cook up ramen while the other members of her family hide throughout the house, must clean up the mess. In Moon-gwang’s attempt to return to the kitchen Kim’s wife slams the door back, sending the former housekeeper down the stairs to her eventual death.
As Bo Seo wrote in a very intelligent essay in The Atlantic, we can no longer feel either sad or happy for the Kims.

Though Parasite is mainly about interclass conflict, its most brutal
scenes depict fights between members of the working poor. Here,
as in the rest of Bong’s films, violence is not a path to liberation;
it instead offers a fleeting catharsis that upholds more of the status
quo than it destroys. For families like the Kims, advancement
under capitalism involves beating out their peers for limited
opportunities, to the extent that parity with others in the working
class begins to feel like failure.
In their attempts to get ahead, the Kims end up replicating
the abuses of the wealthy—fraud, conspiracy, blackmail, and
assault—against the poor, whose ranks they desperately wish to
leave. When Ki-taek wonders about the fate of the driver his family
schemed to get fired, Ki-jung snaps: “We’re the ones who need help.
Worry about us, okay?” But unlike the rich, the Kims cannot hide
their transgressions behind masks of respectability and institutional
legitimacy. When the basis for their employment by the Parks is
revealed to be nepotism, a mainstay of elite consolidation, the news
media and their audiences are scandalized.

While I generally do not attempt to keep the plot away from readers, about the final feverish scenes of violence which end in several deaths, as if right out of a Quentin Tarantino movie, I will remain mum. Although almost mortally wounded, three of the Kim family survive, although no one knows to where Mr. Kim himself has disappeared.
The film’s ending might almost seem uplifting, as Ki-woo, back in his semi-basement hovel, finally determines to finish his schooling, make a lot of money, and free his semi-imprisoned father by buying the Park mansion, now owned by a German family.
In that determination, however, Bong asks his society and us if, in any society with such class divides, is this simply a pipe dream or might it be possible to heal the past? The answer, of course, does not lie in the film, but in the determination of the society to change conditions. I do not feel positive. But dreams are necessary to make anything happen. If his father, after the family has suffered a flooding of their own decrepit apartment, suggests that one should never make “plans,” since they always fail, this young boy is making plans, is imagining a world outside of that in which he has lived. And any caring person in the world knows that such “plans” are the only way out.