sick of symmetry
by Douglas Messerli


Luis Buñuel’s The Phantom of Liberty, his penultimate film, is both horrific and hilarious at the same time. This non-narrative narrative (and it is after all a series of interconnected stories), clearly sums up Buñuel’s dismissal of normative values and his deep embracement of human interactions. His characters in this highly surrealistic but also basically humanist tale are not so much studies of complex human beings but represent the perversity of life, the nonsensical aspects of it, and the ridiculousness of our societal demands to correct it or, worse yet, simply to normalize it. 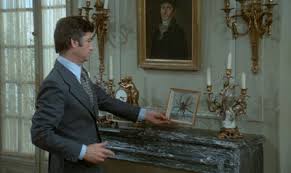 As a character comments to himself as he moves about objects on his mantel: “I am sick of symmetry.” So too are the director and his long-time collaborator, Jean-Claude Carrière. But yet this film has a kind natural symmetry from scene to scene that as, Buñuel himself described it, “opens a door,” or, as I would argue, presents us with numerous opening doors, many of them quite perverse, but in this film’s imagination telling are all also very funny.


A young high school boy enters a small rural hotel to have an incestuous sexual liaison with his aunt. At the last moment she becomes wary, and will not allow him to touch her even though she clearly is in love with him and is willing to show him her quite youngish nude body. The eager boy near suffocates her with a pillow in an attempt to make love to her before regaining his senses.


The moment he leaves the room, however, he is lured in by another guest in the hotel for a late-night drink in his room. There the boy discovers another good-looking woman, while the same man insists that several monks, also staying in the hotel, join him. They have been previously playing poker with holy relics in lieu of money. While they sip their port, the woman slips into the bathroom to redress herself in a leather skirt and whip in order to perform the role of a dominatrix, the man soon following her to dress in a pair of pants open at the back to show his ass, the couple soon after begin performing their act, while the monks and the young man flee the room. 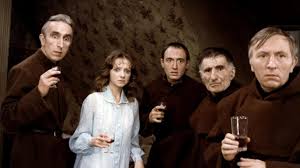 Yet we perceive that they are all interconnected, the boy hiding his own incestuous desires—which he soon consummates upon returning to his aunt’s room—and the monk’s gambling away the church treasures and who knows what else as they shuffle back and forth into each other’s rooms.


In another scene, two young girls are approached on a playground by a man we perceive to be a pedophile, handing the children several postcards which we can only imagine contain pornographic images. When the children tell their mother what has happened and show her the postcards she is shocked by what she sees, yet allows her daughters to keep the cards, which are later revealed by the camera to contain nothing more than tourist-like scenes of French villages.

This is hilarious, yes, but it also should be noted that it


carefully challenges the definition of what is considered


prurient and immoral and who upholds those rules.


We are directly implicated because of our knee-jerk


reactionary response to the man and his supposedly

In yet another sequence, a young poet suddenly takes out a gun and shoots several individuals on a street. Tried for murder, he quickly becomes a hero from whom everyone demands a photograph, as he is permitted to leave by the judge with any imprisonment.


One of the most disgusting scenes is perhaps the funniest and family and friends gather around a beautifully-set dinner while sitting upon toilet stools. Not very different, indeed, from Petronius’ feasts, where the guests come and go throughout the meal to the vomitoriums. 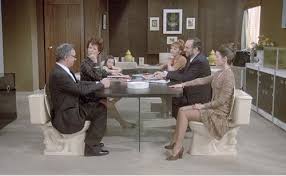 In fact, I might suggest that Buñuel’s film, in its structure, is very much like the Menippean Satire—sans the autodidact—of which Petronius’ Satyricon is a major example. Here perhaps the director and co-writer are themselves the pedants telling us what we can’t ourselves otherwise see.


Although some critics have argued that The Phantom of Liberty was a departure from Buñuel’s previous films, I’d argue, along with Foster, that The Exterminating Angel and films that followed share a great deal with this work, presenting people who cannot see their own prejudices and social stupidities due to their moral blindness.


My favorite sequence, in fact, concerns just this issue. A seemingly happily married couple suddenly realize that their young daughter has gone missing, quickly reporting it to the police. Yet the daughter is there, in the flesh, with them all along their wailing travails. The chief detective even interviews her about her own disappearance. The child speaks but her parents and other authorities simply cannot hear her. The young girl patiently, time and again, attempts to explain that she hasn’t gone anywhere. But her pleas remain unheard. Isn’t that precisely how often treat children, never bothering to listen to their own voices and complaints? Given the chaotic world that this director presents about adults, mightn’t it be to our advantage to listen to the young. The recent horrific treatment of the 16-year old Swedish climate activist Greta Thunberg reiterates these very concerns. If as, Stephen Sondheim argues in Into the Woods we should be careful what we say because children “will listen,” perhaps it might be even more important that we listen to them.


For Buñuel, himself, this film was a working out of his belief that “Chance governs all things; necessity, which is far from having the same purity, comes only later.”


Given my constant observations of how much coincidence and chance have played a role in my own life, how could I not love this film.


Reprinted from World Cinema Review (October 2019).
Posted by greenintegerblog at 8:31 AM