ghosts of the past
by Douglas Messerli


Pedro Almodóvar’s most recent film, Dolor y Gloria or, in English Pain and Glory, is just what its title proclaims, a work of great pain and great enjoyment. The usually rather private director in this case has suddenly and rather subtly “come out,” so to speak about his past: his own illnesses, which include terrible back pain, headaches, and a continual problem in his tracheal passages which lead him to constantly choke; in the early scenes in this film it is almost like a conference between old people who cannot help but share their medical problems with one another: I’ve been there. In this case it’s somewhat comically (or not so comically, given your perspective) animated.


When the director, the central character of this film Salvador Mallo (Antonio Banderas) hooks up again with an actor Alberto Crespo (Asier Etxeandia)—whom he previously broke with because of his drug habits and his inability to properly perform because of them—on account of a new showing of Crespo’s major acting gig in Mallo’s  Sabor, the fictional director, and we can presume the actual director Almodóvar, quickly picks up the habit of smoking heroin, which just as suddenly becomes a regular habit for him as well.


As the two hook up again, Mallo, in a somewhat sanguine mood, allows Crespo to take the role in a small memory piece he has written for stage. Quite by accident, Mallo’s former lover, Federico (Leonardo Sbaraglia) now a married man with children (perhaps a portrait of Banderas himself; the actor admited that when he read the script for this film he was somewhat taken aback to realize that he, in fact, was one of the characters in the very movie in which he would star), returned from Argentina (a metaphor, one can imagine, for Banderas’ own move to the US, where he played in the Argentina-based Evita) to Spain.


Touched by the autobiographical details recounted in the Crespo performance and recognizing himself in the one-man play, he also makes contact again with Mallo, the two of them spending a lovely flirtatious evening, with the director finally refusing to have yet one more fling with his former lover. 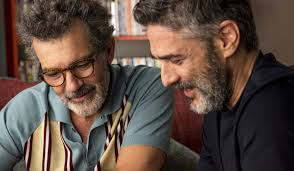 In fact, this work, with its quick and unpredictable shifts between the director’s past and present, represents an unlocking of all the ghosts who haunt his present who have helped to make it impossible to create and who maybe are also behind many of his current illnesses. At one point, his mother, now an old woman (Julieta Serrano), not at all like the youthful version played by Almodóvar regular, Penelope Cruz, confronts him as not having been a very good son. He has, after all, abandoned her for a gay life in the city. Now her only wish is to return to the village to which they moved to follow her husband into a cave-like dwelling where she wants to die. Mallo promises her that he will make that possible, but his mother dies in a Madrid hospital before he can accomplish it.


Some of the film’s most beautiful scenes, indeed, depict Mallo’s childhood, particularly concerning water. The women around him, including his mother, gather at the river to wash their sheets and clothing, drying them over the nearby shrubbery. It is the gentle streams, Almodóvar seems to suggest, that cleanses all the evils and imaginary fears of life. 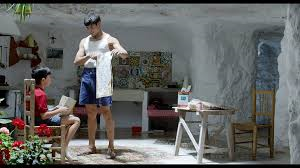 A local artist and day-laborer, whom the young intelligent boy has taught to read and write, working in the house, decides to strip down and bathe in the kitchen, causing Mallo the child to faint in a near-rapturous reaction to the man’s naked body. The adult is also clearly aware of the beautiful child, painting his picture on a cardboard scrap, which by the end of the film has mysteriously found its way to a local gallery, and which Mallo quickly purchases.


It is apparent that all of Mallo’s old loves have returned, like ghosts come out of the closet, to help him reclaim his life and lead him on, perhaps through the very past which he now shuns, to a new film about the mirrors of his past. 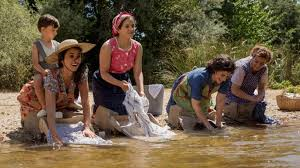 The final scene of the film appears to again return to the past, with Cruz as the mother as she and the young Mallo prepare to enter their new lives together. But this time the camera moves back to reveal a sound-man, a photographer, and the director himself filming it as the movie it has now become. The specters of his youth have become larger-than-life figures of his now older and more nuanced old age projected to screen.


Banderas reports that the rooms of Mallo’s cinematic house were very much like Almodóvar’s own home, and that some of the clothing he wore was actually shirts and pants from the director’s own closet. There is something both touching and haunting about this: a kind of open honesty and a somewhat frightening retreat to repetition in these facts. But then this is just what this completely revelatory piece of cinema is all about. Like his greatest films, All About My Mother and The Skin I Live In, this new film presents an all-too painful representation of desire and love, often a series of messy problems in real life. I believe this may be the great Spanish director’s best film to date.