Film critics, get over it! Robert Eggers’ new film The Lighthouse is not at all a psychological-terror drama of two men going mad in a gloomy lighthouse. It’s, instead, a rather remarkable statement of the late 19th century views that made up Freud’s notions of male passion, rejection of the father, and pyschosis. All of which, given our now 21th century views seem rather ridiculous.
Yes, all young boys, at one time or another, want to kill their fathers or go to bed with them. Mothers are often not to be seen, except in the notions of mermaids and slitheringly obscure figures. They are always kept at a far distance from their young sons. That is the subject of this odd and somewhat perverse film. 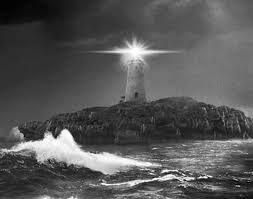 The lighthouse is itself a phallic statue that, which with it’s milky, high-tower warmth of mother-like white light, creates great problems for the very troubled youth of this work, Ephriam (Robert Pattinson), who later admits to having the same name, Tommy, of his tormenter, the father figure who will not ever give him credit for his hard labors, the salty Thomas (William Dafoe), who makes up stories and myths faster that you can ever even assimilate them—or in some cases even hear them.
He is in control of the mother-figure in this male-dominated film, the light itself. He alone is in charge of the mother-lode, and the son/young youth he has hired has absolutely no access to, and is understandably frustrated. The father, in this case, the elder Thomas, will never allow his symbolic son even entry to his bed, the center of the lighthouse, and the source of its power.
Welcome to Freudian Pyschology 101. 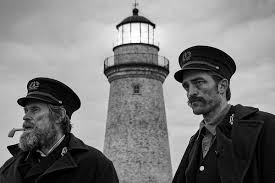 This film, if you look at it from a somewhat academic view, is a hilarious black comedy about all of young male’s fears and doubts. Trapped in an impossible relationship with his paternal figure, the young Tommy, Jr. is forced to do all of the labor without not only appreciation from the father figure of Egger’s film, but with an absolute rebuttal, as he later discovers in a journal saved from the flood of their hatred, of anything he might have truly accomplished. Isn’t that what many fathers have done through the centuries?
Like all youth, young Tommy (Ephriam) masturbates himself into mad sensation, while the elder acts as a distant voyeur, even while encouraging him into drunken madness of his own life. How can the young Tommy resist the almost pedophlic demands of a father in this dance of utterly male kinship? Their somewhat healthy clogging quickly turns into a slow-dance of intense involvement, forcing the younger man to admit to acts he might or might not have ever committed.
That is the dilemma for all young boys, admitting to what they may (in this case a passive murder of a fellow logger) or may not have accomplished. 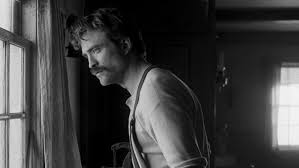 Yes, there are certainly homoerotic aspects to any father/son relationship. How can there not be, when the son is forced to love a father who controls his life? And the S&M aspects of that relationship are certainly played out in Eggers’ highly smybolic film.
The son must destroy the father to get even near to the mother—in this case the light at the top of the penis in which the two are entrapped. Even the vision of the mother-lode, the light at the top of the tunnel, is enough to send the young Tommy into a spin back into the spiral of the lighthouse staircase into death, his entrails eaten by the sea-birds which his Melvillian father has called up in his frenzied hatred.
If you treat this film at all as a sort of naturalistic treatist about lonely men in an isolated world, you won’t be able to appreciate the director’s dark vision or even begin to comprehend the deep mumble-jumple of Dafoe’s brilliant acting, nor the prickly reactions of Pattinson, along with the brilliant cinematograpy of Jarin Blaschke. Eggers’ square box of filming, which confines the entire action to claustrophobic statement of content will make utterly no sense. 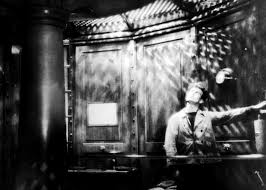 This is not the world; this is a vision of what our nightmares are all about—at least according to Freud, who came out of these very times. The dominant father, the missing mother, the terrified son, are here the creatures we explore. Death is not death in the traditional manner, but symbolically a statement of what families do to one another, the lighthouse representing a kind a family structure. The phallus, in our lives, is unfortunately, everything in Freudian life. Both the young Tommy and the elder Thomas need to serve it assiduously. The perversity of this film reveals how much we need to alter our ways.

Posted by greenintegerblog at 1:17 PM