the ungluing of hollywood stars
by Douglas Messerli

Tom Edge (screenplay, based on the play End of the Rainbow by Peter Quilter), Rupert Goold (director) Judy / 2019

Hollywood movie producers and directors love displaying the ungluing of Hollywood stars. Witness Nora Desmond’s slow dance into madness in Billy Wilder’s Sunset Boulevard, the drowning death of former star Norman Maine in A Star Is Born, the rise and fall of the Marilyn Monroe-like figure in Paddy Chayefsky’s 1958 film The Goddess, or another hero of both film and Broadway, Cole Porter, in the 2004 film De-Lovely (which nearly everyone except for Howard, me, and Charles Bernstein hated) who fell into compulsive gay sex, losing his wife and his legs. And there are truly dozens of others. 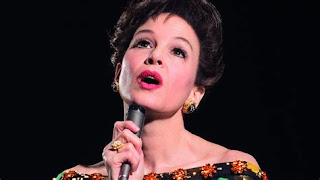 Fame and success are gleefully brought down in these Hollywood standards, each performed by quite powerful stars themselves: Gloria Swanson, James Mason, Kim Stanley, and Kevin Kline. Predictably, you need a star to portray a star, even if all of these remarkable people also seemed to also decline after playing their larger than life figures.
Yet, the one thing all of these movies had in common is that they showed or hinted at (in the case of Nora Desmond) the reasons they rose to fame. In each of these films there was an arc, even if just imagined, of how they had become such legends, which, in turn, made their falls even more tragic.
Not so with the movie I saw with Howard the other day in celebration of his birthday. Judy, directed by Rupert Goold, which simply presumes we all know why Judy Garland is so important—and except for brief passages of her encounters with Louis B. Mayer (Richard Cordery), a young somewhat look-alike of Mickey Rooney, and her horrific mother, Ethel Gumm (Natasha Powell) constantly feeding her daughter drugs to make her sleep and get her up—we get very few glimpses of how this great legend reached her heights. 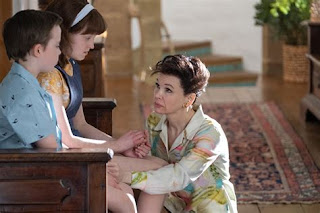 Accordingly, as a script this is a fairly moribund tale, based on Peter Quilter’s play End of the Rainbow, with a screenplay by Tom Edge. These are the final months in the life of this amazing singer which focuses on all of her failures: drugs, alcohol, and the worst taste in men that one could imagine.

Garland might be said to have chosen men with whom to have affairs and marry were the very people who helped bring her down. The list was long: Artie Shaw (who later eloped with Lana Turner), David Rose (who at the time was married to Martha Raye, but whom she later married), songwriter Johnny Mercer, and even Orson Welles (married at the time to Rita Hayworth). Her husbands and later lovers, who included director Vincente Minelli, Sidney Luft, Mark Herron, Peter Allen (who later married her daughter, Liza), and Mickey Deans (portrayed in this film by Finn Wittrock)—two of whom were gay or bisexual (Minelli and Allen), and the other three whom she accused of beating her. As her British handler, Rosalyn Wilder, for the English performances at Talk of the Town—portrayed in this film by Jessie Buckley—described Garland’s death a few months after at the singer’s young age of 47:

And to be found like that [dead from a drug overdose] by that
ghastly Mickey Deans is just awful. We’ve had people here
who have not been well, but that was a big star and we could
see how badly Mickey Deans was treating her. You really
wanted to get hold of him and go, “Go away!” It was like
rubbing salt into a wound. She didn’t need that. She thought
she did and she didn’t. 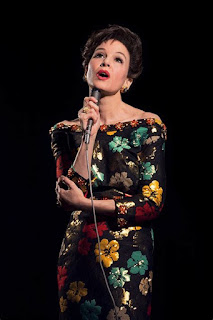 Garland herself appeared to realize, as this film portrays, that much of her audience were gay men, not only in touch with her heartfelt singing, but sympathizing with her sexual mistakes. In Judy Garland chooses, quite suddenly, to join up with two elderly gay fans to go to an impossibly late night dinner, which ends, after their failure to find an open restaurant, with the three ending up back in their modest flat, where even the omelet, infused with cream, doesn’t quite work out. Judy attempts to scramble the eggs, but nothing quite succeeds—a metaphor, clearly, for her inability not only to find a sexual equal, but her impossibility to find even decent housing for her beloved children. These men, who themselves have suffered the British laws regarding homosexuality, have survived, just as Garland has, such difficult times that they too are exhausted, unable truly to make sense of their personal love—except for Garland for whose concerts they have bought tickets every night!

The bond is an important one: the sense of great possibilities lost in a series of systems which do not easily allow entry to outsiders, which Judy has now also become. That scene is perhaps one of the most lovely of the movie, a point where the great legend crashes down to meet up with the city in which she is not quite certain she is in (at one point she questions on stage whether she is in London, San Francisco, or New York) and to meet up with a couple of its everyday citizens. It is like going on a tour of the world in which she has become out of touch, which allows her to fly back to Kansas once more.
So this film, about Garland’s last desperate attempt to regain custody of her children, Lorna and Joey Luft, is basically a sordid affair, not something one might wish to experience on the big screen. Garland was exhausted—even if often personally energized, by performing night after night—from the results of throat surgery, drugs, and alcohol, and just the human abuse of her talent.
In fact, this movie might have been a disaster, given its sort of pedestrian presentation—despite the lovely costumes by Jany Temime and the basically beautiful set decorations of  Stella Fox—if it weren’t for the truly exceptional performance by its unexpected star, Renée Zellweger. Yes, at times her performance is mannered: her quivering lips alone become a major subtext in this drama. But none of that truly matters given her all-out commitment to her character.
Zellweger, superficially, looks nothing like Garland, and her singing is not completely in tune with Judy’s tremolo and musical interpretations. Yet, here it doesn’t matter. Zellweger is another kind a Judy, or at least becomes another one. We believe her because we believe in her acting, through the passion with which she imbues her character.
There are certain impersonations which simply miss the mark. But Zellweger is no impersonator, but a kind of vision transforming Judy Garland’s sad last months onto the screen. If she doesn’t win major awards for this role, I would be shocked. I’ve seen her performing many roles such as Bridget Jones and Roxie Hart, both plumper embodiments of  great enjoyment; but nothing ever prepared me to see her as I did the other day.
If her singing was not up to Garland’s, it hardly mattered; she met her material full on much as Garland did herself, plumping up her now very thin, older body, to achieve great resonance. She convinced me that she was a frail and frightened as Garland herself in her last dying year. Without Zellweger, in fact, this film would have been forgettable, but with her constant presence, she makes this a work to never forget. Films about great actors need great actors; I might never have imagined Zellweger as being such a figure. But she certainly has proved me wrong.
Judy is as much about Zellweger as it is about Garland. This actor has now become a legend of her own.