Although filmed in muted Technicolor, Jacques Tati’s wonderful Mon Oncle might as well be a silent film in black-and-white. Well, not really, its satire about modernism, the upper class pretensions, and consumerism in general needs the lusciousness of its 1958 color treatment. After all the lovely presentation of the modernist, gadget-ridden Villa Arpel requires all the color it involves, with its highly uncomfortably forbidding chairs, constantly-shifting tables, umbrellas, and endlessly unable to follow stone and srubbery-ridden paths, along with its spitting fish fountain all demand the lens of Technicolor, with a capitol T, surely.
Zero for Conduct. These kids cause adults to blame one another for implausible car accidents and force street lovers into streetlights—all perhaps innocent mischievous actions, yet sometimes dangerous nonetheless. 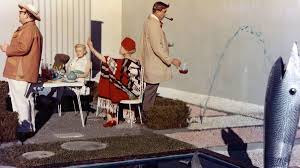 If it is a bit difficult to imagine Mr. Hulot (Tati), the uncle of this tech-savy family, being a hero, particularly to his nephew Gérard Arpel (the likeable Alain Bécourt), well, we might simply chalk it up to Hulot’s passivity or his simple inability to behave like the bourgeois adult world which keeps attempting to embrace him. He too is a child, in his own way as disruptive as the schoolboys in the Jean Vigo’s
If Hulot may somehow encourage the behavior of the young Arpel, he seems totally innocent of his involvement, or even the permission he allows his beloved nephew.
In fact, he is more destructive than the child, clipping the carefully designed hedging’s outside the Arpel gate, automatically designed to allow entry, puncturing the water system so that the participants in a grand lunch which his sister and brother-law hope to introduce him to their native-American dressed neighbor, whom they first perceive as a rug-merchant, are continually drenched in the water system’s sudden surges.
In his sister’s entirely automated kitchen, he causes near chaos simply attempting to boil a pot of water.
The naughty boy Gérard, rightfully, loves all of this; yet Hulot himself, bumbling through his life, has no idea of what he has accomplished.
The incredible thing about Tati’s direction is the movement of his figures through space, moving the camera to watch them carefully through a series of windows in the scenes at Hulot’s Paris apartment, where he lives on the top of a series of interconnected rooms, the workplace scenes of his brother-in-law’s equally modernistic, almost Chaplinesque-like factory Plastac. Throughout this work the women’s heels clack over the landscape with a sad insistence of gender-defining roles. They clatter through the territory created by their male counterparts, desperately attempting to catch up to the acclaimed “accomplishments” of their male companions, but in their click attempting to define, perhaps unsuccessfully, their own territory. They, and their husbands, are equally ineffectual in a world that does not allow anyone to sit down in a comfortable chair and truly communicate. 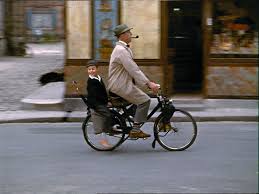 Tati, correctly, makes their endless chatter almost incommunicable. They are not truly saying anything worth hearing, we quickly realize. Hulot says hardly a word, but he delivers up his nephew into a world of action and childhood speech. The more the metallic fish-fountain pours its mechanized waters into the air, the more Hulot’s silences speak to the mountains of echoing protest.
Hulot even turns the plastic products of his brother-in-law in a simulacrum of sausages. He is about living: a young girl who receives his tender finger kiss, awards him with sweet candies every day, something which the Arpel’s might never have imagined sitting on their metallic-structured chairs as they attempt to stare into a sunset they cannot even perceive.
Like Vigo, Tati suggests it’s only the “bad boys” who will allow society to regenerate itself.

Posted by greenintegerblog at 5:33 PM