different lives: lying to your other self
by Douglas Messerli

Ed Perkins’ award-winning documentary from 2019, Tell Me Who I Am, cinematically speaking, is a rather awkward work, relying on only a few images, mostly photographs, haunting pictures of a family’s large sprawling mansion, and, mostly, two taking heads—the identical twin brothers, Alex and Marcus Lewis whose lives this film recounts.
Without knowing much about it, I watched this film on Halloween morning, which could not have been more appropriate for this true ghoulish tale.
If you haven’t yet seen this film, perhaps you might wish to wait before reading my tell-all review. For some people plots or stories matter immensely; I tend to be more interested in reveling in the entire experience of films and books. I’ve seen Hitchcock’s Vertigo, dozens of times, and yet it still puzzles and enchants me every moment. Having now seen this film, and having been moved by the conversations of these two unfortunate brothers—and now realizing that Perkins didn’t need to be a clever cinematographer given the poignancy of the story he was telling—I might surely see this film several times over, even if it is almost too painful to watch. 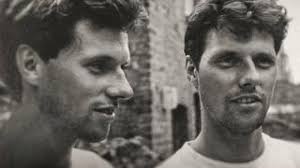 For identical twins, the other is almost the same as the self; I know this not only from reading several essays on the subject but from my experience with the Wine twins, who I got to know in my late college years. So, it is not surprising when Alex suffers a terrible motorcycle crash and wakes up in the hospital without any memory, the only thing he does know is that Marcus, sitting next to him on his bed, is his brother: although he can’t recall his own name or the vision of his mother hovering nearby, he recognizes Marcus.
Returning “home,” a world without meaning in this case, he discovers a terrified woman of some 6 feet tall, with apparently a quite vivacious personality, and a sour and often violent father who hardly has the time to talk to his children, without the ability to even comprehend the situation. The boys, from the age of 14, have been basically forced out of the mansion into what is called the “shed,” where they share a room without even a key to enter the house itself. Mysteriously, certainly to the now completely unknowing Alex, they are refused entry to many areas of the parent’s living quarters, including the stairs. Like servants they live downstairs only, sharing meals with the highly eccentric mother and father with little other contact. 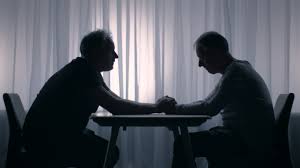 The result could be viewed as a meditation on memory, an Oliver
Sacks-like case study or a deeply unethical experiment in which
two identical twins are allowed to cope with abuse in completely
different ways. Before Perkins met them, the brothers co-wrote
a book about their experience, which bears the same name. In the
documentary, the director appears to be interviewing the twins
separately, but he’s really just filming them as they recite their own
story. They’ve chosen their words carefully; they cry on cue; and they
share just enough, while holding back an enormous amount of
information.
That’s their right, of course, but by the end, there are large segments
that still don’t add up. More peculiar still, once the twins have had their
cathartic moment, neither one seems the slightest bit interested in holding
the culprits of their childhood suffering accountable. It wasn’t just their
parents, both dead now, who abused them. If “Serial” could influence the
fate of Adnan Sayed, surely the Lewises’ book, followed by this
documentary, has the power to expose the monsters who preyed on
them as children. In a scripted thriller, one can bet that unlocking the
source of Alex’s trauma would bring all of his memories flooding back.
Here, the process merely points the way to an even deeper mystery.

We have always to wonder whether Alex’s accident wasn’t a kind of fortuitous event, that his need to forget was behind his amnesia, which his twin recognized and used to help his own way out of the horrific past they both had suffered?


Posted by greenintegerblog at 9:14 AM