playing with time
by Douglas Messerli

PlayTime, Jacques Tati’s 1967 film, is perhaps his most unusual, in part because the director/actor as the famed Monsieur Hulot alternates between the lead and a supporting figure, and seems to be walking throughout the film through a maze of high-rises that did not truly exist during the time of Tati’s filming. Tour Montparnasse, the tallest building in Paris other than the Eiffel Tower, for example, was not built until 1973, and Tour First was not built until the following year. 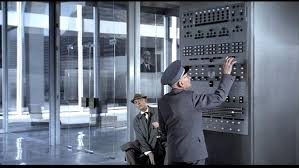 The film also, a bit like Mon Oncle, takes us through a gadget-crazed world, with moderne black plastic chairs covering Styrofoam so that after sitting upon them they pop back into shape, improbably complex entry buzzers that even the doorman hardly knows how to use, brooms with headlights, and apartments with large glass windows without curtains which even the most voyeuristic or exhibitionist-inclined New Yorkers might never have imagined possible. 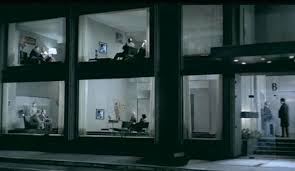 As François Truffaut commented, PlayTime is “a film that comes from another planet, where they make films differently.”
The movie begins in a medium-sized high-rise, which at first site, with nuns walking down the hall, a couple whispering consoling words to one another, the entry of what appears to be a woman in a wheel-chair being taken down the corridor, and a military officer anxiously pacing the hall, seems to be a hospital; yet soon after, when a gaggle of mostly middle-aged American tourists suddenly appear, we recognize it as Orly Airport, and the fun begins, the women mumbling the absurd truisms of so many US travelers—in this case penned by humorist Art Buchwald: “I feel at home everywhere I go,” “Look at how little their cars are!” and “It’s the same everywhere.” Surely Noel Coward had this touring group in mind when, a few year’s earlier, he wrote his satiric musical about travel, Sail Away.
These women might just as well have stayed home to look at pictures of that beautiful city instead of traveling to it. Indeed, to save money in this highly expensive work (Tati went bankrupt making the film), he often used pictures of the major tourist spots instead of filming them; he saved his camera expenses for elaborate studio-built constructions, described as “Tativille. Besides, his tourists seem more impressed by the futuristic airport light fixtures than in seeing the older Paris neighborhoods. And like small children on a school outing, they are constantly being counted by the tour-guide as if he were their somewhat frustrated teacher having to deal with their stupidities.
The only tourist he cannot quite keep track of is a younger woman named Barbara (Barbara Dennek) who keeps slightly wandering off to find the “real” Paris, sometimes in the most unlikely places, such as a flower-seller ensconced a street of concrete structures.
There is no real plot to Tati’s movie. Rather, when he’s onstage, Hulot simply wanders. Why he is determined on visiting the first high-rise, we never quite discover. Yet he must be expected, since a endlessly heel-clicking (a sound device the director had previously used in his Mon Oncle) assistant travels a very long hallway to temporarily retrieve him.
The clumsy, always umbrella-toting Hulot, is left alone in a large reception room, but still gets lost even in the building’s elevators, and wanders away, much like Barbara—a parallel surely intended—from whatever destination he might have intended to arrive at. 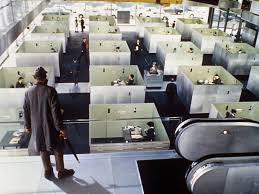 Yet the small office units, much like cargo containers, he witnesses in his voyage through corporate France says nearly everything. This is not a world big enough to contain the lumpen Hulot and his umbrella.

In scene after scene, Hulot stumbles through the world in which he seemingly lives, attending with another mad gathering of tourists (this time Japanese businessmen) into a trade exhibition where he, mistaken as a salesman, successfully selling one of the lamps; and later a brand new (they literally finish the décor as the first guests arrive) trendy restaurant, where the waiters serve up food that is never eaten, sprinkling it again and again with lemon and pepper, and in other occasions simply forgetting to serve the orders up. 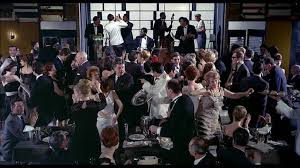 Fortunately, there is also a dance floor where everyone, a bit like in the 1963 movie Charade suddenly takes openly celebrate, Barbara (dressed in a shimmering green gown mocked by the patrons, dressed mostly in black) and Hulot—who along with most the film’s other figures—finally meet up, the perfect pairing, given the fact of her finally being able to discover, so Tati suggests, the “authentic” France—a kind of foolish but just as romantic Maurice Chevalier, stumbling instead of singing his way through the city of light.

After a brief visit to a friend in the house of windows—perhaps another kind of version of the city of light—Hulot meets up again with Barbara, presenting her with a couple of small memories of his city, primarily a scarf which she proudly dons as her tourist bus back to the airport and numerous cars make a seemingly endless circle as opposed to the wandering paths of their former voyages, that can only remind one of Tati’s later film, Trafic.
At first, I didn’t know what precisely to make of the film’s title. Of course, “play time” reminds one immediately of children—which all of these characters, in one way or another, are—being allowed to simply “play,” an important development of children in their transition to adulthood. Yet, I finally realized, Tati was also talking about playing with time, allowing oneself to move through space with utter freedom, lacking any certain goal. The characters here, not one of them, know where they are going, only wandering through a kind of new wonderland without knowing the good or bad of that world into which they have entered.
The openness of Barbara and the gentle, often witless charm of Hulot, are exceptions to the way all the others play with time. And in Hulot, particularly—a role evidently that Tati had tired of playing—everyone seems to recognize someone from their “playing” at life who they know. Throughout Tati’s film people keep coming up to raincoat, umbrella-carrying figures (a British traveler, a black man, a miniature version of Hulot) to greet him, as if in fond-farewell for the bumbling innocent in all of us.


Posted by greenintegerblog at 9:16 AM