Pierre Étaix may be one of the most almost-forgotten geniuses of cinema history. For years, because of contested film rights and much-needed restoration of his cinematic history, Étaix was basically ignored, despite his continuation of the tradition of great filmmakers such as Buster Keaton and, more particularly, Jacques Tati, the latter of whom for which he worked as a sketch artist and assistant director before moving onto his own cinematic career. 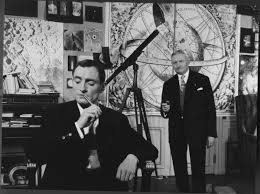 A bit like both Keaton and Tati, Étaix, whom critic Dave Kehr describes as “a small man, with a spherical head and large, liquid eyes”—in different perspectives, how you might also characterize Keaton and Tati (although Keaton’s made-up eyes are something you might even wish to jump into, while not so with either Tati or Étaix)—and like his predecessors is a kind of acrobatic being, balancing himself constantly against a world that has tilted in a wrong direction.
Yet not one of this trio of comic greats is a true clown in the sense of Fellini’s notions or even that of the American frantic Jerry Lewis, who Étaix attempted to make a movie with, Day the Clown Died (apparently now lost). 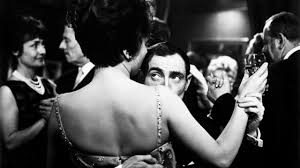 As Kehr points out, Keaton, Tati, and Étaix, unlike Lewis or even the Marx brothers before him, were never non-conformists nor were they innocents. Indeed, they desperately attempted to maintain a conservative equilibrium in a society in which simply did not know how to incorporate their personal eccentricities. Or, perhaps even that is a wrong word. They were not intentionally eccentric, but simply incapable of behaving as the conservative, often wealthy society in which they lived, demanded.
The young man of Étaix’s suitor is simply tuned out as we might say today, with earplugs in his ears—not in this case so that he might tune in to the newest YouTube, Facebook, Instagram, or other computer devices—but simply so that he might be able to study his intellectual interests of astronomy.
His imperious mother (Denise Perrone), however, determines that it is now the time that he should be married, as if he were some overaged maiden, and prods the father (Claude Massot) to lecture him on the subject.
Fortunately, the tuned-out son hears little of his father’s discussion of the subject accept for the last few words that he must now marry, and obediently attempts to follow up. He asks the families’ Swedish au pair, Ilka (Karin Vesely), in his first actual line of dialogue in what basically, for Étaix’s character, is a silent movie, if she will marry him. The Swedish Ilka, as lovely as she is and as longingly she might look in his direction, does not yet have the skill to completely comprehend French, and answers in her native language, representing yet another kind of “tuning out” —and another kind of “difference” that cannot quite be bridged. 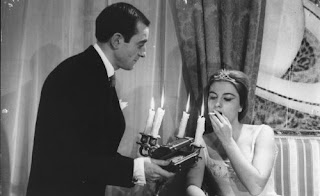 To find a proper mate, our hero goes to all the wrong places. Seeing an attractive woman on the street, carrying groceries, he mistakenly offers help, grabbing up the packages, which actually belong to an elderly woman with whom he is left.
His attempts to imitate the suave men who seduce women in restaurants and bars is an utter disaster. He can never, fortunately, be the cads he might wish to imitate, who these women seem to prefer to the natural innocent (and yes, I use that word advisedly, since this figure would desire to be nothing like a foolish innocent) that he actually is. He attempts to light cigarettes for women with the art of Humphrey Bogart, with no avail; he slips into banquettes where women have been temporarily abandoned by their would-be lovers, only to have the males return to their conquests. He is trying to learn all the tricks of male dominance far too late in his life.
When he finally meets a woman, abandoned by her male companion, who seems receptive to his gaze, she turns out to me a drunken lout, joyful for his financial appreciation, but unable even to return to her own house.
She chases him into the would-be arms of performer Stella, with whom, after a backstage encounter, he imagines a relationship, posting dozens of pictures of her on his walls, even bringing a larger-than-life cut-out of her into his bedroom. He has become the teenage boy with a crush that he before never had the opportunity of being.
His parents are righteously aghast. And we realize that this suitor is no longer up to the task. Meanwhile, the beautiful Swedish Ilka has been working hard to learn her French, finally is able to respond positively to his request. She is the perfect match.
The great screenwriter, who worked with Buñuel and so many others, Jean-Claude Carrière, wrote this comedic romp, the premier of Étaix’s brilliant, if somehow forgotten, career. Fortunately, Criterion films again came to the rescue, and we now can see the works of a master comedian we otherwise might almost have lost.