It’s strange today, 70 years after its original release in 1950, that I might wish to describe Jean Genet’s Un chant d’amour as one of the most truly romantic movies ever made.
Upon the attempt to show it by Sol Landau at Berkeley in 1966, the local police wrote that if he actually screened it, the film "would be confiscated and the person responsible arrested." Landau immediately filed a suit, which, after watching the film twice, the Alameda Superior Court declared it as “explicitly and vividly reveal[ing] acts of masturbation, oral copulation, the infamous crime against nature [a euphemism for sodomy], voyeurism, nudity, sadism, masochism and sex," rejecting Landau’s suit while describing it as "cheap pornography calculated to promote homosexuality, perversion and morbid sex practices." The strange thing is that none of these acts in this film are actually portrayed but simply suggested. 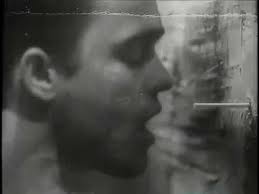 When the case was heard by the US Supreme Court, a 5-4 per curiam decision declared that the film was simply obscene. It had already been banned in other countries.
It is true, the prisoners locked away in jail, do rather go crazy at the hour their sexual desires reach their peak, particularly for the hirsute gay man (André Reybaz) who is in love with the boy next door, a look-alike James Dean (credited simply as Java), and attempts to entice the young man into symbolic sex—since the two have little possibility of actually meeting in the flesh. 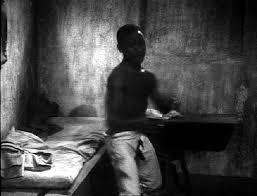 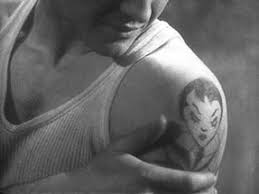 The couple’s frustration is the true subject of the film, as in many of the early scene’s the handsome young man seems more in love with this Betty Boop-like tattoo than with the man improbably attempting to engage him.
And yes, penises do become erect and come out of the clothes in which they are trapped. If the young hot Java, at first, seems more interested in his feet, arm-pits and other body parts than in his penis, he eventually succumbs, reaching into his own stock of straws to pick the largest one—and, of course, in their mutual acts there could be no more potent symbol of the sexual intercourse between the two men—so that we almost literally imagine that their shared smoke represents a kind of “blow job,” each pouring out and sucking it the vital connection it suggests. 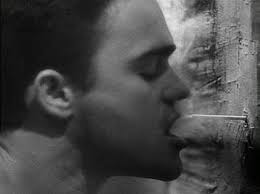 The true criminal acts here are not presented not in their desperate attempts to share love, but by the prison guard, who cannot bear their impossible intimacy. Like the Berkeley police, he dares to finally unlock the door of the sweaty gay lover, pull out his gun, and remove his belt to beat the older man before putting the gun, which we obviously understand is a version of his rusty cock, into Reybaz’s mouth. This is, in fact, sadism, the reason, most certainly, why the courts could not allow the screening of this film: it portrayed them!
While Reybaz is being beaten, moreover, he fantasizes a lovely outdoor celebration with his would-be lover, where the two romp in a forest wilderness, chasing one another around trees and into the bushes before the elder literally carries off the younger for a deep romantic entanglement in the grass. Their love, we realize, is pure, sensual, and caring, while the prison guard’s passion comes from an embarrassed and violent attraction. His love is perverted while the prisoner’s is almost innocent.
We can never know whether in his own moment of desire, the guard actually shoots into the mouth of Reybaz. The nearly 26-moment film ends before we can discover the results. But it doesn’t quite matter. Java and Reybaz have imaginatively had their romantic encounter, despite the definitive refusals of the so-called authorities.
I was only 3 years old at the time of this film, so I can hardly imagine the significance of Genet’s work, and the bravery of Sol Landau and his failed attempts to allow people to see how gay men felt in their cultural—and often literal—imprisonments. It took over 20 years more for some of that to stop in the US. Yet in many countries still today it ends in death.


Posted by greenintegerblog at 8:09 AM