a desert of the heart
by Douglas Messerli

Julián Hernández's 2009 gay masterwork, strangely enough, begins with an encounter between the film’s beautiful young hero, Ryo (Guillermo Villegas) who meets up in a sudden downpour with a woman, Tatei (Giovanna Zacarias), obviously seeking a hook-up, who immediately recognizes in the young man a desire equal to her own. 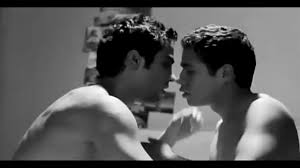 But suddenly we see differences between them as the storm begins and she retreats to covered doorway, while Ryo—in a somewhat gay-like rendition of Gene Kelly’s “Singing in the Rain”—he accepts the full force of the raindrops while inviting her to join him. No umbrella in this movie, and no regrets for the sexual desires that Ryo has for all the human individuals. If he comes off, by film’s end, as not really bi-sexual, he is certainly open to the fullness of human sexuality.
When they finally copulate, Tatei both laughs and cries out in delight and relief. Sex is everything in Hernández’s films, and there is no embarrassment for the sexual act, but simply joy or disappointment.
As some critics have observed, by beginning his gay story of desire with a heterosexual encounter, Hernández normalizes the rest of the movie which some viewers might otherwise find shocking.
For the young Ryo is basically gay, which the Aztec-like prophet Tatei seems to recognized her statements after the sexual encounter.

O, beautiful Ryo, the vigorous. A mighty companion will
come to you. And his vigor will be like a piece of sky.
That is, perfect, superb. Impetuous stream go find him.
Responsibility is in your hands. Be your eyes attentive. Be
careful. Don’t be afraid. Go and liberate the world of this
misfortune. Love will be your guide.

Yet yearning itself seems to be the central subject of this film as the director turns almost all his public spaces, through his camera, into tactile realities. Hernández does not simply show desire between human bodies but between his primarily male figures and the entire space around them. Place itself becomes an important aspect of what these gay figures are seeking, and the languid movement of their actions against the rich velvety feel of his black-and-white images is as important to them as the sexual release they seek. In a sense, sex is not just the release of semen into other men (and women), but is a endless sensual encounter with the world itself. 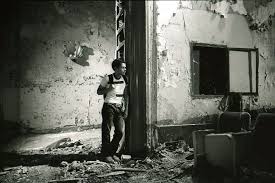 Ryo, armed with a cub-scout-like backpack (not unlike the young boy in search of his youthful belovéd in Wes Anderson’s Moonrise Kingdom), seeks out love in the Mexican city in which he lives.
He first encounters the dark-featured and slightly sinister-appearing Tari (Javier Olivan) on the street with its noirish-like neon lights, and they spend a quite delirious evening with one another.
My poet-friend Paul Vangelisti told me that one time in Rome as a young journalist he attempted to arrange an interview with fellow poet and film-maker Pier Paolo Pasolini. Pasolini agreed to the interview, but strangely, asked Paul to meet up with him at the Coliseum at midnight.
Paul arrived by taxi, standing outside the historical monument to death, hearing inside the moans, groans, and sexual rubbings of lust. Pasolini never showed up, but Paul believed he had been shown a kind of lesson, one which Hernández seems to have quite assimilated: life is all about eros, and eros occurs in the most unlikely of places. 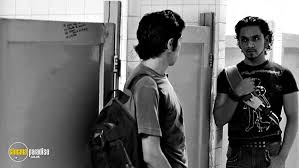 So too does Ryo enter a kind of coliseum in the large local porn house, the paint on its walls peeling, and the central film theater, showing openly gay sexual films, becoming a kind of pit of lust. But as in the real Coliseum, there are other levels to this palace of love, an older decrepit theater seemingly in the basement of the first, where serious seekers of intense gay sex descend, in an almost Dantean way, to find their pleasures.
Tari, quickly spotting the young would-be camper Ryo, follows him, even stalks him in an attempt to reconnect.
Below, the space is even more derelict than the one above, and we can hear and often see the gay sybarites, just as Paul heard from gay and heterosexual lovers outside the Coliseum, lustily involved in lovemaking.
There is a moment when Ryo finally spots his former partner, and might even return to him, but suddenly a younger, far-more handsome boy, Kieri (Jorge Becerra) appears, and Ryo turns instead to him.
If there was ever a cinematic representation of the power of the gay male gaze, Hernández captures it, as suddenly, freed from Ryo’s attention, Tari is almost literally devoured by the others who suddenly come out of the shadows to embrace him and perform fellatio. How could this not help but remind me of the 1995 ballet, Swan Lake, by Matthew Bourne that I saw the other evening, wherein, when the head swan attempts to reclaim the young Prince, the other swans turn on him and nearly devour the lovely young man whom they have all also been long desiring?
Soon after, Tari is raped in a nearby park, and, at least metaphorically, loses his life, dragging his body through a swamp into which he is eventually buried. It is a desert of the heart of nothing else.
While Ryo lies comfortably in bed with his new “knight,” Hernandez explores far deeper issues of desire and love, by digging into Aztec myths, in which the buried Tari rises out of the cracked earth in an attempt to try to redeem his earlier lover, who seems also now to be nakedly tied down in his own demands of lust. 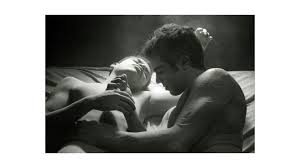 It appears that both Tari and Kieri fight over the attempt to redeem the young adventurer. Whether or not they succeed or who wins over the other is not of great importance, clearly, to the director. The only thing that truly matters is they both do care and try to hold onto his existence, even though we realize that Tari is not the right person for Ryo.
Yearning has gradually turned into nurturing, to a matter of the boy’s survival, his right to survive in a world that tempts him with all the possibilities of eros and the suffering from that desire, a bit like the tortures suffered by Saint Sebastian in Derek Jaman’s work. The arrows of love do also kill, and in suggesting this, the director subtly calls up all the issues of AIDS. And, in the end Kieri offers his own life to save Ryo.
Each segment of Hernández’s trilogy—A Thousand Clouds of Peace (2004), Broken Sky (2006), and Raging Sun, Raging Sky—won a Teddy Award (the premier gay-film recognitions) at its respective Berlinale premiere. But as today, he has now been perceived by the more traditional film world as the significant filmmaker he truly is.
His long list of mentors, Cocteau, Fassbinder, Tsai Ming-Liang, Apichatpong Weerasethakul, and to a certain extent Visconti and André Téchiné have all received their due. Let us hope Hernández soon garners the attention his films demand.

Posted by greenintegerblog at 11:43 AM