in search of a friend
by Douglas Messerli

The Forest for the Trees, German director Maren Ade’s directorial debut, is a tale about of provincial schoolteacher, Melanie Pröschle (Eva Löbau) who has moved to Karlsruhe to work in their prestigious Bose school. It is her first teaching position, which begins, inexplicably, in the middle of the school term. And, equally inexplicable, she is asked to teach math to both third-graders and ninth-graders. She is full of apparently new concepts of pedagogy, but in this far more conservative institution, she is thwarted not only by her fellow teachers, who apparently give higher grades to their students but severely control classroom behaviors, and particularly by the unruly older students themselves, who protest almost any new project she suggests, including a field-trip outing, for which they argue against a trip to a local amusement park. At one point a particularly unruly student thrusts a chocolate milk carton at her at her back; and when she calls in his mother to speak of the incident, the woman sides with her son. 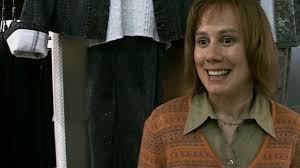 In short, the positive-thinking Melanie is thwarted in almost all her optimistic ideals. One teacher daily displays lovely plants her students have awarded her, but, as Melanie’s only seeming ally Thorsten (Jan Neumann) suggests, purchases the “presents” for herself.
While Thorsten attempts to help and perhaps woe her, Melanie, who apparently has experienced a breakup of her own previous sexual romance, pushes him and his advice aside, attempting to soldier on without the help of others, particularly when she overhears other teachers gossiping about her inabilities to control her classrooms. 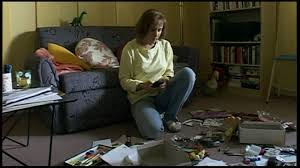 Moreover, she has been unable to find new friends in the city, although she even awards some of her fellow apartment-dwellers with house-warming gifts which they might have been awarding her. The work she spends on planning for new teaching projects mostly turns her under-decorated apartment into a mess. And as she grows in the depression of what she projected as a new life, her calls home to her mother end in near-disaster as her mother attempts to probe the underlying cause of these calls.
In short, Melanie is left entirely alone in a new world, vulnerable to depression at work and at home. If there ever was a film to demonstrate the difficulties teachers daily face—and there have been numerous others (think of Up the Down Staircase or the earlier Blackboard Jungle)—this somewhat quieter version of the dilemmas of attempting to help a younger generation learn is a model. I left the university, with basically good experiences nearly four decades ago, but I have heard from peers about just how difficult it now is to try to help young closed and seemingly privileged minds to question their values, a necessary event if we want to truly educate our children.*
Shopping for a new outfit that might slightly intimidate her misbehaved students, Melanie meets the shopkeeper Tina (Daniela Holtz), whom she soon after discovers lives in the apartment across from hers—almost completely visible from Melanie’s vantage point.
The two, at first, strike up a kind of friendship, Tina inviting her neighbor into her far nicer apartment, and even befriending her, at one point hiding out in Melanie’s apartment, as the two slug down glasses of homemade schnapps, while Tina watches her angry boyfriend return to her space. The event seems to create a bond between the two that only Melanie truly assimilates. 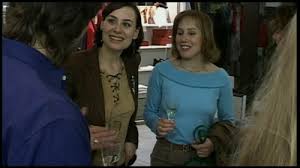 Let me clarify: this is not a lesbian movie; there is no sexual interrelationship between these two women. But it might as well be, as Melanie becomes more and more attached to her new “friend,” spying on her, often through binoculars (which have been donated for her classes’ failed field trip) and, ultimately, even slightly stalking her new-found friend, showing up even at a rather elegant celebration in her haute clothing shop in a frowsy coat to talk to Tina’s clients about the difficulty of teaching.
In other words, this might as well be a lesbian film, since Melanie is now almost infatuated with Tina to the degree that when her friend finally attempts to include her in her birthday party, the schoolteacher suggests to her arriving ex-boyfriend, Tobias, that he leave, while she delivers the roses he had brought to her new friend.
The politics of this “friendship” are now quite clear; Melanie is attempting to replace Tobias in Tina’s life. If this relationship is outwardly simply a close connection between suffering women, it has now unfurled into something else, and Tina’s response of now isolating herself from the voyeur of her life is totally comprehensible, while it is also quite devastating to Melanie.
Melanie, always the outsider in the new world into which she bravely has entered, later observes the couple mocking her, as she looks down from her apartment upon them. 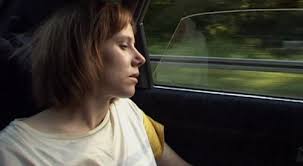 With the school vacation over, Melanie takes her own day off, driving her car down a freeway on cruise control, and suddenly, releasing her hands from the wheel, jumping over into the back seat to calmly observe the results. 2003, the date of the film, was long before cars might possibly be driven electronically by themselves. We know what the result will be. Melanie may be outwardly mourned, but she will never have discovered much love in her life. She has been a clumsy and desperate would-be lover for her students and both her heterosexual and woman friends.
Ade’s first film was a kind of tragedy about idealism meeting up with truly cynical aspects of real life. Her later figures become kinds of clowns who persevere in worlds of near-disaster, living and surviving despite themselves.

*There were only two instances of student rebellion in my teaching experiences: the first was when a freshman class in literature were appalled when I taught Jonathan Swift; having lost the concept of irony, they hated the writer for suggesting that the English might boil and eat the Irish children. But the worst was with a bitter group of graduate students to whom I attempted to teach Williams and Pound. They hated Williams because of his dismissal of the acaedym and hated me because, even though I had them purchase the Index to Pound’s references in the Cantos, I suggested that the author often explained those references later in the text, and that the index was not truly necessary. However, the wonderful Tenney Nathanson came out of that angry class as a friend and made a significant career for himself.

Posted by greenintegerblog at 9:23 AM